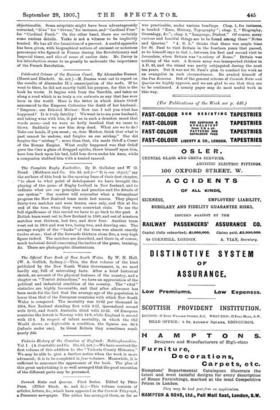 The Official Year Book of New South Wales. By W.

H. Hall. (W. A. Gullick, Sydney.)—This, the first volume of the kind published by the New South Wales Government, is, we need hardly say, full of interesting facts. After a brief historical sketch, an account of the physical features of the country, and a chapter on "Tourist Attractions," we have an appreciation of the political and industrial condition of the country. The "vital" statistics are highly favourable, and that after allowance has been made for the fact that the average age of the population is lower than that of the European countries with which New South Wales is compared. The mortality was 10.62 per thousand in 1904, New Zealand standing first with 9'57, Queensland second with 10.01, and South Australia third with 10.22. Of European countries the lowest is Norway with 14-8, while England is second with 154. In respect of infant mortality, in which the Old World shows so deplorable a condition, the figures are 82.4 (infants under one). In Great Britain they sometimes reach nearly 200.