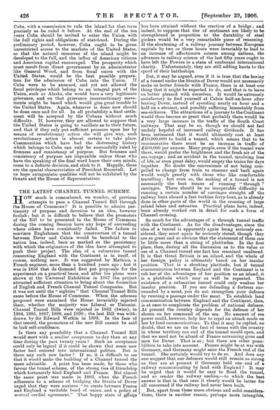 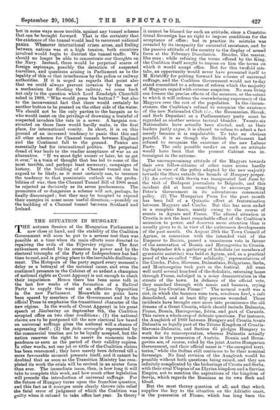 THE LATEST CHANNEL TUNNEL SCHEME. H OW much is remembered, we

wonder, of previous attempts to pass a Channel Tunnel Bill through the House of Commons ? It is possible to admire per- tinacity of purpose and devotion to an idea, however foolish ; but it is difficult to believe that the promoters of the Bill to be presented to the House of Commons during the coming Session have any hope of succeeding where others have consistently failed. The failure to 'convince Englishmen that the construction of a tunnel between Dover and Calais would be beneficial to the nation has, indeed, been as marked as the persistency with which the originators of the idea have attempted to push their project. The idea of a submarine tunnel .connecting England with the Continent is in itself, of course, nothing new. It was suggested by Mathieu, a French engineer, more than a hundred years ago ; but it was in 1856 that de Gamond first put proposals for the experiment on a practical basis, and after his plans were shown at the Universal Exhibition in 1867 the project attracted sufficient attention to bring about the formation of English and French Channel Tunnel Companies. But it was not until the " eighties " that Channel Tunnel Bills came before the House of Commons. When the schemes proposed were examined the House invariably rejected them, whether the majority was Liberal or Unionist. Channel Tunnel Bills were rejected in 1882 (twice), in 1884, 1885, 1887, 1888, and 1890; the last Bill was with- drawn by Sir Edward Watkin in 1893. In the face of that record, the promoters of the new Bill cannot be said to lack self-confidence.

Is there any possibility that a Channel Tunnel Bill would meet with a readier acceptance to-day than at any time during the past twenty years ? Such an acceptance could only be logical if it could be shown that some new factor had entered into international politics. But is there any such new factor ? If so, it is difficult to see that it would make the building of a Channel tunnel the more advisable. A point has been made, by those who favour the tunnel scheme, of the strong ties of friendship which fortunately bind England and France. But almost the same point was made in 1883, when the French adherents to a scheme of bridging the Straits of Dover urged that they were anxious "to create between France and England a veritable bond of union, and a policy of mutual cordial agreement." That happy state of Again; has been attained without the erection of a bridge ; and indeed, to suppose that ties of sentiment are likely to be strengthened in proportion to the durability of steel girders would be a very remarkable piece of reasoning. If the shortening of a railway journey between European capitals by two or three hours were invariably to lead to an increase of affectionate esteem among nations, the advances in railway science of the last fifty years ought to have left the Powers in a state of exuberant international charity. Unfortunately, they are still adding knots to the speed of their battleships.

But, it may be argued, even if it is true that the boring of a tunnel under the Straits of Dover would not necessarily make us better friends with France, there is at least one thing that it might be expected to do, and that is to leave us better pleased with ourselves. It would be extremely satisfactory to find yourself at Calais half-an-hour after leaving Dover, instead of spending nearly an hour and a half on a steamer, and possibly suffering lamentably from sea-sickness. The attractions of a journey to the Continent would. thus become so great that probably there would be a very large increase in the traffic of the South Coast railways. That may be so, though we should not feel unduly hopeful of increased railway dividends. It has been estimated that it would ultimately cost at least 210,000,000 to build a tunnel, which means that to be remunerative there must be an increase in traffic of 2400,000 per annum. Many people, even if the tunnel were there, would prefer the brightness and the fresh air of the sea-voyage ; and an accident in the tunnel, involving loss of life, or even great delay, would empty the trains for days together. No doubt the convenience of not being com- pelled to change from train to steamer and back again would weigh greatly with those who like comfortable travelling; but even so, the making of a tunnel is not necessarily the best means of running " through ? carriages. There should be no insuperable difficulty in running a certain number of carriages straight off the railway lines aboard a fast turbine ferry-boat, as is already done in other parts of the world in the crossing of large inland lakes and estuaries. Practical plans have, indeed, been already worked. out in detail for such a form of Channel crossing.

So much for the advantages of a through tunnel traffic with the Continent. As for the disadvantages, since the idea of a tunnel is apparently again being seriously con- sidered, they must again be seriously stated, though they are so great and so obvious that the statement of them can be little more than a string of platitudes. In the first place, then, during all the discussion as to the value or use of a Channel tunnel one fact has remained unaltered. It is that Great Britain is an island, and the whole of her foreign policy is ultimately based on her insular position. That is a shocking platitude, but if tunnel communication between England and the Continent is to rob her of the advantages of her position as an island, it is a platitude which may as well be repeated. The existence of a submarine tunnel could only weaken her insular position. If you are defending a fortress say. rounded. by a moat, you do not strengthen your defence by running a passage under the moat. To establish land communication between England. and the Continent, then, is at once to complicate the problem of national defence. At present the country depends for the defence of her shores on her command of the sea. No amount of sea power could, however, help her to repel an attack made on her by land communications. To that it may be replied, no doubt, that we are on the best of terms with the country in whose territory one end of the tunnel would open, and that we need not be afraid of France entraining guns and men for Dover. That is so ; but there are other possi- bilities to take into account. France might be at war with Germany, and Germany might seize the French end of the tunnel. She certainly would. try to do so. And does any one suggest that our defences would still remain as strong as they are at present if , Germany held one end of a railway communicating by land with England ? It may be urged that it would be easy to flood the tunnel, and so render the railway useless,—to which the best answer is that in that case it clearly would be better for all concerned if the railway had never been built.

But, apart from these more obvious and solid considera- tions, there is another reason, perhaps more intangible. but in some ways more terrible, against any tunnel scheme that can be brought forward. That is the certainty that the existence of the tunnel would lead to recurrent national panics. Whenever international crises arose, and feeling between nations was at a high tension, both countries involved would begin to distrust the tunnel traffic. We should no longer be able to concentrate our thoughts on the Navy. Instead, there would be perpetual scares of foreign espionage, possibly the detention of suspected travellers, and questions arising in Parliament as to the legality of this or that interference by the police or railway authorities. If it is urged as regards that point also that we could always prevent invasion by the use of a mechanism for flooding the railway, we come back not only to the question which Lord Randolph Churchill asked in 1888, "Who would press the button ? " but also to the inconvenient fact that there would certainly be another button to be pressed on the other side of the water. We should not be the only parties to the bargain as to who would insist on the privilege of drowning a trainful of suspected invaders like rats in a sewer. A bargain con- structed on those lines would hardly make, in the first place, for international comity. In short, it is on this ground of an increased tendency to panic that this and all other schemes for Channel tunnels between England and the Continent fall to the ground. Panics are essentially bad for international politics. The perpetual dread of war leads to the readier acceptance of war as an alternative. "If we must fight sooner or later, let us get it over," is a train of thought that has led to some of the most terrible, and perhaps least necessary, campaigns of history. If the building of a Channel tunnel can be argued to be likely, as it most certainly can, to increase the tendency to that pessimistic outlook on the proba- bilities of war, then the Channel Tunnel Bill of 1906 must be rejected as decisively as its seven predecessors. The promoters of so a a scheme will not, perhaps, be finally discouraged ; but they may be tempted to expend their energies in some more useful direction,--possibly on the building of a Channel tunnel between Scotland and Ireland.