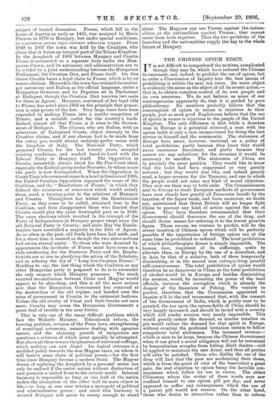 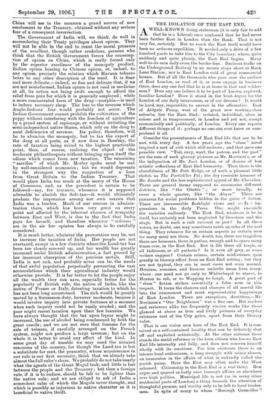 IT is not difficult to comprehend the motives, complicated though they may be, which have induced the Chinese Government, not, indeed, to prohibit the use of opium, but to order a Commission of Inquiry into the best means of prohibiting it within the next ten years. Its main object is evidently the same as the object of all its recent action,— that is, to obtain complete control of its own people and its own resources. We do not believe, as some of our contemporaries apparently do, that it is guided by pure philanthropy. Its members probably believe that the consumption of opium in excess is injurious to their people, just as most good Englishmen believe that the use of spirits in excess is injurious to the people of the United Kingdom. The only difference is that while a drunken man in Europe is a potential criminal, a man with the opium habit is only a man incapacitated for doing the best service to himself and the community. The statesmen of Europe have never, however, ventured on a policy of total prohibition, partly because they know they would cause enormous discontent, and partly because they cannot see any substitute for the revenues it would be necessary to sacrifice. The statesmen of China are in precisely the same position. They would like to know that the habit. had been suppressed or very greatly reduced ; but they would also like, and indeed greatly need, a larger revenue for the Treasury, and one to which the people could not raise any kind of moral objection. They now see their way to both ends. The Commissioners sent to Europe to study European methods of- government have seen clearly bow greatly all Treasuries benefit by the taxation of the liquor trade, and have, moreover, we doubt not, ascertained that Great Britain will no longer fight China to prevent any kind of action against the use of opium. They have therefore recommended that their Government should denounce the use of the drug, and should devise means for reducing it to the lowest possible figure. Those means, we venture to predict, will he the severe taxation of Chinese opium which will be perfectly possible if the importation of foreign opium can at the same time be prohibited or reduced. The total prohibition of which philanthropists dream is simply impossible. The human race, impatient of its sufferings, seeks to alleviate them, in Europe by the use of a stimulant, and in Asia by that of a sedative, both of them temporarily diminishing, or in the second case extingui3hing, painful self-consciousness. The total prohibition of opium would therefore be as dangerous in China as the total prohibition of alcohol would be in Europe, and besides diminishing the revenue, would, by increasing the power of the local officials, increase the corruption which is already the despair of the financiers at Peking. We venture to predict, therefore, that the Commission appointed to inquire will in the end recommend that, with the consent of the Government of India, which is pretty sure to be granted, the tax upon the opium-fields of China should be very largely increased, and should be levied with a severity which will render evasion very nearly impossible. This would greatly reduce the demand, as similar taxation on gin would reduce the demand for that spirit in Europe, without creating the profound irritation certain to follow compulsory total abstinence. The increased revenue— which is sure to be large, because the Chinese Government when it can plead a moral obligation will not be restrained by humanitarian scruples from killing illicit dealers—will be applied to maintain the new Army, and thus all parties will alike be satisfied. Those who dislike the use of the drug will find that the poor are moderating their doses, which is from the point of view of the benevolent a great gain, the real objection to opium being the horrible con- sequences which follow its use in excess. The ablest Chinaman whom the writer of these words ever saw confined himself to one opium pill per day, and never appeared to suffer any consequences which the use of a patent pill would not remove. On the other hand, those who desire to strengthen rather than to reform China will see in the measure a grand source of new emolument to the Treasury, obtained without any serious fear of a consequent insurrection.

The Government of India will, we think, do well in surrendering their Treaty privileges about opium. They will not be able in the end to resist the moral pressure of the excellent, though rather credulous, persons who think that the British Government forces the consump- tion of opium on China, which is really forced only by the superior excellence • of the monopoly product, -Indian opium bearing to Chinese opium, or, indeed, to any opium, precisely the relation which Havana tobacco bears to any other description of the weed. It is finer and more delicate,—indeed, so fine and delicate that, if we are not misinformed, Indian opium is not used in medicine at all, its action not being swift enough to afford the relief from pain for which it is generally employed ; while a. more concentrated form of the drug—morphia—is used to induce necessary sleep. The loss to the revenue which Anglo-Indians fear would probably not occur. The Indian Government cannot prohibit the cultivation of the poppy without interfering with the freedom of agriculture by a grand system of espionage, or without irritating the semi-independent native States, which rely on the drug to meet deficiencies of revenue. Its policy, therefore, will be to abandon the monopoly, but to lila the export of the drum at all ports, as it now does in Bombay, the rate of drug being raised to the highest practicable point, thus, of course, realising the object of the Moderate philanthropists without bringing upon itself the odium which comes from new taxation. The remaining " sacrifice " of which Mr. Morley spoke must be met by well-considered economies; but we would deprecate in the strongest way the suggestion of a loan from Great Britain to the Indian Treasury. That would place India.too much at the mercy of the House of Commons, and, as the precedent is certain to be followed—say, for instance, whenever it is supposed advisable to abolish the Salt-tax—it would ultimately produce the impression among our own masses that ,India was a burden. Much of our success in adminis- tration there, which has been very great on every point not affected by the inherent absence of sympathy between East and West, is due to the fact that India • pays for herself, and therefore whenever " reforms " are in the air her opinion has always to be carefully considered.

It is much better, whatever the provocation may be, not to increase the taxation of India. Her people are not overtaxed, except in a few districts where the Land-tax has been too closely screwed up, and her wealth has greatly increased under British administration, a fact proved by her incessant absorption of the precious metals. Still, India is not rich, and probably never can be, the needs of that awful population perpetually preventing the vast accumulations which their agricultural industry would otherwise provide. It is far better to let the people enjoy all the wealth they can save, especially better for the popularity of British rule, the native of India, like the native of France or Italy, detesting taxation to which lie has not been long accustomed. The rich would be greatly moved by a Succession-duty, however moderate, because it would involve inquiry into private fortunes at a moment when such inquiry could not be easily evaded ; and the poor might resent taxation upon their few luxuries. We have always thought that the tax upon liquor might be increased, the use of alcohol being condemned by both the great creeds; and we are not sure that licenses for the sale of tobacco, if carefully arranged on the French system, might not produce a large revenue ; but on the whole it is better to avoid any effort of the kind. In some great day of trouble we may need the untaxed resources of the country, for though the Land-tax is but a substitute for rent, the peasantry, whose acquiescence in our rule is our first necessity, think that we already take almost the full ruler's share. We probably do not take nearly what the agents of the Great Mogul tool, and little is lost between the people and the Treasury ; but then a foreign rule, if it is to endure, should be felt to be lighter than the native rule; and we are obliged to ask of India a somnolent calm of which the Moguls never thought, and which is possibly as injurious to native character as it is beneficial to native thrift.