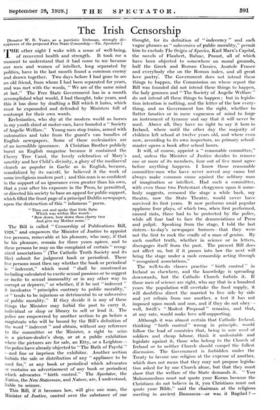 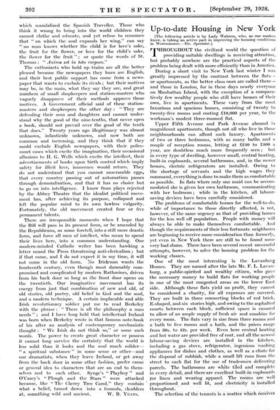 [Senator W. B. Yeats, as a patriotic Irishman, strongly dis- approves of the proposed Free State Censorship.—ED. Spectator.] THE other night I woke with a sense of well-being, of recovered health and strength. It took me a moment to understand that it hid come to me because our men and women of intellect, long separated by polities, have in the last month found a common enemy and drawn together. Two days before I had gone to see an old friend, from whom I had been separated for years, and was met with the words, " We are of the same mind at last." The Free State Government has in a month accomplished what would, I had thought, take years, and this it has done by drafting a Bill which it hates, which must be expounded and defended by Ministers full of contempt 'for their own words.

Ecclesiastics, who shy at the modern world as horses in my youth shied at motor-cars, have founded a " Society of Angelic Welfare." Young men stop trains, armed with automatics and take from the guard's van bundles of English newspapers. Some of these ecclesiastics are of an incredible ignorance. A Christian Brother publicly burnt an English magazine because it contained the Cherry Tree Carol, the lovely _celebration of Mary's sanctity and her Child's divinity, a glory of the mediaeval church as popular in Gaelic as in English, because, scandalized by its naiveté, he believed it the work of some irreligious modern poet ; and this man is so confident in the support of an ignorance even greater than his own, that a .year after his exposure in the Press, he permitted, or directed his society to base an appeal for public support, which filled the front page of a principal Dublin newspaper, upon the destruction of this " infamous " poem.

" Then out and spoke that little Babe Which was within Her womb : ' Bow down, bow down thou cherry tree And give my Mother some.' "

The Bill is called " Censorship of Publications Bill, 1928," and empowers the Minister of Justice to appoint five persons, removable at his pleasure, who may, if that be his pleasure, remain for three years apiece, and to these persons he may on the complaint of certain " recog- nized associations " (The Catholic Truth Society and its like) submit for judgment book or periodical. These five persons must then say whether the book or periodical is " indecent," which word " shall be construed as including calculated to excite sexual passions or to suggest or incite to sexual immorality or in any other way to corrupt or deprave," or whether, if it be not " indecent " it inculcates " principles contrary to public morality," or " tends to be injurious or detrimental to or subversive of public morality." If they decide it is any of these things the Minister may forbid the post to carry it, individual or shop or library to sell or lend it. The police are empowered by another section to go before a magistrate who will be bound by the Bill's definition of the word " indecent " and obtain, without any reference to the committee or the Minister, a right to seize. in a picture-dealer's shop, or at a public exhibition where the pictures are for sale, an Etty, or a Leighton—. the police have already objected to " The Bath of Psyche " —and fine or imprison the exhibitor. Another section forbids the sale or distribution of any " appliance to be used for," or any book or periodical which advocates or contains an advertisement of any book or periodical which advocates " birth control." The Spectator, the Nation, the New States-man, and Nature, are, I understand, liable to seizure. - This Bill, if it becomes law, will give one man, the. Minister of Justice, control over the substance of our thought, for its definition of " indecency " and such vague phrases as " subversive of public morality," permit • him to exclude The Origin of Species, Karl Marx's Capital, the novels of Flaubert, Balzac, Proust, all of which have been objected to somewhere on moral grounds, half the Greek and Roman Classics, Anatole France and everybody else on the Roman index, and all great love poetry. The Government does not intend these things to. happen, the Commission on whose report the Bill was founded did not intend these things to happen, the holy gunmen and " The Society of Angelic Welfare" do not intend all these things to happen ; but in legisla- tion intention is nothing, and the letter of the law every- thing, and. no Government has the right, whether to flatter fanatics or in mere vagueness of mind to forge an instrument of tyranny and say that it will never be used. Above all, they have no right to say it here in Ireland, where until the other day the majority of children left school at twelve years old, and where even now, according to its own inspectors, no primary school- master opens a book after school hours.

It will, of course, appoint a " reasonable committee," and, unless the Minister of Justice decides to remove one or more of its members, four out of five must agree before anything happens. I know those reasonable committee-men who have never served any cause but always make common cause against the solitary man of imagination or intellect. Had such a committee, with even those two Protestant clergymen upon it some- body suggests, censored the stage a while back, my theatre, now the State Theatre, would never have survived its first years. It now performs amid popular applause four plays, of which two, when first performed, caused riots, three had to be protected by the police, while all four had to face the denunciations of Press and pulpit. Speaking from the stage, I told the last rioters—to-day's newspaper burners—that they were not the first to rock the cradle of a man of genius. By such conflict truth, whether in science or in letters, disengages itself from the past. The present Bill does not affect us, but if it passes into law the next will bring the stage under a mob censorship acting through " recognized associations."

The well-to-do classes practise " birth control " in Ireland as elsewhere, and the knowledge is spreading downwards, but the Catholic Church forbids it. If those men of science are right, who say that in a hundred years the population will overtake the food supply, it will doubtless direct the married to live side by side and yet refrain from one another, a test it has not imposed upon monk and nun, and if they do not obey— well, Swift's " Modest Proposal " remains, and that, at any rate, would make love self-supporting.

Although it was almost certain that Catholic Ireland, thinking "birth control" wrong in principle, would follow the lead of countries that, being in sore need of soldiers and cheap labour, think it undesirable and legislate against it, those who belong to the Church of Ireland or to neither Church should compel 'the fullest discussion. The Government is forbidden under the Treaty to favour one religion at the expense of another, which does not mean that they may not propose legisla- tion asked for by one Church alone, but that they must show that the welfare of the State demands it. " You Mahommedans must not quote your Koran because the Christians do not believe in it, you Christians must not quote your Bible," said the chairman at the religious meeting in . ancient Damascus—or was it Bagdad ?— which scandalized the Spanish Traveller. Those who think it wrong to bring into the world children they cannot clothe and educate, and yet refuse to renounce that " on which the soul expands her wing," can say " no man knows whether the child is for love's sake, the fruit for the flower, or love for the child's sake, the flower for the fruit " ; or quote the words of St. Thomas : " Anima est in Coto corpore."

The enthusiasts who hold up trains are all the better pleased because the newspapers they burn are English, and their best public support has come froM a news- paper that wants to exclude its rivals ; but their motives may be, in the main, what they say they are, and great numbers of small shopkeepers and station-masters who vaguely disapprove of their methods approve those motives. A Government official said of these station- masters and shopkeepers the other day : " They are defending their sons and daughters and cannot under- stand why the good of the nine-tenths, that never open a book, should not prevail over the good of the tenth that does." Twenty years ago illegitimacy was almost unknown, infanticide unknown, and now both are common and increasing, and they think that if they could exclude English newspapers, with their police- court cases which excite the imagination, their occasional allusions to H. G. Wells which excite the intellect, their advertisements of books upon birth control which imply safety for illicit love, innocence would return. They do not understand that you cannot unscramble eggs, that every country passing out of automatism passes through demoralization, and that it has no choice but to go on into intelligence. I know from plays rejected by the Abbey Theatre that the idealist political move- ment has, after achieving its purpose, collapsed and left the popular mind to its own lawless vulgarity. Fortunately, the old movement created four or five permanent talents.

There are irresponsible moments when I hope that the Bill will pass in its present form, or be amended by the Republicans, as some foretell, into a still more drastic form, and force all men of intellect, who mean to spend their lives here, into a common understanding. One modem-minded Catholic writer has been hawking a letter round the Press threatening anti-clericalism ; but if that come, and I do not expect it in my time, it will not come in the old form. No Irishman wants the fourteenth century, even though most damnably com- promised and complicated by modem Rathmines, driven from his back door so long as the front door opens on the twentieth. Our imaginative movement has its energy from just that combination of new and old, of old stories, old poetry, old belief in God and the soul, and a modern technique. A certain implacable and able Irish revolutionary soldier put me to read Berkeley With the phrase : There is all the philosophy a man needs " ; and I have long held that intellectual Ireland was born when Berkeley wrote in that famous note-book of his after an analysis of contemporary mechanistic thought : " We Irish do not think so," or some such words. The power to create great character or possess it cannot long survive the certainty that the world is less solid than it looks and the soul much solider- " a spiritual substance " in some sense or other—and our dramatists, when they leave Ireland, or get away from the back door in some other fashion, prefer cause or general idea to characters that are an end to them- selves and to each other. Synge's " Playboy " and O'Casey's " Plough and the Stars " were attacked because, like " The Cherry Tree Carol," they contain • What a belief, tamed down into a formula, shudders at, something wild and ancient. W. B. YEATS.