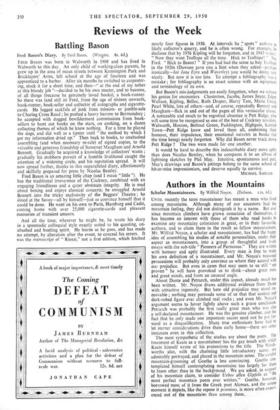 Fred Bason's Diary. By Fred Bason. (Wingate. 8s. 6d.) FRED BASON was born in Walworth in 1908 and has lived in Walworth to this day. An only child of working-class parents, he grew up in the area of mean streets between Kennington Park and Bricklayers' Arms, left school at the age of fourteen and was apprenticed to a barber. After six months he switched to carpenter- ing, stuck it for a short time, and then—" at the end of my tether at this bloody job "—decided to be his own master, and to become, of all things (because he genuinely loved books), a book-runner. So there was (and still is) Fred, from the age of sixteen onwards, book-runner, book-seller and collector of autographs and cigarette- cards. He lugged sackfuls of junk from mission- or jumble-sale to Charing Cross Road he pushed a heavy barrow to Bermondsey ; he accepted with dogged bewilderment commissions from book- sellers to hunt out books on the stars, on cooking, on a dozen collecting themes of which he knew nothing. For a time he played the dogs, and did well as a tipster until " the method by which I got my information dried up." Then back to books, to unabashed assembling (and when necessary re-sale) of signed copies, to the valuable and generous friendship of Somerset Maugham and Arnold Bennett. Gradually he acquired a knowledge of collectors' wants ; gradually his stubborn pursuit of a humble livelihood caught the attention of a widening circle, and his reputation spread. It will now spread further, thanks to this unparalleled diary, affectionately and skilfully prepared for press by Nicolas Bentley.

Fred Bason is an amazing little chap (and I mean " little "). He has the traditional irreverence of the Cockney, combined with an engaging friendliness and a queer obstinate integrity. He is mad about boxing and enjoys classical concerts; he smuggled Arnold Bennett Anto the tricky exclusivity of the Beggars' Theatre; he dined at the Savoy—all by himself—just to convince himself that it could be done. He went on his own to Paris, Hamburg and Cadiz, coming home with over 25,000 cigarette-cards and pleasant memories of transient amours.

And all the time, wherever he might be, he wrote his diary in a spasmodic colloquial style exactly suited to his questing, un- abashed and bustling spirit. He learns as he goes, and has made no attempt, by alteration after the event, to conceal his errors. It was the manuscript of " Rienzi," not a first edition, which fetched nearly four figures in 1930. At intervals he " spots " authors as likely collector's quarry, and he is often wrong. For example, he declares that by 1956 Kipling will be forgotten, and in 1945 writes: " Now they want Trollope all the time. Hick to Trollope! " No, Fred. " Hick to Bason l If you had had the sense to buy Trollope in the 1920s (Dawson gave you a hint when they asked—perhaps ironically—for Jane Eyre and Waverley) you would be doing very nicely. But now it is too late. To attempt a bibliography was a mistake ; for bibliography is an exact science with an equipment and terminology of its own.

But Bason's mis-judgements are easily forgotten, when we witness his genius for encounters. Chesterton, Jacobs, James Joyce, Edgar Wallace, Kipling, Belloc, Ruth Draper, Harry Tate, Marie Lloyd, Pearl White, lots of others—and, of course, repeatedly Bennett and Maugham—flick in and out of the pages of this vernacular classic. A noticeable and much-to be regretted absentee is Pett Ridge, who will some time be recognised as one of the best of Cockney novelists. Walworth, Hoxton, Bethnal Green, Paddington, Highgate, Kentish Town—Pett Ridge knew and loved them all, enshrining their humour, their impudence, their emotional naivetes in books (for the time being) nearly forgotten. Why did Bason never track down Pett Ridge ? The two were made for one another.

It would be hard to describe this indescribable diary more aptly than does Nicolas Bentley, when he compares it to an album of lightning sketches by Phil May. Intuitive, spontaneous and pert, May's drawings and Bason's jottings belong to the same school of hit-or-miss impressionism, and deserve equally to survive.