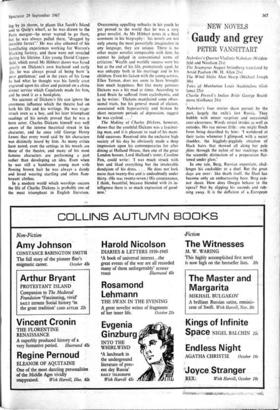 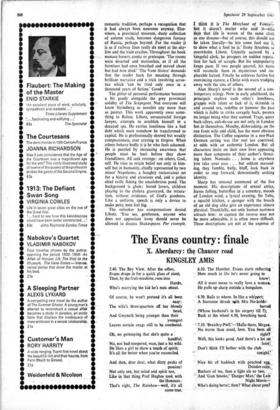 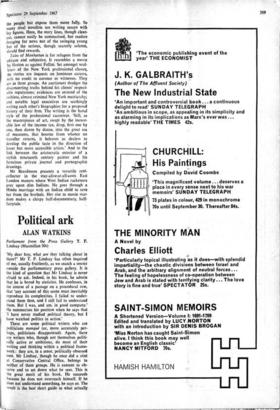 Nabokov's four stories share pursuit - by the past,.. largely the exile's lost Russia. They bubble with minor surprises and occasional over-cleverness. Words reveal insides as: well as outsides. His eye misses little: one might flinch from being described by him: 'I wondered at their tastes wheneVer I glimpsed, with .a secret shudder,' the higgledy-piggledy striation of black hairs that showed all along her pale .khins through the nylon of her stockings with the scientific distinction of a preparation flat-

In one tale, Berg, Russian expatriate, chal- lenges his cuckolder to a duel. But the great days are over: like death itself, the Duel has become only an embarrassing bore. Berg can- not shoot. How does Onegin behave in the 'opera? Not by slipping his seconds and 'Vi- ning away. It is the deflation of a:. European

romantic tradition, perhaps a recognition that it had always been nonsense anyway. Else- where, a provincial museum, dusty collection of solemn trash, becomes dangerous fantasy of Russia, perhaps beyond. For the reader it is as if railway lines really do meet at the sky- line and the train crashes. Throughout the book menace hovers, comic or grotesque. The rooms were deserted and motionless, as if all the furniture had once breathed and moved about but had now died.' The Vane Sisters' demands that the reader hack for meaning through brilliant narrative and a trick involving acros- tics which 'can be tried only once in a thousand years of fiction.' Good!

The glitter of personal performance becomes a bit gaudy alongside the grey provincial solidity of The Scapegoat. Not everyone will know Strindberg as novelist any more than as painter. This work apparently owes some- thing to Balzac. Libotz, unsuccessful foreign lawyer, attempts to establish himself in a decayed spa. He carries loneliness like a bad debt which must somehow be transformed to capital. He is professionally shrewd but weakly compassionate, ever craving to forgive. When others behave badly it is he who feels ashamed. He is puzzled by increasing awareness that people must be hurt before they show friendliness. All seek revenge: on others, God, self. He tries to retain belief not only in him- self but in humanity, chiefly represented by two minor Napoleons, a haughty restaurateur set for a bizarre and atrocious end, and a police chief evilly fishing the unsalubrious pond. The background is glum: bored lovers, children playing in the cholera graveyard, the reitera- tion, without evidence, of God's goodness. Like a uniform, speech is only a device to make petty men feel big.

The onlooker has compensations denied Libotz. `You see, gentlemen, anyone who does not appreciate irony should never be allowed to discuss Shakespeare. Par example, I think it is The Merchant of Venicef-- but it doesn't matter who said itsYliO stays that life is woven of the same cloth as our dreams—but of course, this should not be taken literally—he lets some fool say

to show what a fool he is.' Irony threatens to overwhelm Libotz. Unjustly accused by a vengeful clerk, he prospers on sudden reputa- tion for lack of scruple. But his unpopularity keeps pace. If two people quarrel, his name will reconcile them in mysterious and im- placable hatred. Finally he achieves furtive but convincing stature, a Christ with warts trudging away with the sins of others.

Alan Sharp's novel is the second of a con- temporary trilogy. Now in early adulthood, the principals explore each other's loneliness, grapple with talent or lack of it, skirmish in and around sex, redefine or humour the past which is liable to strike savagely back, parents no longer being what they seemed. Traps, queer back-alleys, culs-de-sac are not only in London but in themselves. Moseby, dishwashing, on the run from wife and child, has the most obvious distinction. The Cuffee sequence in a neo-Nazi German setting was (for me) too contrived, at odds with an authentic London. But all characters insist on their own lives appearing more than symptoms of their author's thrust- ing talent. Nomadic . . . home is anywhere You take your ease . . . but seldom maraud- ing, they fumble, bully, bluff, look back in order to step forward, determinedly seeking identity.

Sharp has unusual command of the live moment. His descriptions of sexual antics, leayes falling, butterflies in a cemetery, moods of London wind, a lyrical evening, the Tube, a squalid kitchen, a sponger with the breath of an old dog alike give an experience almost physical. Thankfully, not only human nastiness attracts him: to capture the reverse may not be more admirable, it is often more difficult. These descriptions are not at the expense of the people but expose them more fully. So many rival novelists are writing essays with jay figures. Here, the story lines, though clear- cut, cannot easily be summarised, but readers foraging for news not of the swinging young but of the serious, though scarcely solemn, should find rewards.

Tales of Manhattan is for refugees from the oblique and subjective. It resembles a movie by Huston as against Fellini. Set amongst soul- losers of the New York professional classes, the stories are inquests on luminous careers, with no credit to coroner or witnesses. They are in three groups. An auctioneer dredges the disconcerting truths behind his clients' respect- able reputations; evidences are secured of the ruthless, almost criminal New York matriarchy; and notable legal executives are scathingly writing each other's biographies for a proposed history of their firm. The writing is the banal style of the professional raconteur. 'Still, as the masterpieces of art, swept by the inexor- able law of the income tax, drop, first one by one, then dozen by dozen, into the great sea of museums, that bourne from whence no traveller returns, it behoves us dealers to develop the public taste in the direction of lesser but more accessible artists.' And to the link between the aristocratic exterior of a stylish nineteenth century painter and his ferocious private journal and pornographic drawings.

Mr Beardmore presents a versatile rent- collector in the stay-alive-at-all-costs East London manors where West Indian racketeers prey upon dim Indians. He goes through a Hindu marriage with an Indian child to save her from the brothels. Her rise to movie star- dom makes a chirpy half-documentary, half- fairytale.