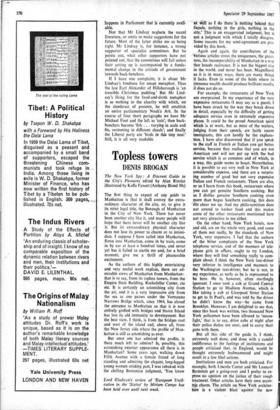 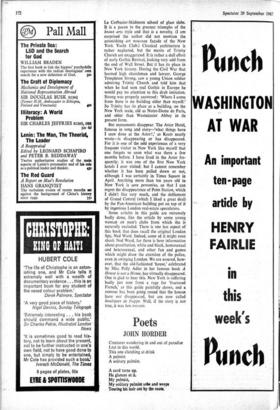 The first thing to expect of any guide to Manhattan is that it shall convey the extra- ordinary character of the city, or, to give it its strict legal title, the Borough of Manhattan in the City of New York. There has never been another city like it, and many people will hope that there never will be another city like it. But its extraordinary physical character does not lose its power to charm or to intimi- date. I suppose I have sailed into Manhattan, flown into Manhattan, come in by train, come in by car at least a hundred times, and never yet has it failed to startle me and, for a brief moment, give me a thrill of pleasurable excitement.

As the authors of this highly entertaining and very useful work explain, there are ad- mirable views of Manhattan from Manhattan: that is to say, from its topless towers, from the Empire State Building, Rockefeller Center, etc etc. It is certainly an astonishing city from the air, and it is a very impressive city from the sea as one passes under the Verrazano Narrows Bridge which, since 1964, has closed the entrance to Manhattan so that it is now entirely girdled with bridges and Staten Island has lost its old immunity to development. But the best view, I think, is from the bridges east and west of the island and, above all, from the New Jersey side where the profile of Man- hattan is still as astonishing as ever.

But once one has admired the profile, is there much left to admire? Is, possibly, this astonishing exterior appearance all there is in Manhattan? Some years ago, walking down Fifth Avenue with a female friend of long standing and admiring the elegant, long-legged young women striding past, I was rebuked with the chilling Bostonian judgment, 'You know

Lord Gladwyn's review of 'European Unifi- cation in the 'Sixties' by Miriam Camps has been held over until next week.

as we'll 'as I do there is nothing behind that facade, nothing in the girls, nothing in the city.' This is an exaggerated judgment, but is not a judgment with which I totally disagree. Some reasons for my semi-agreement are pro- vided by this book.

Again and again, the contributors of the various articles stress the uniqueness, the great- ness, the incomparability of Manhattan in a way that breeds resistance. It is not the biggest city in the world, and never has been. Magnificent as it is in many ways, there are many things it lacks. Even in some of the fields where its immense wealth should produce brilliant results, it does not do so.

For example, the restaurants of New York are overpraised. In my experience of the very expensive restaurants (1 may say as a guest), I have been struck by the way they break down in detail, especially by the difficulty of getting adequate service even in extremely expensive places. It could be the proud American spirit which is at work, but as most of the waiters, judging from their speech, are fairly recent immigrants, this can hardly be the explana- tion. I have also discovered that if you speak to the staff in French or Italian you get better service, because they realise that you are not American and will not put up with the bad service which is so common and of which, in a way, this guide seems to boast. Nevertheless, it is possible to eat very well in New York at considerable expense, and there are a surpris- ing number of good but not very expensive Italian and French restaurants. There are also, or so I learn from this book, restaurants where you can get genuine Southern cooking. But as I dislike genuine Southern cooking even more than bogus Southern cooking, this does lint cheer me up. And my philo-semitism does not extend to kosher food and this makes some of the other restaurants mentioned here not very attractive to me either.

On the other hand, New York hotels, new and old, are on the whole very good, and some of them not really, by the standards of New York, very expensive. I feel that the authors of the bitter complaints of the New York telephone service, and of the manners of tele- phone girls in offices, ought to try London, where they will find something really to com- plain about. I think the New York taxi-driver very inferior in intelligence and manners to the Washington taxi-driver, but he is not, in my experience, as surly as he is represented to be here. He is, however, often startlingly ignorant. I once took a cab at Grand Central Station to go to Madison Avenue, which is like taking a cab at Liverpool Street Station to get to St Paul's, and was told by the driver he didn't know the way—he came from Brooklyn. However, I am delighted to see that, since this book was written, two thousand New York policemen have been allowed to 'moon- light,' that is to say, drive cabs at night after their police duties are over, and to carry their guns with them.

But all this side of the guide is, I think, extremely well done, and done with a candid indifference to the feelings of institutions and people criticised that, in England, would be thought extremely badmannered and might result in a few libel actions.

Institutions and men are both criticised. For example, both Lincoln Center and Mr Leonard Bernstein get a going-over and I prefer to ex- press no opinion on the justice of their rough treatment. Other articles have their own eccen- tric charm. The article on New York architec- ture is a violent blast against the new Le Corbusier-Skidmore school of glass slabs. It is a paean to the greatest triumphs of the beaux arts style and that is a novelty. (I am surprised the author did not mention the astonishing art nouveau façade of the New York Yacht Club.) Classical architecture is rather neglected, but the merits of Trinity Church are exaggerated. It is rather a dull effort of early Gothic Revival, looking very odd from the end of Wall Street. But it has its place in New York history. During the Civil War that learned high churchman and lawyer, George Templeton Strong, saw a young Union soldier admiring Trinity Church and told him that when he had seen real Gothic in Europe he would pay no attention to this drab imitation. Strong was properly answered: 'Where I come from there is no building older than myself.' So Trinity has its place as a building, on the New York scale, old as Notre-Dame de Paris, and older than Westminster Abbey in its present form.

But monuments disappear. The Astor Hotel, famous in song and story—'what things have I seen done at the Astor!,' as Keats nearly wrote—is disappearing or has disappeared. For it is one of the odd experiences of a very frequent visitor to New York like myself that one forgets so soon what was there a few months before. I have lived in the Astor fre- quently; it was one of the first New York hotels I ever visited; but I cannot remember whether it has been pulled down or not, although I was certainly in Times Square in April. Anything more than ten years old in New York is aere perennius, so that I can regret the disappearance of Penn Station, which I didn't like very much, and the defilement of Grand Central (which I liked a great deal) by the Pan-American building put on top of it by ingenious London real-estate speculators.

Some articles in this guide are extremely badly done, like the article by some young woman on men's clubs from which she is naturally excluded. There is one last aspect of this book that does recall the original London Spy, Ned Ward. Indeed, some of it might even shock Ned Ward, for there is here information about prostitution, white and black, homosexual and heterosexual, and other fun and games which might draw the attention of the police, even in swinging London. We are assured, how- ever, that the old-fashioned 'house,' celebrated by Miss Polly Adler in her famous book A House is not a Home, has virtually disappeared. One is glad to hear this. New York is suffering badly just now from a rage for 'fractured French,' as this guide painfully shows, and a rumour has been going round that the houses have not disappeared, but are now called boutiques de frappe. Well, if the story is not true, it was ben trovato.