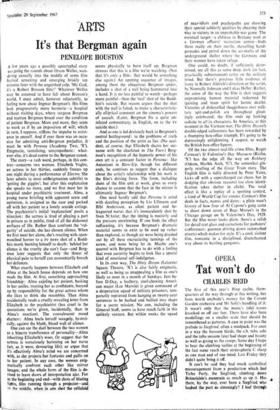 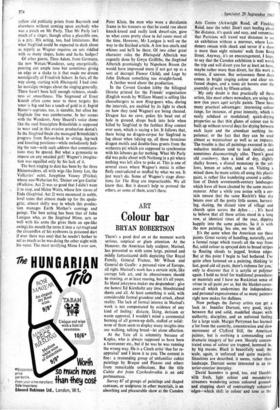 The first of this year's Ring cycles, three- quarters of the way through at this writing, has been worth anybody's money for the Covent Garden orchestra and Mr Solti's handling of it. It wasn't only that the music's tidal waves knocked us off our feet. There have also been modellings on a smaller scale that should be remembered as patterns. A case in point was the prelude to Siegfried, often a mudpack. For once in a way the bassoon thirds, the c.b. tuba solo and the tuba unisons later had shape and beauty as well as giving us the creeps. Some day I hope to hear the climbing violins at the beginning of the last scene reach their stratospheric C sharp as one man and of one mind. Last Friday they didn't quite bring it off.

It can't be said they had much symbolical encouragement from a production which had Ticho Parly, the Siegfried, climbing down Biiinnhilde's mountain as much as up it. Has there, by the way, ever been a Siegfried who looked the part. so stunningly? I leaf .thr0t14111 yellow old publicity prints from Bayreuth and elsewhere without coming upon anybody who was a patch on Mr Parly. That Mr Parly isn't much of a singer, though often a plausible one, is a pity. His acting, too, had limitations. But what Siegfried could be expected to dash about as nippily as Wagner requires on sets riddled with so many slopes, holes and ha-ha hedges?

Of other guests, Theo Adam, from Germany, the new Wotan/Wanderer, sang energetically, pouring out ample tone but sometimes giving an edge or a shake to it that made me dream nostalgically of Friedrich Schorr. In fact, all the way along. starting with Rheingold, I had simi- lar nostalgic twinges about the singing generally. There hasn't been half enough richness, steadi- ness or smoothness. The Siegmund of Ernst Kozub often came near to these targets; his tenor is big and has a touch of gold in it. Ingrid Bjoner's soprano, too, is sizeable, but often her Sieglinde line was cumbersome. In her scenes with the Wanderer, Amy Shuard's voice shone like the steel breastplate Brunnhilde is supposed to wear and in this evasive production doesn't. In the Siegfried finale she managed Briinnhilde's progress from flat-on-back to sitting, leg-tuck and kneeling positions—while melodiously hail- ing the sun—with such address that commisera- tions may be spared. But what a gymnastic to impose on any unaided girl! Wagner's imagina- tion was equalled only by his lack of it.

The best singing to date has been by the three Rhinemaidens, all with wigs like Jenny Lee, the Valkyries' octet, Josephine Veasey (Fricka), whose neo-Weberian bit, 'Deiner ew'gen Gattin' (Walkiire, Act 2) was so good that I didn't want it to stop, and Helen Watts, whose few staves of Erda (Siegfried, Act 2) were enounced in noble, level tones that almost made up for the apolo- getic, almost shifty way in which this produc- tion manages Earth Mother's comings and goings. The best acting has been that of John Lanigan who, as the Siegfried Mime, acts so well with his arms (he gives them an ape-like swing), his mouth (he turns it into a rat-trap) and the circumflex of his eyebrows (a poisoned dart if ever there was one) that he needn't bother to act as much as he was doing the other night with his voice. The most terrifying Mime I ever saw, Peter Klein, the man who wore a duralumin frame in his trousers so that he could run about knock-kneed and really look dwarf-size, gave us what came pretty close to bel canto most of the time. However, Mr Lanigan is well on the way to the finished article. A few less snarls and whines and he'll be there. Of two other great character roles the Rheingold Alberich was cogently done by Gwyn Griffiths, the Siegfried Alberich promisingly by Napoleon Bisson (he would have impressed more if not got up as a sort of decrepit Flower Child), and Loge by John Dobson something too straight-faced.

A further word about the production.

In the Covent Garden lobby the bilingual libretto printed for the Friends' organisation (English words by William Mann) is selling like cheeseburgers to new Ring-goers who, during the intervals, are enabled by its light to check on how they (and Wagner) are being cheated. Dragon has no cave, pokes his head out of hole in ground, drops back into hole when killed by Siegfried in the feeblest Ring contest ever seen, which is saying a lot. It follows that, there being no dragon-corpse for Siegfried to lug about when tidying up, all those ferocious dragon motifs and double-bass grunts from the orchestra pit which are supposed to synchronise with his labours go for nothing. What Mr Parly did was poke about with Nothung in a pit where nothing was left alive to poke at. This is one of several cases where Wagner's music is either flatly contradicted or muffed by what we see. It just won't do. Some of Wagner's stage direc- tions for The Ring are impracticable. We all know that. But it doesn't help to pretend the others, or some of them, aren't there.