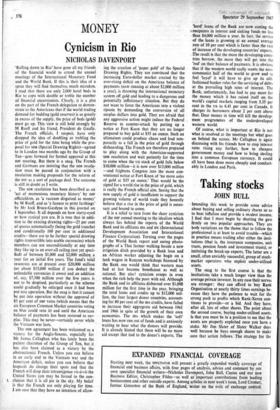 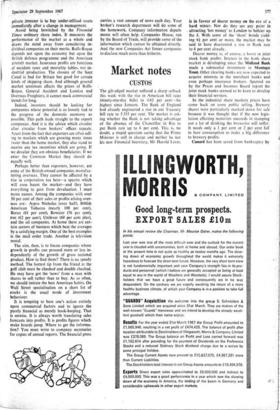 Intending this week to provide some advice about buying and selling ordinary shares so as to beat inflafion and provide a modest income, I find that I must begin by shutting the gate firmly on two popular approaches. They are both variations on the theme that to follow the professional is at least to avoid trouble—which in practice means trailing after either the insti- tutions (that is, the insurance companies, unit trusts, pension funds and investment trusts), or imitating the break-up experts. The latter are a small, often enviably successful, group of stock- market operators who exploit under-utilised assets.

The snag to the first course is that the institutions take a much longer view than the average private investor. In any case their nerves are stronger: they can afford to buy Rank Organisation at nearly thirty times earnings be- cause they have the patience to wait for the strong push to profits which Rank-Xerox con- tinues to provide—or a bid. And they have, after all, lots of other shares. The point about the second course, buying under-utilised assets, is that you must be in a position to see that the assets are properly exploited once you have a stake. Mr Jim Slater of Slater Walker does well because he buys enough shares to make sure that action follows. The strategy for the

private investor is to buy under-utilised assets immediately after a change in management.

Avoid being bewitched by the Financial Times ordinary share index. It measures the

performance of the market as a whole and draws the mind away from considering in- dividual companies on their merits. Rolls-Royce

depends not upon the economy but upon the British defence programme and the American aircraft market. Insurance profits are functions of accident rates and mortality tables, not in-

dustrial production. The closure of the Suez Canal is bad for Britain but good for certain kinds of shipping share. And although general market sentiment affects the prices of Rolls- Royce, General Accident and London and Overseas Freighters, it cannot mask commercial trends for long.

Indeed, investors should be looking for companies whose potential is as loosely tied to the progress of the domestic economy as possible. This path leads straight to the export companies. And it is the advice which circular after circular from brokers' offices repeats. Apart from the fact that exporters are often sell- ing to markets which are growing many times faster than the home market, they also stand to receive any tax incentives which are going. If we devalue they are obvious beneficiaries. If we enter the Common Market they should do equally well.

Perhaps better than exporters, however, are some of the British-owned companies manufac- turing overseas. They cannot be affected by a rise in corporation tax here—a spectre which will soon haunt the market—and they have everything to gain from devaluation. I must name names. Among the companies with over 50 per cent of their sales or profits arising over- seas are: Aspro Nicholas (over half), British American Tobacco (nearly 100 per cent), Borax (61 per cent), Bowater (76 per cent), EMI (62 per cent), Unilever (60 per cent plus), and the oil companies. At home there are cer- tain sectors of business which beat the averages by a satisfying margin. One of the best examples is the mail order trade. Another is television rental.

The aim, then, is to locate companies whose growth in profits can proceed more or less in- dependently of the growth of gross national product. How to find them? There is no speedy method. The hottest tip from the friend at the golf club must be checked and double checked. He may have got the 'news' from a man with shares to sell rather than to buy. As so often, we should imitate the best American habits. On Wall Street specialisation on a short list of stocks is the usual mode of investment behaviour.

It is tempting to base one's action entirely upon commercial factors and to ignore the purely financial as merely book-keeping. That is unwise. It is always worth translating sales forecasts into profits. It is profits figures which make boards jump. Where to get the informa- tion? You must write to company secretaries for copies of annual reports. The financial press

carries a vast amount of news each day. Your broker's research department will do some of the homework. Company information depart- ments will often help. Companies House, run by the Board of Trade, will provide some of the information which cannot be obtained directly. And the new Companies Act forces companies to disclose much more than hitherto.