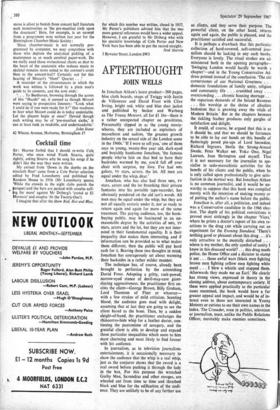 What on earth (or even in heaven!) are we to make of a writer who drools incomprehensibly about 'the pre-manifest sixth upon the dominant which circumscribes this phrase and reappears in manifest shape in Ex. 32 (b) ("R" meaning retro- grade version or chordal inversion) where it intro- duces the only note that is not part of the succes- sion of notes marked "a," "a-1," and "a-2," respec- tively'? The spirit of Mozart must stand appalled on Parnassus to think that his D minor Quartti. (K421) could provoke such gnomic drivel. It may comfort Mr McLachlan to learn that a

move is afoot to banish from concert hall literature such monstrosities as 'the pre-manifest sixth upon the dominant.' Here, for example, is an excerpt from a programme note written last year for the Birmingham Chamber-Music Society: 'Since chamber-music is not normally pro- grammed by computer, we may sympathise with those who deplore the analytical pickling of a masterpiece as so much cerebral paper-work. Do we really need those vivisectional charts so dear to the heart of the anatomist who reduces music to skeletal remains more suited to the coroner's court than to the concert-hall? Certainly not for this hearing of Mozart's "Hunt" Quartet . .

A reminder of the circumstances in which the work was written is followed by a plain man's guide to its contents, and the note ends:

. To Beethoven, browsing through the scores of this "Haydn" set, it seemed as though Mozart were saying to prospective listeners: "Look what I could do if you were ready for it!" Our readiness to hear what Mozart could do is today undeniable. Let the players begin at once!' Devoid though' such writing may be of 'pre-manifest sixths,' it can at least rank as readable, and understandable.' .John Stone 42 Wheats Avenue, Harborne, Birmingham 17