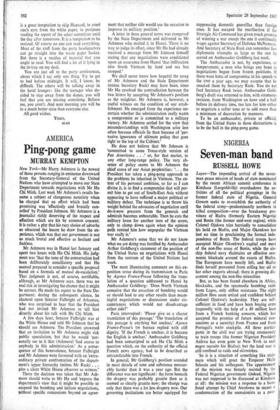 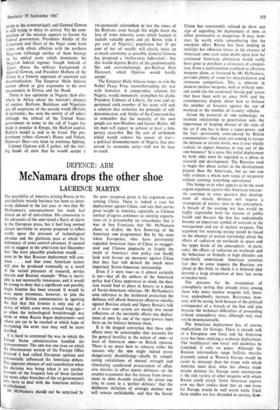 Lagos—The impending arrival of the seven- man peace mission of heads of state nominated by the recent African summit conference in Kinshasa (Leopoldville) overshadows the ac- tivities of all the political groupings in the former federal state of Nigeria. General Gowon seeks to re-establish the authority of the federal army—predominantly northern in tribal composition—over the breakaway pro- vinces of Biafra (formerly Eastern Nigeria) and Benin (the former mid-west region), while Colonel Ojukwu tries hurriedly to consolidate his hold on Biafra, and Major Okonkwo has lost no time in proclaiming the formal inde- pendence of Benin. The federal troops have occupied Major Okonkwo's capital and most of the non-Ibo areas of Benin, while the six- ship federal navy maintains an effective eco- nomic blockade around the coasts of Biafra. The Europeans have mostly left, and Biafra finds herself prevented from selling her oil or her other exports abroad; there is growing dis- content among the non-Ibo minorities.

But, as has been found elsewhere in Africa, blockades, and the spasmodic bombing raids from Lagos, only stiffen resistance. The eight million Ibos seem united and confident behind Colonel Ojukwu's leadership. They are self- sufficient in food and have been buying arms (reputedly with the help of a £6 million loan from a French banking concern, which has accepted the promise of future mineral con- cessions as a security) from France and from Portugal's NATO stockpile. All three partici- pants in the civil war are trying strenuously- to train troops (the former Nigerian President Azikwe has even gone to New York to seek negro recruits for Biafra); but the land war is still confined to raids and skirmishes.

' So it is a situation of something like stale- mate which will greet the Emperor Haile Selassie and his colleagues. The appointment of the mission was fiercely resisted by the Federal Nigerian government (indeed, Nigeria was not supposed to be discussed at Kinshasa at all: the mission was a response to a ham- fisted attempt by Chief Awolowo to secure a condemnation 9f the secessionists as a post-

script to the communiqué), and General Gowon is still trying to delay its arrival. Yet the com- position of the mission appears to favour the federal government. Presidents Ahidjo of the Cameroon and Diori of the Niger come from tribes with ethnic affinities with the northern Nigerians (although neither of them belongs to the emiral caste which dominates the Nigerian federal regime). Joseph Ankrah of Ghana shares the military background of General Gowon, and President Mobutu of the Congo is a frenetic opponent of secession and decentralisation. The Emperor Haile Selassie cannot afford to give arguments to his own secessionists in Eritrea and the Haud.

There is less optimism in Nigeria than else- where in Africa about the mission's chances of success. Biafrans, Beninians and Nigerians are all suspicious of the outside world (Britain, in particular, has won the enmity of all sides); although the refusal of the United States government to come to the aid of Lagos has made it popular in Enugu, the Biafran capital, Biafra's model is said to be Israel. The pre- dominant tribes—Gowon's Hausa and Fulani, Ojukwu's Ibos—are keen to continue fighting. Colonel Ojukwu will, I gather, tell the visit- ing heads of state that he would accept a UN-sponsored referendum to test the views of his Biafrans, even though this might mean the loss of some minority areas which happen to include valuable ports and oil. Benin, with 4 per cent of Nigeria's population but 35 per Cent of her oil wealth, will clearly insist on as much autonomy as possible. General Gowon has proposed a 'twelve-state federation': but this would deprive Biafra of the predominantly Ibo and overwhelmingly pro-Biafran Port Harcourt, which Ojukwu would hardly accept.

The Emperor Haile Selassie hopes to win the Nobel Peace Prize (notwithstanding his war with Somalia). A compromise solution for Nigeria would immensely strengthen his claim. President Tubman of Liberia, the wise and ex- perienced sixth member of his team, will seek a solution that enshrines the principle of self- determination, and Ahidjo of the Cameroon has to remember that the majority of his own people are non-Muslims and favour Biafra. All six men will expect to achieve at least a tem- porary cease-fire. But the sort of settlement which would remove the causes of war— a political dismemberment of Nigeria that pre- served its economic unity—will not be easy to reach.