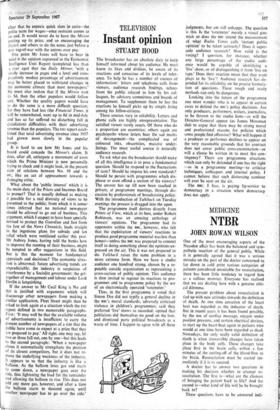 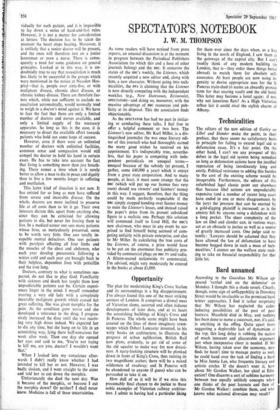 One of the most encouraging aspects of the Neasden affair has been the balanced and sym- pathetic reaction of the general public. While it is generally agreed that it was a serious mistake on the part of the doctor concerned to lay down in cold print various categories of patients considered unsuitable for resuscitation, there has been little tendency to regard him as a callous monster. Everyone has realised that we are dealing here with a genuine ethi- cal dilemma.

The present problem about resuscitation is tied up with new attitudes towards the definition of death. At one time cessation of the heart beat was regarded as the indicator of death. But in recent years it has been found possible, by the use of cardiac massage, oxygen under positive pressure, and certain electrical devices, to start up the heart-beat again in patients who would at one time have been regarded as dead. Nowadays, the only really valid definition of death is when irreversible changes have taken place in the body cells. These changes take place first in the brain cells,. within a few minutes of the cutting-off of the blood-flow to the brain. Resuscitation must be started im- mediately if it is to succeed.

A doctor has to answer two questions in making his decision whether to attempt re- suscitation. The first is—what are the chances of bringing the patient back' to life? And the second is—what kind of life will he be brought back to?

These questions have to be answered indi-

vidually for each patient, and it is impossible to lay down a series of hard-and-fast rules. However, it is not a matter for consideration at leisure. The decision has to be taken the moment the heart stops beating. Moreover, it is unlikely that a senior doctor will be present, and the onus will therefore rest on a junior houseman or even a nurse. There is conse- quently a need for some guidance on general principles. Looked at in this way, it is un- doubtedly true to say that resuscitation is much less likely to be successful in the groups which were mentioned in the notice at Neasden Hos- pital—that is, people over sixty-five, or with malignant disease, chronic chest disease, or chronic kidney disease. There are therefote fac, tors which, while not sufficient to exclude re- suscitation automatically, would normally tend to weigh in a doctor's mind against it. We have to face the fact that there are only a limited number of doctors and nurses available, and only a limited supply of the necessary apparatus. So long as this is the case, it is necessary to direct the available effort towards patients who hold out some hope of success.

However, even if there were an unlimited number of doctors with unlimited facilities, common sense and compassion would still compel the doctor to hold his hand in certain cases. He has to take into account the fact that living is something more than just breath- ing. There comes a time when it is surely better to allow a man to die in peace and dignity than to live a few months longer in suffering and mutilation.

This latter kind of situation is not new. It has existed for so long as men have suffered from severe and incurable disease. On the whole, doctors are more inclined to preserve life at all costs than to let it go. Their own interests dictate this, apart from anything else, since they can be criticised for allowing patients to die, but never for forcing them to live. In a medical career one sees many patients whose lives, so meticulously preserved, seem to be worth very little. One sees totally in- capable mental defectives. One sees patients with paralysis affecting all four limbs and the muscles of the chest and abdomen, who each year develop pneumonia following a winter cold and each year are brought back to their helpless, dependent lives with penicillin and the iron lung.

Doctors, contrary to what is sometimes sus- pected, do not like to play God. Familiarity with sickness and death has taught them how unpredictable patients can be. Certain experi- ences linger in the mind. I myself remember treating a very old lady with a completely incurable malignant growth which caused her great suffering. She was given morphia for the pain. As the condition grew worse and she developed a tolerance to the drug, I progres- sively increased the dose until she was receiv- ing very high doses indeed. We expected her to die any time, but she hung on to life in an astonishing way, lying there half-conscious for week after week. Then one day she opened her eyes and said to me, 'You're not trying to kill me, are you, doctor? I wouldn't want that.'

When I looked into my conscience after- wards I didn't really know whether I had• intended to kill her or not. However, I was badly shaken, and I went straight to the sister and told her to cut down the morphia.

Unfortunately she died the next day. Was it because of the morphia, or because I cut the morphia down? Or neither? I shall never know. Medicine is full of these uncertainties.