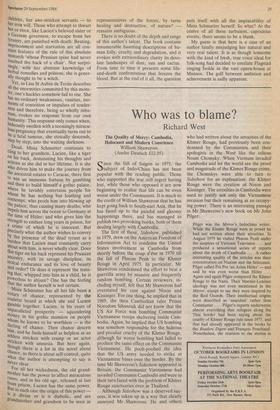 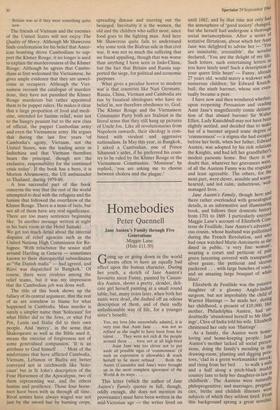 Who was to blame?

Since the fall of Saigon in 1975, the Osubject of Indo-China has not been popular with the reading public. Those who supported the war still regret having lost, while those who opposed it are now beginning to realise that life can be even worse under the Communists. It is much to the credit of William Shawcross that he has kept going back to South-east Asia, that he has faced up to the painful and gloomy happenings there, and has managed to publish two provoking books, both of them

The first of these, Sideshow, published in 1979, drew on the American Freedom of Information Act to condemn the United States involvement in Cambodia from shortly before the coup d'etat in 19711 till the fall of Phnom Penh to the Khmer Rouge in April 1975. In particular, Mr Shawcross condemned the effort to beat a guerrilla army by massive and frequently random bombing. Certain reviewers, in- cluding myself, felt that Mr Shawcross had 'overstated his case against Nixon and Kissinger. For one thing, he implied that in 1969, the then Cambodian ruler Prince Norodom Sihanouk did not know that the US Air Force was bombing Communist Vietnamese troops sheltering inside Cam- bodia. Again, he implied that US bombing was somehow responsible for the hideous and peculiar cruelty of the Khmer Rouge, although far worse bombing had failed to produce the same effect on the Communist Vietnamese. He pooh-poohed the idea that the US army needed to strike at Vietnamese bases over the border. By the time Mr Shawcross's Sideshow appeared in Britain, the Communist Vietnamese had invaded Communist Cambodia and were in their turn faced with the problem of Khmer Rouge sanctuaries over in Thailand.

Although Sideshow was a deserved suc- cess, it was taken up in a way that clearly annoyed Mr Shawcross. He and others who had written about the atrocities of the Khmer Rouge, had previously been con- demned by the Communists and their apologists in the West like the odious Noam Chomsky. When Vietnam invaded Cambodia and let the world see the proof and magnitude of the Khmer Rouge crime, the Chomskys were able to turn to Sideshow for an explanation: the Khmer Rouge were the creation of Nixon and Kissinger. The atrocities in Cambodia were used to justify not only the Vietnamese invasion but their remaining as an occupy- ing power. There is an interesting passage in Mr Shawcross's new book on Mr John Pilger: Pilger was the Mirror's Indochina writer. While the Khmer Rouge were in power he had not written about their atrocities. In August 1979 he visited Phnom Penh under the auspices of Vietnam Television . . . and produced a sensational series of reports about the death of Cambodia . . . A rather interesting quality of the articles was their concentration on Nazism and the holocaust. Pilger called Pol Pot 'an Asian Hitler' — and said he was even worse than Hitler . . . Again and again Pilger compared the Khmer Rouge to the Nazis. Their Marxist-Leninist ideology was not even mentioned in the Mirror, except to say they were inspired by the Red Guards. Their intellectual origins were described as 'anarchist' rather than Communist . . Pilger's reports underwrote almost everything that refugees along the Thai border had been saying about the cruelty of Khmer Rouge rule since 1975, and that had already appeared in the books by the Readers Digest and Francois Ponchaud. Nonetheless, the reaction to the stories in Britain was as if they were something quite new.

The friends of Vietnam and the enemies of the United States will not enjoy The Quality of Mercy. Although Mr Shawcross finds confirmation for his belief that Amer- ican bombing drove Cambodians to sup- port the Khmer Rouge, it no longer is used to explain the murderousness of the Khmer Rouge. Although he agrees that Cambo- dians at first welcomed the Vietnamese, he gives ample evidence that they are unwel- come as occupiers. Although the Viet- namese recount the catalogue of murders done, they have not punished the Khmer Rouge murderers but rather appointed them to be puppet rulers. He makes it clear that a large proportion of food and medi- cine, intended for famine relief, went not to the hungry peasant but to the new class of official, the puppet Cambodian army and even the Vietnamese army. He argues that during the last five years 'of Cambodia's agony, Vietnam, not the United States, was the leading actor in Indochina and that Vietnam therefore bears the principal, though not the exclusive, responsibility for the continued crisis today'. If the book has a hero, it is Morton Abramowitz, the US ambassador to Thailand, during 1979-80.

A less successful part of this book concerns the way that the rest of the world attempted to deal with the refugees and the famine that followed the overthrow of the Khmer Rouge. There is a mass of facts, but not all of them have any real significance. There are too many sentences beginning like: 'In another message written at night in his bare room at the Hotel Samaki . . We get too much detail about the internal disputes of relief agencies such as the United Nations High Commission for Re- fugees: 'With reluctance the senior staff around Hartling in Geneva — sometimes known to their disrespectful subordinates as "the Danish mafia" — had agreed, and Rizvi was dispatched to Bangkok.' Of course, there were rivalries among the relief teams, but it was my impression that the Cambodian job was done well.

The title of this book shows up the fallacy of its central argument, that the rest of us are somehow to blame for what happened in Cambodia. Mass murder is surely a simpler name than 'holocaust' for what Hitler did to the Jews, or what Pol Pot, Lenin and Stalin did to their own people. And 'mercy', in the sense that Shakespeare as well as the Bible used it, means the exercise of forgiveness not of some generalised compassion. 'It is an attribute to God himself . . .' Most of the misfortunes that have afflicted Cambodia, Vietnam, Lebanon or Biafra are better conveyed not in catchwords like 'holo- caust' but in St John's description of the Four Horsemen of the Apocalypse, two of them representing war, and the others famine and pestilence. Those four horse- men have been with us through all time. Rival armies have always waged war not just by the sword but by burning crops, spreading disease and starving out the besieged. Inevitably it is the women, the old and the children who suffer most, since food goes to the fighting man. And here Mr Shawcross quite fails to understand why some took the Biafran side in that civil war. It was not so much the suffering that we found appalling, though that was worse than anything I have seen in Indo-China, but the fact that Britain and Russia sup- ported the siege, for political and economic purposes.

What gives a peculiar horror to modern war is that countries like Nazi Germany, Russia, China, Vietnam and Cambodia are run by fanatical ideologues who have no belief in, nor therefore obedience to, God. The Khmer Rouge and the Vietnamese Communist Party both are Stalinist in the literal sense that they still hang up pictures of Uncle Joe. Like all revolutionaries from Napoleon onwards, their ideology is com- bined with virulent and aggressive nationalism. In May this year, in Bangkok, I asked a Cambodian, one of Prince Sihanouk's aides, if he preferred his coun- try to be ruled by the Khmer Rouge or the Vietnamese Communists. 'Monsieur' he replied, 'you are asking me to choose between cholera and the plague.'