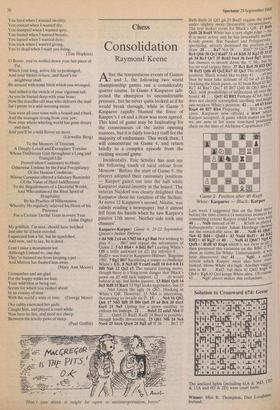 After the tempestuous events of Games 2 and 3, the following two world championship games ran a considerably quieter course. In Game 4 Kasparov sub- jected the champion to uncomfortable

pressure, but he never quite looked as if he would break through, while in Game 5 Kasparov rapidly blunted the force of Karpov's 1 e4 and a draw was soon agreed. This kind of game may be fascinating for the connoisseurs of the latest opening nuances, but it is fairly low-key stuff for the majority of enthusiasts. This week then, I will concentrate on Game 4, and return briefly to a complex episode from the exciting second game.

Incidentally, Eric Schiller has sent me the following touch of local colour from Moscow: 'Before the start of Game 5, the players adopted their customary positions — Karpov gazed out into the hall while Kasparov stared intently at the board. The veteran Najdorf was clearly delighted that

Kasparov chose his variation of the Sicilian. At move 12 Kasparov's second, Nikitin, was calmly reading a newspaper, but it almost

fell from his hands when he saw Karpov's passive 13th move. Neither side took any chances'.