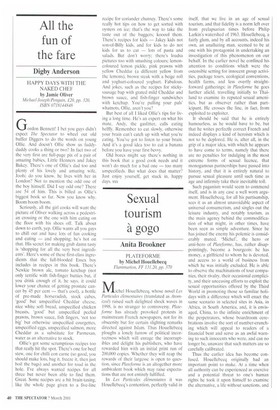 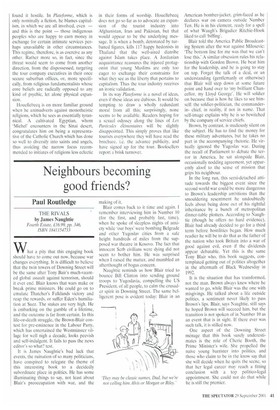 Michel Houellebecq, whose novel Les Parricides elementaires (translated as Atomized) raised such delighted shock waves in 1998, is no stranger to controversy. Plateforme has already provoked protests in mainstream French newspapers, not for its obscenity but for certain slighting remarks directed against Islam. Thus Houellebecq ploughs a lonely furrow of political incorrectness which will enrage the incorruptibles and delight his publishers, who have rewarded him with an initial print run of 200,000 copies. Whether they will reap the rewards of their largesse is open to question, since Platefonne is an altogether more ambivalent book which may raise expectations that are not entirely fulfilled.

In Les Particules dementaires it was Houellebecq's contention, perfectly valid in itself, that we live in an age of sexual tourism, and that fidelity is a norm left over from prelapsarian times before Philip Larkin's watershed of 1963. Houellebecq, a fairly glum, and by all accounts, indeed his own, an unalluring man, seemed to be at one with his protagonist in undertaking an investigation of this phenomenon on our behalf. In the earlier novel he confined his attention to conditions which were the ostensible setting for innocent group activities, package tours, ecological conventions, health farms, and less overtly straightforward gatherings; in Plareforme he goes further afield, travelling initially to Thailand to examine its reputed sexual amenities, but as observer rather than participant. He crosses the line, in fact, from exploited to exploiter.

It should be said that he is entirety humourless, as he would have to be, but that he writes perfectly correct French and indeed displays a kind of heroism which is not to be deplored. He is, after all, in the grip of a major idea, with which he appears to have come to terms, namely that there are no penalties for indulging in the most extreme forms of sexual licence, that monogamous partnerships have passed into history, and that it is entirely natural to pursue sexual pleasure until such time as age and infirmity take their inevitable toll.

Such paganism would seem to commend itself, and is in any case a well worn argument. Houellebecq, for all his partisanship, sees it as an almost unavoidable aspect of universal consumerism, and singles out the leisure industry, and notably tourism, as the main agency behind the commodification of what might, in other times, have been seen as simple adventure. Since he has joined the enemy his polemic is considerably muted. 'Michel', the hero or anti-hero of Plateforme, has, rather disappointingly, become a bourgeois: he has money, a girlfriend to whom he is devoted, and access to a world of business from which he was initially excluded. He is able to observe the machinations of tour companies, their rivalry, their occasional complicity, and their unceasing efforts to exploit the sexual opportunities offered by the Third World in promoting those so familiar holidays with a difference which will enact the same scenario in selected sites in Asia, in Africa, in South America, and, it is envisaged, China, to the infinite enrichment of the perpetrators, whose boardroom cerebrations involve the sort of number-crunching which will appeal to readers of a financial bent and serve as an awful warning to such innocents who were, and can no longer be, unaware that such matters are so carefully calibrated.

Thus the earlier idea has become confused. Houellebecq originally had an important point to make. At a time when all authority can be experienced as coercive and a potential threat to one's human rights he took it upon himself to examine the alternative, a life without sanctions, and found it hostile. In Plareforme, which is only nominally a fiction, he blames capitalism, in which we are all involved, even — and this is the point — those indigenous peoples who are happy to earn money in exchange for certain intimate services perhaps unavailable in other circumstances. This regime, therefore, is as coercive as any other. Rather more so, in fact, since the threat would seem to come from another direction, from the dispossessed, targeting the tour company executives in their once secure suburban offices, or, more specifically, from religious fundamentalists whose core beliefs are radically opposed to any kind of psychic, let alone physical expansion.

Houellebecq is on more familiar ground when he animadverts against monotheistic religions, which he sees as essentially tyrannical. A cultivated Egyptian, whom 'Michel' encounters in the Sinai desert, congratulates him on being a representative of the Catholic Church which has done so well to diversify into saints and angels, thus avoiding the narrow focus recommended to initiates of religions less eclectic in their forms of worship. Houellebecq does not go so far as to advocate an expansion of the tourist industry into Afghanistan, Iran and Pakistan, but that would appear to be the underlying message. It is when a bomb, detonated by turbaned figures, kills 117 happy hedonists in Thailand that the well-aired diatribe against Islam takes place. A Jordanian acquaintance reassures the injured protagonist that young Muslims are only too eager to exchange their constraints for what they see as the liberty that pertains to capitalism. Thus the tour industry receives an ironic validation.

In its way Plateforme is a novel of ideas, even if these ideas are dubious. It would be tempting to draw a wholly redundant moral from all this; surprisingly, none seems to be available. Readers hoping for a sexual odyssey along the lines of Les Parricides elementaires will be slightly disappointed. This simply proves that like tourists everwhere they will have read the brochure, i.e. the advance publicity, and have signed up for the tour. Booksellers report a brisk turnover.