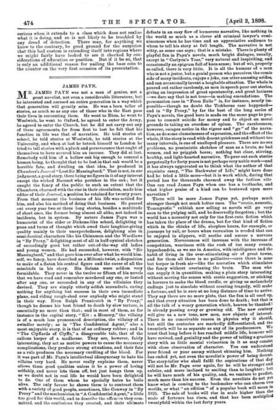 MR. JAMES PAYN was not a man of genius, not a great novelist, not even a considerable litteratenr, but he interested and amused an entire generation in a way which that generation will greatly miss. He was a born teller of stories, as much so as any one of those who in the East pass their lives in recounting them. He went to Eton, he went to Woolwich, he went to Oxford, he agreed to enter the Army, he agreed to enter the Church, but he did not carry out any of these agreements, for from first to last he felt that his function in life was that of narration. He told stories at school, he told stories at Woolwich, he told stories at the University, and when at last he betook himself to London he tried to tell stories with a pluck and perseverance that ought of themselves to have secured him an income. They did at last. Somebody told him of a hollow oak big enough to conceal a human being, be thought that to be lost in that oak would be a horrible fate, and dwelling on that idea, he produced in Chambers's Journal "Lost Sir Massingberd." That is not, in our judgment, a good story, there being no figure in it of any interest except the wicked Baronet who perishes in the oak ; but it caught the fancy of the public to such an extent that the Chambers, charmed with the rise in their circulation, made him editor of their Journal, a position he retained for twenty years. From that moment the business of his life was settled for him, and also his method of doing that business. He poured out every year two or three long stories, besides a multitude of short ones, the former being almost all alike, not indeed in incidents, but in system. By nature James Payn was a hnmourist of the older or Dickens-like school, delighting in puns and tarns of thought which owed their laughter-giving quality mainly to their unexpectedness, delighting also in semi-farcical characters like his Chinamen and the Wardlaws in "By Proxy," delighting most of all in half-cynical sketches of exceedingly good but rather oat-of-the-way old ladies and young women. He had succeeded, however, with "Sir Massingberd," and that gave him ever after what he would him. self, we fancy, have described as a Miltonic twist, a disposition to make of a Satan his central figure and the cause of all the mischiefs in his story. His &tans were seldom very formidable. They never in the twelve or fifteen of his novels that we have read and remember murdered any one, or lusted after any one, or succeeded in any of the villainies they devised. They are simply utterly selfish scoundrels, caring nothing for anything but success in their own immediate plans, and riding rough-shod over anybody who might stand in their way. Even Ralph Pennicuick in "By Proxy," though he dooms his best friend to death by slow torture, is essentially no more than that; and in most of them, as for instance in the capital story, "Kit : a Memory," the villainy is of a much leas pronounced description, the villainy of a swindler merely ; as in "The Confidential Agent," also a most enjoyable story, it is that of an ordinary robber ; and in " The Clyffards of Clyffe," a disagreeable tale, that of the callous keeper of a madhouse. They are, however, fairly interesting, they act as motive powers to cause the necessary complications, they produce strong situations, and their fate as a rule produces the necessary curdling of the blood. For it was part of Mr. Payn's intellectual idiosyncrasy to hate his villains very hard. He never really explains them, never allows them good qualities unless it be a power of loving selfishly, and never lets them off, but just hangs them up, as we doubt not in real life he would have been delighted to. do. One of them whom he specially hates he boils alive. The only favour he shows them is to contrast them with a variety of good people, sometimes, like Conway in "By Proxy "and the mechanician in "A Confidential Agent," a little t oo good for this world, and to describe the offences they com- mitted, and the confusions they created, and their ultimate

defeats in an easy flow of humorous narrative, like nothing in the world so mach as a clever eld criminal lawyer's remi- niscences when he has time and an appreciative audience to whom to tell his story at full length. The narrative is not witty, as some one says ; that is a mistake. There is plenty of playful fun in Payn's novels, much bright dialogue, usually, except in "Canyon's Year," very natural and inspiriting, and occasionally an epigram full of keen sense; but of wit, properly so called, there is very little. It is all the humour of a man who is not a jester, but a genial person who perceives the comic side of many incidents, enjoys a joke, can utter amusing asides, and can occasionally invent a laughable situation. The whole is poured out rather carelessly, as men in speech pour out stories, giving an impression of great spontaneity, and great laziness —we dare say that is not true—in making emendations. The

personation case in "From Exile" is, for instance, nearly im- possible—though no doubt the Tiohborne case happened—

and in "By Proxy," by far the best of the long series of Payn's novels, the good hero is made on the same page to pro- pose to commit suicide for money and to object on moral grounds to taking an overdose of opium. The carelessness, however, escapes notice in the vigour and " go " of the narra- tion, as do some clumsinesses of expression, and the effect of the whole, if the story is read with decent quickness and without too many intervals, is one of unalloyed pleasure. There are no sex problems, no pessimistic sketches of man as a brute, no bad women, and no priggish bores ; nothing but clear, stirring, healthy, and light-hearted narrative. To pour out such stories perpetually for forty years is not perhaps very noble work—and it has always aggravated us to think what the author of that exquisite essay, "The Backwater of Life," might have done had he tried a little more—bat it is work which, during that period has for thousands charmed away the txdium vitx One can read James Payn when one has a toothache, and what higher praise of a kind can be bestowed upon mere narration?

There will be more James Paris yet, perhaps mach stronger though not mach better ones. The "erotic, neurotic, Tommyrotic " rubbish now selling as novels will go very soon to the pulping mill, and be deservedly forgotten ; but the world has a necessity not only for the first-rate fiction which has taken the place of the drama, but for that kind of fiction which in the chinks of life, sleepless hours, for example, or journeys by rail, or hours when recreation is needed that can be enjoyed in slippers, will soothe and amuse a nervous generation. Nervousness will increase with the increase of competition, weariness with the rash of too many events, hypochondria, as we see in America, with intelligence and the habit of living in the over-stimulating air of great towns, and for them all there is no palliative—cure there is none but torpor in fresh air—like the narrative which stimulates the fancy without overtaxing the brain. The man who can supply it in quantities, making a plain story interesting without moving the senses with erotic suggestion, or sticking in horrors to make the blood curdle, or giving us melancholy endings just to simulate without creating tragedy, will make a fortune, and he is sure at no long distance of time to arrive.

They say there are no more plots, that the fun is all used up, and that every situation has been done to death ; but that is all the talk of a weary generation which, heaven be thanked !

is already passing away or growing old. The new century will give us a new tone, new men, new objects of interest. There is no conceivable reason in physics why it should, but still the centuries are markedly differentiated, and the twentieth will be as separate as any of its predecessors. We trust that long before it has reached middle life, humour will have revived, and geniality and the power of telling a gracious story with as little mental vivisection in it as may consist with close observation of character. You can understand your friend or your enemy without skinning him. Nothing has ended yet, not even the novelist's power of being decent. The story-teller who shall fulfil the aspirations of that day will not be Mr. Payn over again, for he will be stronger and subtler, and more inclined to smiling than to laughter; but he will have much of his quality, and, we venture to predict, much more than his success. Even the novelists do not yet know what is coming to the bookmaker who can charm two worlds, or what "an edition" of a popular book will mean in 1925. The sale of books will rise in scale higher than the scale of fortunes has risen, and that has been multiplied twentyfold within the last forty years.