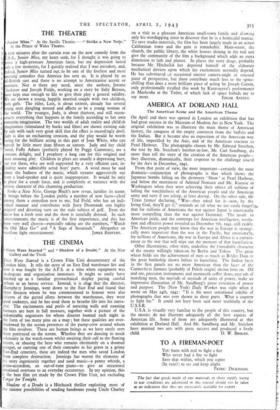 Fires Were Started " and " Shadow of a Doubt." At the New Gallery and the Tivoli.

Tres Were Started is a Crown Film Unit documentary of the London blitz. It tells the story of an East End warehouse fire and how it was fought by the A.F.S. at a time when equipment was inadequate and organisation immature. It might so easily have finished up as a familiar pyrotechnical display paying careful tribute to an heroic service. Instead, it is clew that the director, Humphrey Jennings, went down to the East End and found that these firemen whom he was commissioned 'to honour were also citizens of the gutted alleys between the warehouses, they were good cockneys, and he has used them to breathe life into his narra- tive. The excitements and perils of tottering walls and yawning furnaces are here in full measure, together with a picture of the indomitable organisers for whom disaster loomed each night in the form of too many pins on a snap; these qualities are over- shadowed by the screen presences of e pump-crew around whom the film revolves. These are human beings as we have rarely seen them portrayed on the screen. Whether they are dancing in mock solemnity in the watch-room whilst awaiting their call to the flaming streets, or abusing the hero who remains obstinately on a doomed parapet, or carrying one of their comrades to his grave in a grimy East-End cemetery, these are .indeed the men who saved London from complete destruction. Jennings has woven the elements of his story ingeniously together and used music—a penny whistle, a piano-accordion, an out-of-tune piano--to give an occasional ;motional overtone to an everyday occurrence. In my opinion, this s the best film yet made by the Crown Film Unit, not excluding Target for Tonight.

Shadow of a Doubt is a Hitchcock thriller exploiting most of the sinister possibilities of sending handsome young Uncle Charley on a visit to a pleasant American small-town family and allowing only his worshipping niece to discover that he is a homicidal maniac. To save studio materials, the film has been largely made in an actual Californian town and the gain is remarkable. Main-street, the church, the public library, the white houses shining in the real sun give the community of the film a background which adds an extra dimension to lath and plaster. In places the story drags, probably because Mr. Hitchcock has deprived himself of the elaborate mechanical devices upon which his excitements normally depend. He has substituted tat occasional sinister camera-angle or unusual piece of perspective, but these contribute much less to the spine- chilling than does a most brilliant piece of acting by Joseph Cotten, only professionally rivalled this week by Karavayeva's performance in Mashenka at the Taller, of which lack of space forbids me to