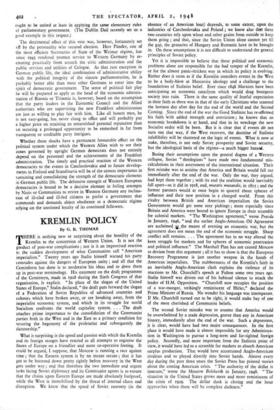 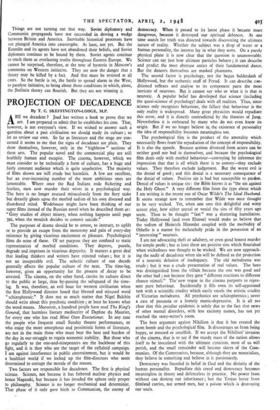 THERE is nothing new or surprising about the hostility of the Kremlin to the conception of Western Union. It is not the product of post-war complications ; nor is it an improvised reaction to the sudden development of what Communists call " American imperialism." Twenty years ago Stalin himself warned his party comrades against the dangers of European unity ; and all that the Cominform has done is to modernise his ideas and to dress them up in post-war terminology. His statement on the draft programme of the Comintern, made in x928 during the Sixth Congress of that organisation, is explicit. " In place of the slogan of the United States of Europe," Stalin declared, " the draft puts forward the slogan of a Federation of Soviet Republics of advanced countries and colonies which have broken away, or are breaking away, from the imperialist economic system, and which in its struggle for world Socialism confronts the world capitalist system. . . . The draft attaches prime importance to the consolidation of the Communist parties both in the West and in the East as a primary condition for securing the hegemony of the proletariat and subsequently the dictatorship."

What is surprising is the speed and passion with which the Kremlin and its foreign stooges have reacted to all attempts to organise the States of Europe on a friendlier and more co-operative footing. It could be argued, I suppose, that Moscow is running a race against time ; that the Eastern system is by no means secure ; that it has got to be battened down pretty tightly before recovery in the West gets under way ; and that therefore the two immediate and urgent tasks facing Soviet diplomacy and its Communist agents is to ensure that the chains upon Eastern Europe are made absolutely foolproof, while the West is immobilised by the threat of internal chaos and disruption. We know that the speed of Soviet recovery (in the absence of an American loan) depends, to some extent, upon the industries of Czechoslovakia and Poland ; we know also that these two countries rely upon wheat and other grains from outside to keep them going ; and that, since the Soviet Union alone cannot yet fill the gap, the granaries of Hungary and Rumania have to be brought in. On these assumptions it is not difficult to understand the general principles of Soviet policy.

Yet it is impossible to believe that these political and economic problems alone are responsible for the bad temper of the Kremlin, or for the almost panic-stricken way in which its policy is evolving. Rather does it seem as if the Kremlin considers events in the West to be a body-blow at Muscovite ideology and a challenge to the foundations of Stalinist belief. Ever since 1848 Marxists have been anticipating an economic cataclysm which would drag bourgeois society into ruin. There is the same quality of fearful expectation in their faith as there was in that of the early Christians who scanned the horizon day after day for the end of the world and the Second Coming. Since the end of the war the Good Stalinist has re-affirmed his faith with added strength and conviction ; he knows that an economic breakdown is at hand, and that in its wreckage the new Socialist order will be born. But it is clear that if events do not turn out that way, if the West recovers, the doctrine of Stalinist infallibility will be shattered on the logic of events. What is now at stake, therefore, is not only Soviet prosperity and Soviet security, but the ideological basis of the regime—a much bigger hazard.

Basing their assumptions upon the general dogma of a Western collapse, Soviet " theologians " have made two fundamental mis- calculations in their assessment of the international situation. Their first mistake was to assume that America and Britain would fall out immediately after the end of the war. Only the war, they argued, had kept them together ; with its end the coalition would inevitably fall apart—as it did in 1918, and, mutatis mutandis, in 1815 ; and the former partners would at once begin to quarrel about spheres of influence and their new position in a changed world. From this rivalry between British and American imperialism the Soviet Government would get some easy pickings ; more especially since Britain and America were bound to ignore Europe in their scramble for colonial markets. "The Washington agreement," wrote Pravda in January, 1946, " and the earlier Anglo-American Oil Agreement are acclaimed _futile means of averting an economic war, but the agreement does not mean the end of the economic struggle. Sharp conflict still remains. . . . The agreement has in no way altered the keen struggle for markets and for spheres of economic penetration and political influence." The Marshall Plan has not caused Moscow to deviate from this argument ; all it has to show is that the European Recovery Programme is just another weapon in the hands of American imperialists. The stubbornness of the Kremlin's faith in an inevitable Anglo-American clash explains the violence of its reactions to Mr. Churchill's speech at Fulton some two years ago. Stalin himself was driven out of his habitual silence to attack the leader of H.M. Opposition. "Churchill now occupies the position of a war-monger, strikingly reminiscent of Hitler," declared the Prime Minister of Russia. No wonder his language was intemperate. If Mr. Churchill turned out to be right, it would make hay of one of the most cherished of Communist beliefs.

The second Soviet mistake was to assume that America would be overwhelmed by a trade depression, graver than any in American history, immediately after the end of the war. Such a depression, it is clear, would have had two major consequences. In the first place it would have made it almost impossible for any Administra- tion in Washington to pursue a long-term and far-sighted foreign policy. Secondly, and more important from the Stalinist point of view, it would have led to a scramble for markets to absorb American surplus production. That would have accentuated Anglo-American rivalries and so played directly into Soviet hands. Almost every day during the past three years the Soviet Press has printed stories about the coming American crisis. " The authority of the dollar is insecure," wrote the Moscow Bolshevik in January, 1948. " The situation in the United States grows more and more reminiscent of the crisis of 1929. The dollar dusk is closing and the hour approaches when there will be complete darkness." Things are not turning out that way. Soviet diplomacy • and Communist propaganda have not succeeded in driving a wedge between Britain and America. Inevitable historical processes have not plunged America into catastrophe. At least, not yet. But the Kremlin and its agents have not abandoned their beliefs, and Soviet diplomats continue to be bound by them. Soviet agents continue to teach them as everlasting truths throughout Eastern Europe. We cannot be surprised, therefore, at the note of hysteria in Moscow's comments on Western initiative. They see now the danger that a theory may be killed by a fact. And that must be resisted at all costs. So the battle is on, the battle to spread alarm in the West, to paralyse initiative, to bring about those conditions in which, alone, the Stalinist theory can flourish. But they are not winning it.