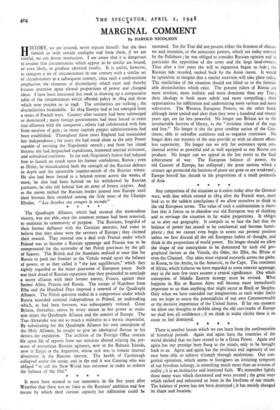 By HAROLD NICOLSON HISTORY, we are assured, never• repeats herself : but she does furnish us with certain analogies and from these, if we are careful, we can derive instruction. I am aware that it is dangerous to assume that circumstances which appear to be similar are bound, or even likely, to produce identical results. It is useful, however, to compare a set of circumstances in one century with a similar set of circumstances in a subsequent century, since such a confrontation emphasises the elements of dissimilarity which exist and thereby focuses attention upon altered proportions of power and changed ideas. I have been interested this week in drawing up a comparative table of the circumstances which affected policy in 1814 and those which now perplex us in 1948. The similarities are striking ; the dissimilarities formidable. In 1814 Europe had at last emerged from a series of French wars. Country after country had been submerged or dominated ; many foreign governments had been forced to enter into alliances with the conqueror ; others had collaborated with him from motives of gain ; in many capitals puppet administrations had been established. Throughout those years England had maintained her independence ; for years she had stood alone as the only Power capable of resisting the Napoleonic onrush ; and from her island fortress she had despatched expeditions, fomented internal resistance, and subsidised coalitions. In the end, Napoleon's hubris had induced him to launch an attack upon his former confederate, Russia ; even as Hitler, he miscalculated both the strength of the Russian defence in depth and the inexorable counter-attack of the Russian winter. He also had been forced to a belated retreat across the wastes of snow, he also had been harried on his withdrawal by Russian partisans, he also left behind him an army of frozen corpses. And as the snows melted the Russian hordes poured into Europe until their bivouac fires twinkled among the little trees of the Champs Elysies. " Les Scythes ont conquis le monde."

* * * * The Quadruple Alliance, which had secured this tremendous victory, was not able, once the common menace had been removed, to maintain its community of purpose. The Russians, forgetful of their former dalliance with the Corsican monster, had come to believe that they alone were the saviours of Europe ; they claimed their reward. They entered into a deal with Prussia under which Poland was to become a Russian appanage and Prussia was to be compensated for the surrender of her Polish provinces by the gift of Saxony. The British and the Austrians realised at once that for Russia to push her frontier to the Vistula would upset the balance of power, or as they called it " the just equilibrium," which they rightly regarded as the major guarantee of European peace. Such was their dread of Russian expansion that they proceeded to conclude a secret alliance with their former enemy, France, against their former Allies, Prussia and Russia. The escape of Napoleon from Elba and the Hundred Days imposed a renewal of the Quadruple Alliance. The Polish question ended in a compromise under which Russia accorded nominal independence to Poland, an undertaking which, as had been foreseen, was subsequently violated. Great Britain, thereafter, strove by every means in her power to main- tain intact the Quadruple Alliance and the concert of Europe. The Tsar Alexander was not so much a militarist as a mystic imperialist. By substituting for the Quadruple Alliance his own conception of the Holy Alliance, he sought to give an ideological flavour to his desires for expansion. The archives of the Foreign Office contain file upon file of reports from our missions abroad relating the pre- sence of mysterious Russian agitators, now in the Balearic Islands, now in Egypt or the Argentine, whose task was to foment internal dissension in the Russian interest. The health of Castlereagh collapsed under the strain, and in the end it was Canning who was obliged " to call the New World into existence in order to redress the balance of the Old."

* * * * It must have seemed to our statesmen in the five years after Waterloo that there was no limit to the Russians' ambition and few means by which their curious capacity for infiltration could be stemmed. Yet the Tsar did not possess either the firmness of charac- ter and intention, or the autocratic powers, which are today enjoyed by the Politburo ; he was obliged to consider Russian-opinion and in particular the opposition of the army and the large land-owners.

Thus after a few years the will to expansion began to fade ; the Russian tide receded, sucked back by the Asian moon. It would be optimistic to imagine that a similar recession will take place today. The similarities of the situation should not blind us to the formid- able dissimilarities which exist. The present rulers of Russia are more resolute, more realistic and more dominant than any Tsar ; their ideology is both more subtle and more compelling ; their opportunities for infiltration and undermining more various and more subversive. The Western European Powers, on the other hand, although more united and alert than they were a hundred and twenty years ago, are far less powerful. No longer can Britain act as the invulnerable fortress of liberty, as the "inviolate island of the sage and free." No longer is she the great creditor nation of the Con- tinent, able to subsidise coalitions and to organise resistance. No longer does our mastery of the seas provide us with an almost effort- less superiority. No longer can we rely for assistance upon con- tinental armies as powerful and as well equipped as any Russia can produce. No longer can we appeal in the last resort to the final arbitrament of war. The European balance of power, the old Concert of Europe, has collapsed ; the great nations which a century ago protected the bastions of peace are gone or are weakened ; Europe herself has shrunk to the proportions of a small peninsula of Asia.

* * * * Any comparison of the situation as it exists today after the German wars, with that which existed in 1814 after the French wars, must lead us to the saddest conclusions if we allow ourselves to think in the old European terms. The value of such a confrontation is there- fore that it forces us to abandon our old European way of thinking and to envisage the situation in far wider proportions. It obliges us to alter our geography. It compels us to face the fact that the balance of power has ceased to be continental and become hemis- pheric ; that we cannot even begin to assess our present position unless we first discard all the old European habits of thought, and think in the proportions of world power. No longer should we allow the shape of our conceptions to be dominated by such old geo- graphical factors as the Vistula, the Oder, the Elbe, the Rhine or even the Channel. Our ideas must expand outwards across the globe, to Korea, to the Arctic, to the Antarctic, to the Cape. The continent of Africa, which hitherto we have regarded as some exterior appanage, may in the next few years assume a central significance. Our whole conception of Middle Eastern strategy must be revised. - What happens in Rio or Buenos Aires will become more immediately important to us than anything that might occur at Bitolj or Skoplye. Only when we have extended our imaginations to such wider limits can we hope to assess the potentialities of our own Commonwealth or the decisive importance of the United States. If for one moment we allow our thoughts to dribble along the old cart-tracks of Europe we shall lose all confidence ; if we think in wider circles there is no cause to feel dismayed. • * * * There is another lesson which we can learn from the confrontation of historical periods. Again and again have the Countries of the world decided that we have ceased to be a Great Power. Again and again has our prestige been flung to the winds, only to be brought back to us. Again and again has the resilience and ingenuity of our race been able to achieve triumph through misfortune. Our con- genital optimism, which seems to foreigners an irritating symptom of our frivolous lethargy, is something much more than an evasion of reality ; it is an instinctive and irrational faith. We remember lightly those many wars which threatened and were averted ; the great wars which racked and exhausted us loom in the forefront of our minds. The balance of power has not been destroyed ; it has merely changed its shape and location.