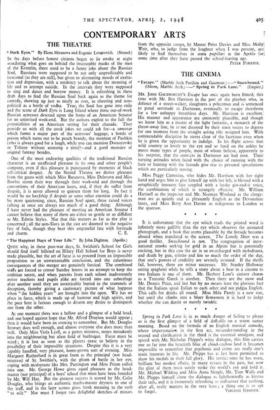 c. Dark Eyes." By Elena Miranova and Eugenie Leolatovich. (Strand.) IN the days before honest citizens began to lie awake at night wondering what goes on behind the inscrutable masks of the men of the Kremlin, there used to be a funny joke about the Russian Soul. Russians were supposed to be not only unpredictable and irrational (as they are still), but given-to alternating moods of exalta- tion and depression, with a tendency to talk about the meaning of life and to attempt suicide. In the intervals they were supposed to sing and dance and borrow money. It is refreshing in these drab days to find the Russian Soul back again as the theme for comedy, showing up just as nicely as ever, as cheering and non- political as a bottle of vodka. True, the Soul has gone into exile and the scene of Dark Eyes is Long Island where three out-of-work Russian actresses descend upon the home of an American Senator for an uninvited week-end. But the authors exploit to the full the potentialities of an American setting for their charade. They provide us with all the stock jokes we could ask for—a samovar which forms a major part of the actresses' luggage, a bottle of poison which turns out to be peach brandy, the mention of Pushkin (who is always good for a laugh, while you can mention Dostoyevsky or Tolstoy without arousing a titter)—and a good measure of original fantasy besides.

One of the most endearing qualities of the traditional Russian character is an unaffected pleasure in its own and other people's company, even if this pleasure is punctuated by moments of black self-critical despair. At the Strand Theatre we derive pleasure from the gusto with which Miss Baranova, Miss Delavova and Miss Rowles storm their way through their week-end and through the conventions of their American hosts, and, if they do suffer from despair, it is never allowed to quieten them for long. In fact it would be no hardship if despair or some other emotion could do a bit more quietening, since, Russian Soul apart, three raised voices talking at once are always too much Of a good thing. Although I have never had the pleasure of meeting an American Senator I cannot believe that many of them are either so gentle or so diffident as Mr. Edwin Styles. Not that this matters as far as the play is concerned ; all the non-Slays in the cast are doomed to the negative fate of foils, though they bear, this ungrateful fate with fortitude