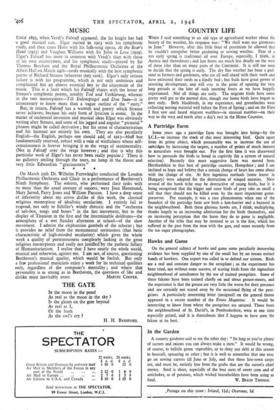 SINCE 1893, when Verdi's Falstaff appeared, the fat knight has had -a good musical sun. Elgar started in 1913 with his symphonic study, and then came Hoist with his folk-song opera, At the Boar's Head (1925) and Vaughan Williams with Sir John in Love (1929). Elgar's Falstaff has more in common with Verdi's than with those of his own countrymen, and his symphonic study—played by Sir Thomas Beecham and the Royal Philharmonic Orchestra at the Albert Hall on March 24th—ranks musically with the best symphonic poems of Richard Strauss (wherever they rank). Elgar's only serious failure is with his programme, which is not only ambitious and complicated but an almost essential key to the enjoyment of the music. This is a fault which his Falstaff shares with the lesser of Strauss's symphonic poems, notably Tod and Verkldrung, whereas in the two masterpieces—Till Eulenspiegel and Don Juan—it is unnecessary to know more than a vague outline of the " story."

But, in return, Falstaff has a warmth and poetry which Strauss never achieves, because his only form of lyricism is erotic. In the matter of orchestral invention and musical ideas Elgar was obviously writing after Strauss, and some of his jagged and angular " pictorial " phrases might be called derivative ; but his sense of characterisation and his humour are entirely his own. They are also peculiarly English—the English, perhaps one should add, of 1913—bluff but fundamentally reserved, robust with a vein of wistfulness whose self- consciousness is forever bringing it to the verge of sentimentality. (Not in Falstaff over the verge however; and that is why this particular work of Elgar's has never been really popular.) There is no gallantry smiling through the tears, no lump in the throat and very little Edwardian " graciousness." * * * *

On March 25th Dr. Wilhelm Furtwingler -conducted the London Philharmonic Orchestra and Choir in a performance of Beethoven's Ninth Symphony. The soloists, who performed their tasks with no more than the usual amount of success were Joan Hammond, Mary Jarred, Parry Jones and William Parsons. I have a deep sense of inferiority about my active dislike of this work, the classical religious masterpiece of idealistic secularism. I entirely fail to respond, not only to Schiller's windy rhetoric and the "orchestra of salt-box, tongs and bones " in the last movement, but to the display of Titanism in the first and the interminable doldrums—the atmosphere of a wet Sunday afternoon at school—of the slow movement. I admire the elephantine gambols of the scherzo ; but it provides no relief from the monumental seriousness (that basic characteristic of high-minded secularists) which gives the whole work a quality of portentousness completely lacking in the great religious masterpieces and really not justifiediv the pathetic fallacy of Humanitarianism. I realise that I have nearly the whole world, musical and otherwise, against me. I am not, of course, questioning Beethoven's musical quality, which would be foolish. But only a few professional musicians enjoy a work for its technical qualities only, regardless of the composer's mentality ; and where that personality is as strong as in Beethoven, the questions of like and