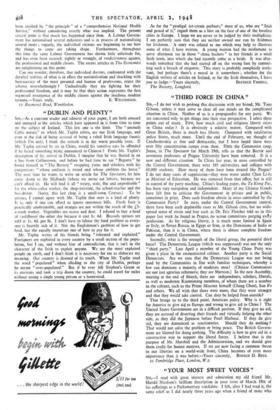 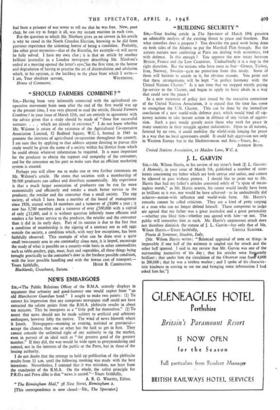 "YOUR MOST SWEET VOICES "

SIR,—I read with great interest and admiration my old friend Mr. Harold Nicolson's brilliant description in your issue of March 19th of his sufferings as a Parliamentary candidate. I felt, after I had read it, the same relief as I did nearly three years ago when a friend of mine who

bad been a prisoner of war wrote to tell me that he was free. Now, poor chap, he can try to forget it all, was my instant reaction in each case.

But the question to which Mr. Nicolson gives us no answer in his article is why he stood in the North Croydon Election, knowing as he did from previous experience the sickening horror of being a candidate. Probably, like other great mysteries—that of the Kremlin, for example—it will never be fully solved. I have my own clue ; it is that an article by another brilliant journalist in a London newspaper describing Mr. Nicolion's ordeal at a meeting opened the latter's eyes, for the first time, to the horror and degradation of having to practise the art of dissimulation and adulation which, in his opinion, is the latchkey to the place from which I write.—