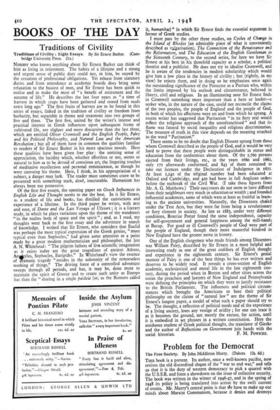 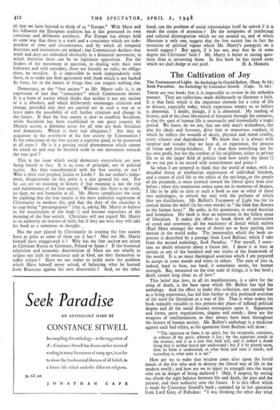 Problem for the Democrat

THIS book is a portent. Its author, once a well-known pacifist, now revives the old discredited slogan of the " war to end war," and tells us that it is the duty of western democracy to pick a quarrel with the U.S.S.R. and force a showdown on the issue of collective security. The book was written in the winter of 1946-47, and in the spring of 1948 its policy is being translated into action by the swift current of events. Mr. Murry's central point is that vie have to make up our minds about Marxist Communism, because it denies and destroys all that we hi've learned to think of as "Europe." With Marx and his followers the European tradition has at last generated its own conscious and deliberate antithesis. For Europe has always held m some way that there is a truth and a conscience which are inde- pendent of time and circumstance, and by which all temporal doctrines and institutions are judged ; but Communism declares that truth and duty are embodied absolutely in a historical movement, to which therefore there can be no legitimate opposition. For the leaders of the movement in question, in dealing with their own followers and with outsiders, there are literally no rules, no obliga- tions, no morality. It is impossible to work independently with them, or to make any firm agreement with them which is not backed by force, for in the nature of things they can respect nothing else.

Democracy, or the " free society " as Mr. Murry calls it, is an expression of just that " conscience " which Communism denies. It is a form of society which thinks that neither it nor any section of it is absolute, and which deliberately encourages criticism and change, provided that they are carried out in such a way as to leave open the possibility of still further criticism and change in the future. If then the free society is slow to establish Socialism, while Socialism has been established in one great country by Marxist action, a dilemma arises for all who are both Socialists and democrats. Which is their real allegiance ? Are they to acquiesce in the overthrow of the free society by Communists ? Is the conscience of the free society a supreme good, to be preserved at all costs ? Or is it a passing social phenomenon which cannot be relied on and may be brushed aside in our movement towards the true goal ?

This is the issue which social democrats everywhere are now being forced to face. It is an issue of principle, not of political tactics. Are they consubstantial with the free society, or not ? Who is their real prophet, Lenin or Locke ? In our author's judge- ment, disagreement on this point is a just ground for war. For he can see no meaning in history if that meaning is not the rise and maintenance of the free society. Without this there is no truth, no duty, no real humanity at all. Mr. Murry complicates the issue by claiming that the free society is the most authentic expression of Christianity in modern life, and that the duty of the churches is to stop being " presumptuous " (that is, asking Mr. Murry to believe in the resurrection of the body !) and become expositors of the meaning of the free society. Christians will not regard Mr. Murry as an authority on matters of faith, but if they are wise they will take his book as a summons to thought.

Has the part played by Christianity in creating the free society been as great as some of them say it has ? May not Mr. Murry himself have exaggerated it ? Why has the free society not arisen in Christian Russia or Germany, Poland or Spain ? If the historical relativism and economic determinism of Marx are not wholly to eclipse our faith in conscience and in God, are they themselves to suffer eclipse ? Have we not rather to tackle anew the problem which Marx himself never solved, of balancing what he learned from Rousseau against his own discoveries ? And, on the other hand, can the problem of social relationships itself be solved if it is made the centre of attention ? Do the symptoms of intellectual and cultural disintegration which we see around us, and of which Marxism is only onc, suggest that the free society has in fact the resources of spiritual vigour which Mr. Murry's panegyric on it would suggest ? But again, if it has not, may that be in some degree the Christians' fault ? Mr. Murry is better at raising ques- tions than at answering them. In this book he has' raised some

which we shall dodge at our peril. H. A. HODGES.