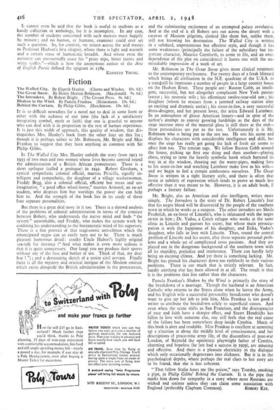 IT is so difficult nowadays for a novel not to deal in some form or other with the sickness of our time (the lack of a satisfactory integrating symbol, myth or faith) that one is grateful to anyone who can deal with it in proportion to the rest of human experience. It is just this width of approach, this quality of wisdom, that dis- tinguishes Mrs. Huxley's book from the other four on this list ; though it is perhaps unfair to Mr. Robinson, Mr. Bright and Miss Frankau to suggest that they have anything in common with Sir Philip Gibbs.

In The Walled City Mrs. Huxley unfolds the story from 1913 to 1933 of two men and two women whose lives become centred round the administration of a British African protectorate. There is a short epilogue (called a prologue) in 1942. Robert Gresham, .a cynical sympathetic colonial official, marries Priscilla, equally in- telligent and sympathetic, the daughter of a village washerwoman. Freddy Begg, also a colonial official, efficient but mean and un- imaginative, "a good office wheel-horse," marries Armorel, an ex-art student, who despises him but worships the power she can help him to. And the strength of the book lies in its study of these four separate personalities.

But there is a great deal more in it too. There is a shrewd analysis of the problems of colonial administration in terms of the contrast between Robert, who understands the native mind and finds " the system " unworkable, and Freddy, who makes the system work by confining his understanding to the bureaucratic mind of his superiors. There is a fine portrait of that tragi-comic anti-climax which the emancipated negro can so easily turn out to be. There is much pleasant humorous detail: cranky Uncle Hubert's highly original sex-talk for instance (" And what makes it even more tedious is that it is quite unnecessary. Our fungi you see produce their spores without any of the fuss and bother of sex. Think of that, my dear boy ! "); and a devastating sketch of a senior civil servant. Finally there is all the mystery and oriental intrigue of the Moslem emirate which exists alongside the British administration in the protectorate, and the culminating excitement of an attempted palace revolution. And at the end of it all Robert sets out across the desert with a caravan of Moslem pilgrims, clothed like them but, unlike them, still not knowing his destination. The Walled City is written in a subdued, unpretentious but effective style, and though it has some weaknesses (principally the failure of the subsidiary but im- portant character, Maurice Cornforth, to come to life, and an over- dependence of the plot on coincidence) it leaves one with the un- mistakable impression of a work of art.

Mr. Robinson in The Great Snow gives more clinical treatment to the contemporary restlessness. For twenty days of a freak blizzard which brings all civilisation in the N.E. quadrant of the U.S.A. to a standstill he imprisons a number of people in a large country house on the Hudson River. These people are : Ruston Cobb, an intelli- gent, successful, but not- altogether complacent New York patents lawyer ; his neurotic wife ; his effeminate twelve-year-old son ; his daughter (whom he rescues from a jammed railway station after an exciting and dramatic sortie) ; his sister-in-law, a sexy successful dress-designer, and her present lover, the artist Edward Laimbeer. In an atmosphere of glossy American luxury—and in spite of the author's attempt to convey growing hardships as the days of the siege increase most of the material gloss is still there at the end— these personalities are put to the test. Unfortunately it is Mr. Robinson who is being put to the test too. He sets his scene and displays his characters with considerable intelligence and skill, but once the siege has really got going the lack of fresh air seems to affect him too. The tension sags. We follow Ruston Cobb around the house, picking up first one thing and then another—playing chess, trying to tame the heavily symbolic hawk which battered its way in at the window, thawing out the water-pipes, making love to his sister-in-law and watching Laimbeer make love to his wife— and we begin to feel a certain aimlessness ourselves. The Great Snow is written in a tight literary style, and there is often that strain at subtlety of expression which tends to prove so much less effective than it was meant to be. However, it is an adult book, if perhaps a literary failure.

Mr. Bright, also an American and also intelligent, writes more simply. The Intruders is the story of Dr. Robert Lincoln's fear that his negro blood will be discovered by the people of the southern town in which he works as a surgeon. The other intruders are Sheila Frederick, an ex-lover of Lincoln's, who is infatuated with the negro strain in him ; Dr. Vadso, a Czech refugee who works at the same clinic as Lincoln and guesses his secret, but whose main preoccu- pation is with the happiness of his daughter, and Erika, Vadso's daughter, who falls in love with Lincoln. Thus, round the central problem of Lincoln and his secret, play three separate personal prob- lems and a whole set of complicated cross passions. And they are played out in the dangerous background of the southern town with all its stupidity, prejudice and intolerance. There can hardly help being an exciting climax. And yet there is something lacking. Mr. Bright has pinned his characters down too ruthlessly to their various problems. There is too much that is strictly relevant. In fact, hardly anything else has, been allowed in at all. The result is that it is the problems that live rather than the characters.

Pamela Frankau's Shaken by the Wind is primarily the story of the breakdown of a marriage. Though the husband is an American Catholic who returns to the States alone when he leaves the Army, and his English wife a successful personality broadcaster who doesn't want to give up her job to join him, Miss Frankau is too good a writer to attribute the breakdown solely to superficial causes. And even when the scene shifts to San Francisco, and the discrepancies of race and faith have a sharper effect, and Stuart Hendricks has fallen in love with someone else, one still feels that the real cause of the failure has been somewhere deep inside Cynthia. Much of this book is alert and readable. Miss Frankau is excellent at summing up a situation at about the middle level of consciousness, and her descriptions of peace-time army life, of the discomforts of post-War London, of Reynold the optimistic playwright father of Cynthia, charming and hopeless (he last had a success in 1929), are amusing and effective. And there is a pleasant electricity in the dialogue which only occasionally degenerates into slickness. But it is in the psychological depths, where perhaps she real clues to her story are to be found, that she is less coherent.

" That fellow Stalin hates me like poison," says Trotsky, smoking a pipe, in Philip Gibbs' Behind the Curtain. It is the pipe that marks him down for sympathy in a story where most Russians are wicked and sinister unless they can claim some association with