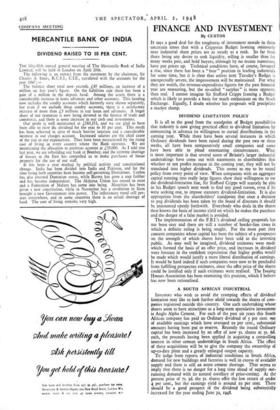 FINANCE AND INVESTMENT By CUSTOS IT says a good deal

for the toughness of investment morale in these uncertain times that with a Crippsian Budget looming ominously near industrial share prices are as steady as a rock. So far from there being any desire to seek liquidity, selling is smaller than for many weeks past, and bold buyers, although by no means numerous, have put prices up. Technical conditions have, of course, favoured a rise, since there has been a " bear " position in leading industrials for some time, but it is clear that unless next Tuesday's Budget is unexpectedly severe, the improvement will be maintained. For what they are worth, the revenue-expenditure figures for the past financial year are reassuring, but the so-called " surplus" is more apparent than real. I cannot imagine Sir Stafford Cripps framing a Budget which is likely to provide a basis for much entlausiasm on the Stock Exchange. Equally, I doubt whether his proposals will precipitate a market slump.

DIVIDEND LIMITATION POLICY • - It is all to the good from the standpoint of Budget possibilities that industry is now giving practical effect to dividend limitation by announcing in advance its willingness to curtail distributions in the coming year. While there have been several instances in which Ordinary dividends have been raised during the past two or three weeks, all have been comparatively small companies and some have been able to plead extenuating circumstances. What is more important is that several score of Britain's larger industrial undertakings have come out with statements to shareholders that whether or not profits increase in the coming year, they will not be translated into higher dividends. This seems to me to be sound policy from every point of view. When companies with an aggregate capital running into really large figures show their willingness to toe the dividend-limitation line, Sir Stafford Cripps will scarcely be able in his Budget speech next week to find any good reason, even if he were seeking one, to impose statutory dividend-limitation. It is also appropriate from the shareholders' standpoint that once a decision to peg dividends has been taken by the board of directors it should be announced openly forthwith. Everybody who deals in the shares then knows the basis of income yield on which he makes the purchase and the danger of a false market is avoided.

The implementation of the F.B.I.'s dividend ceiling proposals has not been easy and there ate still a number of border-line cases in which a definite ruling is being sought. For the most part they concern companies whose capital has been the subject of a prospectus on the strength of which shares have been sold to the investing public. As may well be imagined, dividend estimates were made which formed the basis of an offer price, and increases in dividend were forecast in the confident expectation that higher profits would be made which would justify a more liberal distribution of earnings. It would be hard indeed if such companies were now to be precluded from fulfilling prospectus estimates, since the offer price of the shares could be justified only if such estimates were realised. The Issuing Houses Association has been examining this position, which I believe has now been rationalised.

Investors who wish to avoid the cramping effects of dividend limitation may like to-look further afield towards the shares of com- panies registered outside this country; One such undertaking whose shares seem to have attractions as a long-term speculative investment is Anglo Alpha Cement. For each of the past six years this South African company has paid an Ordinary dividend of 5 per cent. out of available earnings which have averaged zo per cent., substantial amounts having been put to reserve. Recently the issued Ordinary capital has been increased by an offer of new 5s. shares at 5s. 6d. each, the proceeds having been applied in acquiring a controlling interest in other cement undertakings in South Africa. The effect of these acquisitions will be to give the company the ownership of up-to-date plant and a greatly enlarged output capacity.

To judge from reports of industrial conditions in South Africa, demand for new buildings and factories is well in excess of available supply and there is still an acute cement shortage. That seems to imply that there is no danger for a long time ahead of supply out- running demand with its natural corollary of price-cutting. At the present price of 7s. 3d. the 5s. shares offer the low return of under 4 per cent., but the earnings yield is around zo per cent. There should be a good prospect of the dividend being substantially increased for the year ending June 3o, 1948.