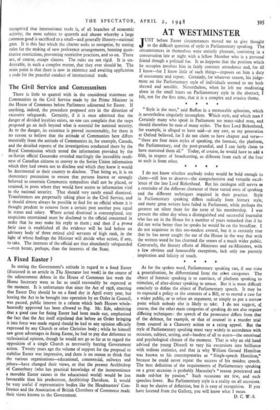 TUST before Easter circumstances moved me to give thought j to the difficult question of style in Parliamentary speaking. The circumstances in themselves were entirely pleasant, consisting in a conversation late at night with a fellow Member who is a personal friend though a political foe. It so happens that the position which he occupies involves him in fairly constant attendance and, for all I know—for I know little of such things—imposes on him a duty of assessment and report. Certainly, for whatever reason, his judge- ment on the Parliamentary style of individuals seemed to me both shrewd and sensible. Nevertheless, when he left me meditating alone in the small hours on Parliamentary style in the abstract, I felt, not for the first time, that it is a complex and evasive theme.

* * * " Style is the man," said Buffon in a memorable aphorism, which is nevertheless singularly incomplete. Which style, and which man ? Certainly many who speak in Parliament are many-sided men, and should therefore be men of many styles. The first Lord Birkenhead, for example, is alleged to have said—at any rate, so my generation at Oxford believed, for I do not claim to have chapter and verse- " there are four main styles of speaking, the forensic, the platform, the Parliamentary, and the post-prandial, and I can fairly claim to have mastered them all." Today, of course, he would have to add a fifth, in respect of broadcasting, as different from each of the four as each is from other.

I do not know whether anybody today would be bold enough to claim—still less to deserve—the comprehensive and versatile excel- lence of the late Lord Birkenhead. But his catalogue still serves as a reminder of the different character of these varied sorts of speaking and the different techniques required in their practice. Style in Parliamentary speaking differs radically from literary style, and many great writers have failed in Parliament, while perhaps the greatest sat silent there for the term of his membership. I was present the other day when a distinguished and successful journalist who has sat in the House for a number of years remarked that if he did not write better than he speaks he would be on the breadline. I do not acquiesce in this too-modest avowal, but it is certainly true that he has never caught the ear of the House in the way that with the written word he has charmed the senses of a much wider public. Conversely, the literary efforts of Ministers and ex-Ministers, with a few obvious and honourable exceptions, lack only too patently inspiration and felicity of touch.

* * * * As for the spoken word, Parliamentary speaking can, if one risks a, generalisation, be differentiated from the other categories. The object of forensic speaking is to convince, of platform speaking to stimulate, of after-dinner speaking to amuse. But it is more difficult concisely to define the object of Parliamentary speech. It may be to expound a policy or the contents of a Bill, or to record a case for a wider public, or to refute an argument, or simply to put a narrow point which nobody else is likely to take. I do not suggest, of. course, that the other main categories of speaking do not also require differing techniques: the speech of the prosecutor differs from that of the defence, for example, or that of counsel in a murder trial from counsel in a Chancery action or a rating appeal. But the style of Parliamentary speaking must vary widely in accordance with occasion, subject, setting, and—hardest of all to assess—the emotional and psychological climate of the moment. That is why an old hand advised the young Disraeli to vary his excursions into brilliance with tedious statistics, and that is why William Gerard Hamilton was known to his contemporaries as " Single-speech Hamilton," because he could never repeat the success of his maiden speech. The best definition of the requirements of Parliamentary speaking on a great occasion is probably Macaulay's "reason penetrated and made red-hot by passion." Such occasions are few, and such speeches fewer. But Parliamentary style is a reality on all occasions. It may be elusive of definition, but it is easy of recognition. If you have listened from the Gallery, you will know what I mean.