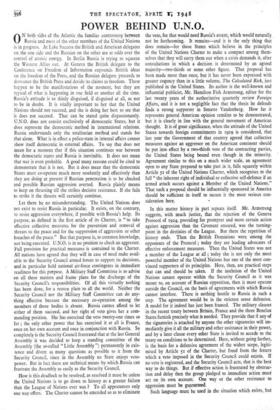 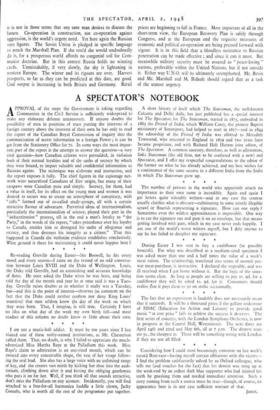 ON both sides of the Atlantic the familiar controversy between Russia and most of the other members of the United Nations is in progress. At Lake Success the British and American delegates on the one side and the Russian on the other are at odds over the control of atomic energy. In Berlin Russia is trying to squeeze the Western Allies out. At Geneva the British delegate to the Conference on Freedom of Information expounds British ideas on the freedom of the Press, and the Russian delegate proceeds to denounce the British Press and deride its claims to freedom. These happen to be the manifestations of the moment, but they are typical of what is happening in one field or another all the time. Russia's attitude is so thinly disguised, if disguised at all, as not to be in doubt. It is vitally important to her that the United Nations should not succeed, and she is doing her best to see that it does not succeed. That can be stated quite dispassionately. U.N.O. does not consist exclusively of democratic States, but it does represent the democratic method in international relations. Russia understands only the totalitarian method and stands for that alone. What is in effect a police-state in internal affairs cannot show itself democratic in external affairs. To say that does not mean for a moment that if this situation continues war between the democratic states and Russia is inevitable. It does not mean that war is even probable. A good many reasons could be cited to demonstrate that it is not. But it does mean that the democratic States must co-operate much more resolutely and effectively than they are doing at present if Russian penetration is to be checked and possible Russian aggression averted. Russia plainly means to keep on thrusting till she strikes decisive resistance. If she fails to strike it the thrusts will certainly continue.

Let there be no misunderstanding. The United Nations does not exist to resist Russia in particular. It exists, on the contrary, to resist aggression everywhere, if possible with Russia's help. Its purpose, as defined in the first article of its Charter, is " to take effective collective measures for the prevention and removal of threats to the peace and for the suppression of aggression or other breaches of the peace." But that purpose is, to common knowledge, not being executed. U.N.O. is in no position to check an aggressor. Full provision for practical measures is contained in the Charter. All nations have agreed that they will in case of need make avail- able to the Security Council armed forces to support its decisions, and in particular hold national air-force contingents in immediate readiness for this purpose. A Military Staff Committee is to advise on all these matters and frame plans for the discharge of the Security Council's responsibilities. Of all this virtually nothing has been done, for a reason plain to all the world. Neither the Security Council nor the Military Staff Committee can do any- thing effective because the necessary co-operation among the members of those bodies is absent. Russia cannot afford to let either of them succeed, and her right of veto gives her a com- manding position. She has exercised the veto twenty-one times so far ; the only other power that has exercised it at all is France, once on her own account and once in conjunction with Russia. So completely is the Security Council frustrated that at the last General Assembly it was decided to keep a standing committee of the Assembly (the so-called " Little Assembly ") permanently in exis- tence and divert as many questions as possible to it from the Security Council, since in the Assembly no State enjoys veto- power. But in fact there are technical means by which•Russia can frustrate the Assembly as easily as the Security Council How is this deadlock to be resolved, as resolved it must be unless the United Nations is to go down to history as a greater failure than the League of Nations ever was ? To all appearances only one way offers. The Charter cannot be amended so as to eliminate the veto, for that would need Russia's assent, which would naturally not be forthcoming. It remains—and it is the only thing that does remain—for those States which believe in the principles of the United Nations Charter to make a compact among them- selves that they will carry them out when a crisis demands it, after consultations in which a decision is determined by an agreed majority—two-thirds or some other figure. That proposal has been made more than once, but it has never been expressed with greater cogency than in a little volume, The Calculated Risk, just published in the United States. Its author is the well-known and influential publicist, Mr. Hamilton Fish Armstrong, editor for the last twenty years of the authoritative quarterly review Foreign Affairs, and it is not a negligible fact that the thesis he defends finds a strong supporter in Senator Vandenberg. How far it represents general American opinion remains to be demonstrated, but it is clearly in line with the general movement of American thought. It is of great significance, when the attitude of the United States towards foreign commitments in 1919 is considered, that last year the Government of that country agreed that collective measures against an aggressor on the American continent should be put into effect by a two-thirds vote of the contracting parties, the United States being bound even though in the minority. Agreement similar to this on a much wider scale, an agreement open to any State prepared to take part in it, falls squarely within Article 51 of the United Nations Charter, which recognises to the full " the inherent right of individual or collective self-defence if an armed attack occurs against a Member of the United Nations." That such a proposal should be influentially sponsored in America should be sufficient in itself to secure it the most serious .con- sideration here.

In this matter history in part repeats itself. Mr. Armstrong suggests, with much justice, that the rejection of the Geneva Protocol of 1924, providing for prompter and more certain action against aggression than the Covenant ensured, was the turning- point in the destinies of the League. But there the repetition of history ends. Then the British Dominions were among the opponents of the Protocol ;• today they are leading advocates of effective enforcement measures. Then the United States was not a member of the League at all ; today she is not only the most powerful member of the United Nations but one of the most con- vinced supporters of its principles. Here, then, are practical steps that can and should be taken. If the intention of the United Nations cannot operate within the Security Council as it was meant to, on account of Russian opposition, then it must operate outside the Council, on the basis of agreements with which Russia cannot interfere. There is nothing hostile to Russia in such a step. The agreement would be in the strictest sense defensive. A model for it indeed has just been framed. The military clauses in the recent treaty between Britain, France and the three Benelux States furnish precisely what is needed. They provide that if any of the signatories is attacked by anyone the other signatories will im- mediately. give it all the military and other assistance in their power, and by a later clause every other State is invited to accede to the treaty on conditions to be determined. Here, without going farther, is the basis for a defensive agreement of the widest scope, legiti- mised by Article 51 of the Charter, but freed from the fetters which a veto imposed in the Security Council could enjoin. If no veto is registered, and the Security Council acts, that is the best way to do things. But if effective action is frustrated by obstruc- tion and delay then the group pledged to immediate action must act on its own account. One way or the other resistance to aggression must be guaranteed.

Such language must be used in the situation which exists, but it is not in those terms that any sane man desires to discuss the future. Co-operation in construction, not co-operation against aggression, is the world's urgent need. Yet here again the Russian veto figures. The Soviet Union is pledged in specific language to wreck the Marshall Plan. If she could she would undoubtedly do it, for a prosperous world affords no congenial soil for Com- munist doctrine. But in this contest Russia holds no winning cards. Unmistakably, if very slowly, the sky is lightening in western Europe. The winter and its rigours are over. Harvest prospects, so far as they can be predicted at this date, are good. Coal output is increasing in both Britain and Germany. Retail prices are beginning to fall in France. Most important of all in the short-term view, the European Recovery Plan is safely through Congress, and at the European end the requisite measures of economic and political co-operation are being pressed forward with vigour. It is in this field that a bloodless resistance to Russian penetration can be made effective ; and since it can it must. But meanwhile military security must be assured to " peace-loving " nations, preferably within the United Nations, but if not outside it. Either way U.N.O. will be ultimately strengthened. Mr. Bevin and Mr. Marshall and M. Bidault should regard that as a task of the utmost urgency.