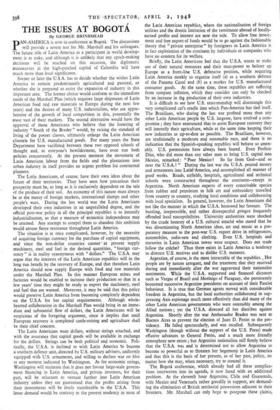 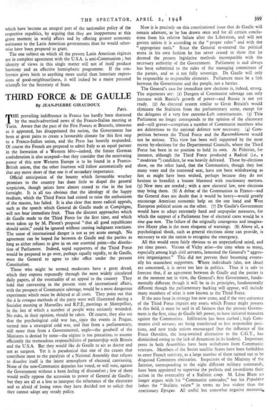 THE ISSUES AT BOGOTA

pAN-AMERICA is now in conference at Bogota. The discussions will provide a severe test for Mr. Marshall and his colleagues. The future role of Latin America as a participant in world develop- ment is at stake, and although it is unlikely that any epoch-making decisions will be reached on this occasion, the diplomatic manoeuvres in the high-perched capital of Colombia will have much more than local significance.

Sooner or later the U.S.A. has to decide whether she wishes Latin America to remain predominantly agricultural and pastoral, or whether she is prepared to assist the expansion of industry in this important area. The former choice would conform to the immediate needs of the Marshall Plan (which requires large shipments of Latin American food and raw materials to Europe during the next few years) and the desires of many U.S. industrialists, who are appre- hensive of the growth of local competition in this, potentially the most vast of their markets. The second alternative would have the approval of those Americans who believe that the fostering of industry " South of the Border " would, by raising the standard of living of the poorer classes, ultimately enlarge the Latin American clientele for U.S. manufactured goods. For many years the State Department have vacillated between these two opposed schools of thought and, to everyone's bewilderment, have even run both policies concurrently. At the present moment the movement of Latin American labour from the fields and the plantations into urban industry in itself provides an urgent problem for continental planners.

The Latin Americans, of course, have their own ideas about the future of their territories. They have seen how precarious their prosperity must be, so long as it is exclusively dependent on the sale of the produce of their soil. An economy of this nature must always be at the mercy of foreign markets, international slumps and other people's wars. During the last world war the Latin Americans developed their own industries in an unparalleled degree, and the official post-war policy in all the principal republics is to intensify industrialisation, so that a measure of economic independence may be attained. Any attempt to compel them to abandon this ambition would arouse fierce resistance throughout Latin America.

The situation is at once complicated, however, by the necessity of acquiring foreign currency for the purchase of capital equipment, and since the non-dollar countries cannot at present supply machinery, steel and fuel in the desired quantities, " foreign cur- rency " is in reality synonymous with " dollars." The U.S.A. may argue that the interests of the Latin American republics will in the long run benefit by the recovery of Europe, and that therefore Latin America should now supply Europe with food and raw materials under the Marshall Plan. In this manner European mines and factories would be enabled to increase their prOduction so that in a few years' time they might be ready to export the machinery, steel and fuel that are wanted. Moreover, it may be said that this policy would preserve Latin America from becoming completely dependent on the U.S.A. for her capital requirements. Although whole- hearted collaboration in the Marshall Plan would bring in an imme- diate and substantial flow of dollars, the Latin Americans will be suspicious of the foregoing argument, since it implies that until European recovery is completed cattle-raising and agriculture shall be their chief concern.

The Latin Americans want dollars, without strings attached, and with the assurance that capital goods will be available in exchange for the dollars. Strings can be both political and economic. Poli- tically, the U.S.A. is inclined to wish Latin America to become a southern defence unit, directed by U.S. military advisers, uniformly equipped with U.S. armaments, and willing to declare war en bloc at any moment indicated by Washington. As for economic strings, Washington will maintain that it does not favour large-scale govern- ment financing in Latin America, and private investors, for their part, will be reluctant to venture further into Latin American industry unless they are guaranteed that the profits arising from their investments will be freely transferable to the U.S.A. This latter demand would be contrary to the present tendency in most of

the Latin American republics, where the nationalisation of foreign utilities and the drastic limitation of the remittance abroad of locally- earned profits and interest are now the rule. To allow free invest- ment and free export of funds would be to go against the fashionable theory that " private enterprise " by foreigners in Latin America is in fact exploitation of the continent by individuals or companies who have no concern for its welfare.

Briefly, the Latin Americans feel that the U.S.A. wants to make use of their natural resources and their man-power to bolster up Europe as a front-line U.S. defensive position, while requiring Latin America meekly to organise itself (a) as a southern defence of the Panama Canal and (b) as a market for U.S. manufactured consumer goods. At the same time, these republics are suffering from rampant inflation, which they consider can only be checked by an increase in thg production of their own industries.

It is difficult to see how U.S. statesmanship will disentangle this very complicated cat's cradle into which Pan-America has tied itself. The Brazilians, who during the last war profited more than any other Latin American people by U.S. largesse, have evolved a com- promise ; they have announced that to assist European recovery they will intensify their agriculture, while at the same time keeping their new industries as up-to-date as possible. The Brazilians, however, are traditionally a moderate and reasonable race, and there is no indication that the Spanish-speaking republics will behave so amen- ably. U.S. pretensions have always been feared. Even Porfnio Diaz, who did more than any other man to bring U.S. capital into Mexico, remarked: "Poor Mexico! So far from God—and so near the U.S:A.! " During the last war the U.S.A. poured money and armaments into Latitt-Vimerica, and accomplished all manner of good works. Roads, airfields, hospitals, agricultural and technical schools were constructed throughout the continent—except in Argentina. North American experts of every conceivable species from rubber and petroleum to folk art and embroidery travelled from country to country, studying local conditions and collaborating with local specialists. In general, however, the Latin Americans did not like the manner in which the U.S.A. bestowed her favours. The bustling, irrepressible, and rather disrespectful gringos frequently offended local susceptibilities. University authorities were shocked by the crude honesty of a U.S. cultural attaché who stated that he was disseminating North American ideas, art and music as a pre- paratory measure to the post-war U.S. export drive in refrigerators, automobiles, radio-sets and clothing. Even U.S. hospitals and nurseries in Latin American towns were suspect. Does not trade follow the creche? Thus there exists in Latin America a tendency to distrust U.S. motives and to dislike U.S. manners.

Argentina, of course, is the most intractable of the republics.. Her people are by nature arrogant, and the treatment that they received during and immediately after the war aggravated their nationalist sentiments. While the U.S.A. supported and financed dictators such as Vargas of Brazil and Morinigo of Paraguay, she persistently boycotted successive Argentine presidents on account of their Fascist behaviour. It is true that German agents moved with considerable freedom in Argentina, but the local authorities collaborated in sup- pressing Axis espionage much more effectively than did many of the other Latin American goVernments who were ostensibly among the Allied nations ; yet the U.S.A. directed all her diatribes against Argentina. Shortly after the war Ambassador Braden was sent to Buenos Aires to prevent the election of Juan D. Peron to the pre- sidency. He failed spectacularly, and was recalled. Subsequently Washington (though without the support of the U.S. Press) made effusive advances to General Peron, and a much more friendly atmosphere now exists ; but Argentine nationalists still firmly believe that the U.S.A. was and is determined not to allow Argentina to become so powerful as to threaten her hegemony in Latin America and that this is the basis of her present, as of her past, policy, no matter how she may, when necessary, try to conceal it.

The Bogota conference, which already had all these complica- tions interwoven into its agenda, is now faced with an additional problem. At the eleventh hour Argentina, Chile and Guatemala, with Mexico and Venezuela rather greedily in support, are demand- ing the elimination of British territorial possessions adjacent to their frontiers. Mr. Marshall can only hope to postpone these claims, which have become an mtegral part of the nationalist policy of the respective republics, by arguing that they are inopportune at this grave moment in world affairs and by offering greater economic assistance to the Latin American governments than he would other- wise have been prepared to grant.

The one subject on which all the present Latin American regimes are in complete agreement with the U.S.A. is anti-Communism ; but identity of views in this single matter will not of itself produce harmony and an effective hemispheric programme. If the con- ference gives birth to anything more useful than luxuriant expres- sions of good-neighbourliness, it will indeed be a major personal triumph for the Secretary of State.