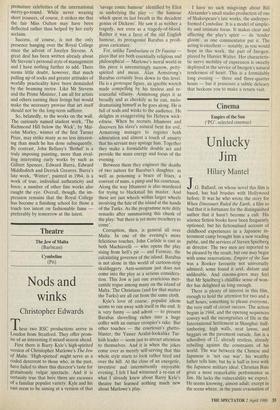 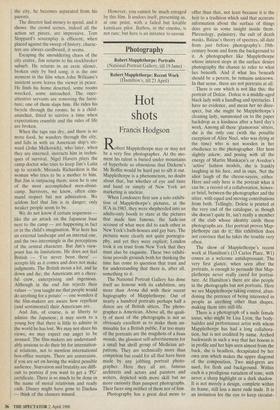 J.G. Ballard, on whose novel this film is based, has had brushes with Hollywood before. It was he who wrote the story for When Dinosaurs Ruled the Earth, a film so bad that it is fortunate for the distinguished author that it hasn't become a cult. His science fiction books have been frequently optioned, but his fictionalised account of childhood experiences in a Japanese in- ternment camp brought him a new reading public, and the services of Steven Spielberg as director. The two men are reported to be pleased by the result; but one may begin with some reservations. Empire of the Sun was a Booker favourite not universally admired; some found it arid, distant and unlikeable. And cinema-goers may feel that Mr Spielberg's childlike sense of won- der has delighted us long enough.

There is plenty of interest in this film, enough to hold the attention for two and a half hours; something to please everyone, the very stuff of circuit success. The action begins in 1944, and the opening sequences convey well the incongruities of life in the International Settlement in Shanghai: half- timbering, high walls, neat lawns, and beggars on the pavement outside. Jim is a schoolboy of 12, already restless, already rebelling against the constraints of his world. The war between the Chinese and Japanese is 'not our war', his wealthy father tells him; but he is half in love with the Japanese military ideal. Christian Bale gives a most remarkable performance as Jim. He lacks the vulnerability we expect. He seems knowing, almost adult; except in the scene where, in the panic evacuation of the city, he becomes separated from his parents.

The director had money to spend, and it shows: the crowd scenes, indeed all the action set pieces, are impressive. Tom Stoppard's screenplay is efficient; when placed against the sweep of history, charac- ters are always cardboard, it seems.

Escaping the smouldering chaos of the city centre, Jim returns to his stockbroker suburb. He returns in an eerie silence, broken only by bird song; it is the one moment in the film when John Williams's insistent score leaves the viewer in peace. He finds his home deserted, some rooms wrecked, some untouched. The once- attentive servants are removing the furni- ture; one of them slaps him. He rides his bicycle through the rooms; he is a child- anarchist, fitted to survive a time when expectations crumble and the rules of life are broken.

When the taps run dry, and there is no more food, he wanders through the city, and falls in with an American ship's ste- ward (John Malkovich), who later, when they are interned, instructs him in techni- ques of survival. Nigel Havers plays the camp doctor who tries to keep Jim's Latin up to scratch; Miranda Richardson is the woman who tries to be a mother to him. But Jim is outpacing them; soon he is one of the most accomplished men-about- camp. Survivors, we know, often com- mand respect but not admiration. We seldom feel that Jim is in danger; only weaker people seem to be.

We do not know if certain sequences like the air attack on the Japanese base next to the camp — are happening in fact or in the child's imagination. War here has an external landscape and an internal one, and the two intermingle in the perceptions of the central character. But Jim's view- point has its limitations. He does not feel British — 'I've never been there' accepts life as it comes and does not make judgments. The British moan a lot, and lie down and die; the Americans are a cheer- ful crew, enterprising and ingenious. Although in the end Jim rejects their values — 'you taught me that people would do anything for a potato' — one wonders if the film-makers are aware how repellent (and sentimental) their Americans are.

And Jim, of course, is at liberty to admire the Japanese; it may seem to a young boy that there is little to admire in the world he has lost. We may not share his views; we may expect our anger to be aroused. The film-makers are understand- ably anxious to do their bit for internation- al relations, not to mention international box-office receipts. There are constraints, if you are set on having the widest possible audience. Starvation and brutality are diffi- cult to portray if you want to get a 'PG' certificate. There is so much to be done in the name of moral relativism and ready cash. Disney might have gone to Dachau — think of the chances missed. However, you cannot be much enraged by this film. It undoes itself, presenting us, at one point, with a failed but lovable kamikaze pilot. Bathos, in the cinema, is not rare; but here is an instance to savour.