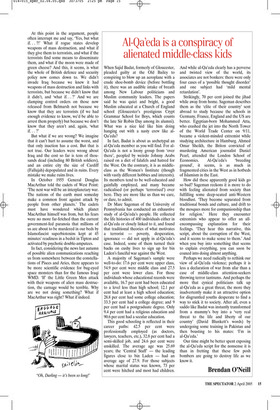 Al-Qa’eda is a conspiracy of alienated middle-class kids

When Sajid Badat, formerly of Gloucester, pleaded guilty at the Old Bailey to conspiring to blow up an aeroplane with a crude shoe-bomb device (before bottling it), there was an audible intake of breath among New Labour politicians and Muslim community leaders. The papers said he was quiet and bright, a good Muslim educated at a Church of England school (Gloucester’s prestigious Crypt Grammar School for Boys, which counts the late Sir Robin Day among its alumni). What was a nice kid like him doing hanging out with a nasty crew like alQa’eda?

In fact, Badat is about as archetypal an al-Qa’eda member as you will find. For alQa’eda is not a loony group from ‘over there’, peopled by weirdo Johnny Arabs raised on a diet of falafels and hatred for the West. On the contrary, it is as middleclass as the Women’s Institute (though with vastly different hobbies and interests). Its members tend to be well-educated and gainfully employed, and many became radicalised (or perhaps ‘terrorised’) over here. They are more like us than we care, or dare, to admit.

Dr Marc Sageman of the University of Pennsylvania has conducted an exhaustive study of al-Qa’eda’s people. He collected the life histories of 400 individuals either in al-Qa’eda or closely linked to it, and found that traditional theories of what motivates a terrorist — poverty, desperation, ignorance — did not apply in al-Qa’eda’s case. Indeed, some of them turned their backs on cushy lives to sign up for bin Laden’s fanciful war against the West.

This good schooling is reflected in their career paths: 42.5 per cent were professionally employed (as doctors, lawyers, teachers, etc.), 32.8 per cent had a semi-skilled job, and 24.6 per cent were unskilled. The average age was 25.69 years; the ‘Central Staff’ — the leading figures close to bin Laden — had an average age of 27.9. For those subjects whose marital status was known, 73 per cent were hitched and most had children. And while al-Qa’eda clearly has a perverse and twisted view of the world, its associates are not bonkers: there were only four cases of a ‘possible thought disorder’ and one subject had ‘mild mental retardation’.

Strikingly, 70 per cent joined the jihad while away from home. Sageman describes them as the ‘elite of their country’ sent abroad to study because the schools in Germany, France, England and the US are better. Egyptian-born Mohammed Atta, who crashed the jet into the North Tower of the World Trade Center on 9/11, became a violent-minded extremist while studying architecture in Hamburg. Ahmed Omar Sheikh, the Briton convicted of murdering American journalist Daniel Pearl, attended the London School of Economics. Al-Qa’eda’s ‘breeding ground’, it seems, is as much in fragmented cities in the West as in hotbeds of Islamism in the East.

How did these apparently good kids go so bad? Sageman reckons it is more to do with feeling alienated from society than fulfilling some deep-seated anti-Western bloodlust. ‘They become separated from traditional bonds and culture, and drift to the mosques more for companionship than for religion.’ Here they encounter extremists who appear to offer an allencompassing explanation for their feelings. ‘They hear this narrative, this script, about the corruption of the West, and it seems to make sense to them.’ And when you buy into something that seems to explain everything, you can soon be coaxed into doing almost anything.

Perhaps we need radically to rethink our view of al-Qa’eda violence; perhaps it is less a declaration of war from afar than a case of middle-class attention-seekers throwing terror tantrums. And perhaps the more that cynical politicians talk up al-Qa’eda as a great threat, the more they inadvertently make it an attractive option for disgruntled youths desperate to find a way to stick it to society. After all, even a saddo like Badat was instantly transformed from a mummy’s boy into a ‘very real threat to the life and liberty of our country’ (David Blunkett’s words) by undergoing some training in Pakistan and then boasting to his mates: ‘I’m in al-Qa’eda.’ Our time might be better spent exposing the al-Qa’eda script for the nonsense it is than in fretting that these few posh bombers are going to destroy life as we know it.