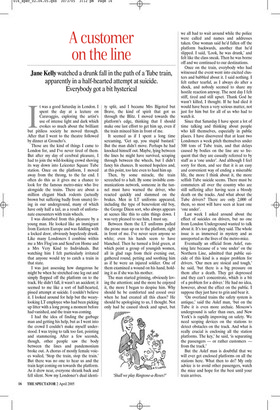 A customer on the line

Jane Kelly watched a drunk fall in the path of a Tube train, apparently in a half-hearted attempt at suicide. Everybody got a bit hysterical It was a good Saturday in London. I spent the day at a lecture on Caravaggio, exploring the artist’s use of intense light and dark which evokes so much about the brilliant but pitiless society he moved through. After that I went to the theatre followed by dinner at Groucho’s.

Those are the kind of things I came to London for, and I’ve never tired of them. But after my day of cerebral pleasure, I had to join the wild-looking crowd shoving its way down into Leicester Square Tube station. Once on the platform, I moved away from the throng, to the far end. I often do this as it gives me a chance to look for the famous metro-mice who live alongside the trains. There are about a million elegant black rodents (actually brown but suffering badly from smuts) living in our underground, many of which have only half a tail, as a result of unfortunate encounters with train wheels.

I was disturbed from this pleasure by a young man. He looked like an immigrant from Eastern Europe and was fiddling with a locked door, obviously hopelessly drunk. Like many Londoners I combine within me a Mrs Flog’em and Send’em Home and a Mrs Very Kind to Individuals. But watching him I felt particularly irritated that anyone would try to catch a train in that state.

I was just assessing how dangerous he might be when he stretched one leg out and simply flopped off the platform on to the track. He didn’t fall, it wasn’t an accident; it seemed to me like a sort of half-hearted, pissed attempt at suicide. I couldn’t believe it. I looked around for help but the wearylooking LT employee who had been picking up litter with a long prong a moment before had vanished, and the train was coming.

I had the idea of finding the garbage man and getting his help, but as I went into the crowd I couldn’t make myself understood. I was trying to talk too fast, pointing and stammering. After a few seconds, though, other people saw the body between the lines and pandemonium broke out. A chorus of mostly female voices wailed, ‘Stop the train, stop the train.’ But there was no one to hear us and the train kept coming on towards the platform. As it drew near, everyone shrank back and fell silent. Now my Londoner’s dual identi ty split, and I became Mrs Bigoted but Brave, the kind of spirit that got us through the Blitz. I moved towards the platform’s edge, thinking that I should make one last effort to get him up, even if the train minced him in front of me.

It seemed as if I spent a long time screaming, ‘Get up, you stupid bastard.’ But the man didn’t move. Perhaps he had knocked himself out. Maybe, lying between the lines he might have survived, scraping through between the wheels, but I didn’t fancy his chances. It seemed hopeless and, at this point, too late even to haul him up.

Then, by some miracle, the train screeched to a halt. By some invisible communications network, someone in the tunnel must have warned the driver, who reacted quickly and slammed on the brakes. Men in LT uniforms appeared, including the type of benevolent old boy, the George Dixon sort, who always appears at scenes like this to calm things down. I was very pleased to see him, I must say.

Between them the LT uniforms pulled the prone man up on to the platform, right in front of me. I’ve never seen anyone so white; even his hands seem to have blanched. Then he turned a livid green, at which point a group of youngish women, all in glad rags from their evening out, gathered round, petting and soothing him as if he were an injured soldier. One of them examined a wound on his hand, holding it as if she was his mother.

The man started grinning, obviously loving the attention; and the more he enjoyed it, the more I began to despise him. Why should he be comforted and cooed over when he had created all this chaos? He should be apologising to us, I thought. Not only had he caused shock and upset, but we all had to wait around while the police were called and names and addresses taken. One woman said he’d fallen off the platform backwards, another that he’d slipped. I said, ‘Look, he was drunk,’ and felt like the class sneak. Then he was borne off and we continued to our destinations.

Once on the train, everybody who had witnessed the event went into excited clusters and babbled about it. I said nothing. I felt rather tearful, as I always do after a shock, and nobody seemed to share my hostile reaction anyway. The next day I felt stiff, tired and still upset. Thank God he wasn’t killed, I thought. If he had died it would have been a very serious matter, not just for him but for all of us who had to watch it.

Since that Saturday I have spent a lot of time talking and thinking about people who kill themselves, especially in public places. I have discovered that at least two Londoners a week pitch themselves under 500 tons of Tube train, and that delays caused by bodies on the line are so frequent that they are casually referred to by staff as a ‘one under’. And although I feel sorry for them, and see that it is an easy and convenient way of ending a miserable life, the more I think about it, the more selfish Tube suicide seems. There must be commuters all over the country who are still suffering after having seen a bloody death on the tracks. And what about the Tube drivers? There are only 2,000 of them, so most will have seen at least one ‘one under’.

Last week I asked around about the effect of suicides on drivers, but no one from London Underground wanted to talk about it. It’s too grisly, they said. The whole issue is as immersed in mystery and as unreported as the lives of the metro-mice.

Eventually an official from Aslef, running late because of a ‘one under’ on the Northern Line, admitted that public suicide of this kind is a major problem for drivers. ‘Our men are stoical and tough,’ he said, ‘but there is a big pressure on them after a death. They get depressed and they can’t concentrate, which is a bit of a problem for a driver.’ He had no idea, however, about the effect on the public. I suppose they just have to grin and bear it.

‘On overland trains the safety system is antique,’ said the Aslef man, ‘but on the Tube it is even more archaic. Moscow’s underground is safer than ours, and New York’s is rapidly improving on safety. We need scoping devices on the stations to detect obstacles on the track. And what is really crucial is enclosing all the station platforms. The key,’ he said, ‘is separating the passengers — or rather customers from the track.’ But the Aslef man is doubtful that we will ever get enclosed platforms on all the stations here. What then to do? My only advice is to avoid other passengers, watch the mice and hope for the best until your train arrives.