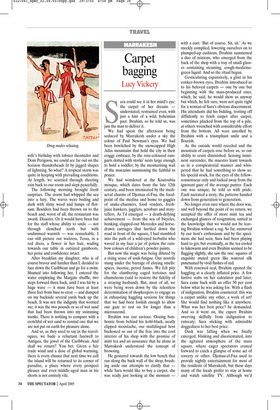 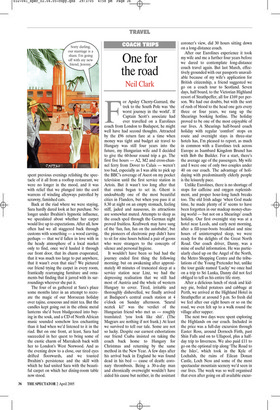 Sara could see it in her mind’s eye: the carpet of her dreams understated, restrained even, with just a hint of a wild, bohemian past. Ibrahim, so he told us, was just the man to deliver it.

We had spent the afternoon being seduced by Marrakesh under a sky the colour of Paul Newman’s eyes. We had been bewitched by the snowcapped High Atlas mountains that hold the city in their craggy embrace; by the rose-coloured ramparts dotted with storks’ nests large enough to hold a toddler; by the mesmerising wail of the muezzins summoning the faithful to prayer.

We had wondered at the Koutoubia mosque, which dates from the late 12th century, and been intoxicated by the mediaeval charms of Djemaa el-Fna, the focalpoint of the medina and home to gaggles of snake-charmers, food vendors, freshjuice hawkers, jugglers, acrobats and storytellers. As I’d emerged — a death-defying achievement — from the sea of bicycles, honking, clapped-out Mercedes and horsedrawn carriages that hurtled down the road in front of the square, I had stumbled into the path of a wild-eyed herbalist who waved in my face a jar of potion the rainbow colours of children’s powder paints.

But now the magic was being diluted by a rising sense of souk-fatigue. Our nostrils stung under the barrage of cloying smells: spices, incense, petrol fumes. We felt pity for the clambering caged tortoises and chameleons (said to restore the fidelity of a straying husband). But, most of all, we were being worn down by the relentless determination of shopkeepers to engage us in exhausting haggling sessions for things that we had been foolish enough to allow our gaze to rest on for longer than a microsecond.

Ibrahim was our saviour. Oozing bonhomie from behind his kohl-black, neatly clipped moustache, our multilingual host beckoned us out of the fray into the cool interior of his shop with the promise of mint tea and an assurance that he alone in Marrakesh understood the concept of browsing.

He gestured towards the low bench that ran along the back wall of the shop, brushing aside our attempts to clarify that while Sara would like to buy a carpet, she was really just looking at the moment — with a curt: ‘But of course. Sit, sit.’ As we meekly complied, lowering ourselves on to plumped-up cushions, Ibrahim summoned a duo of minions, who emerged from the back of the shop with a tray of small glasses containing steaming, cough-medicinegreen liquid. And so the ritual began.

Gesticulating expansively, a glint in his conker-brown eyes, Ibrahim introduced us to his beloved carpets — one by one but beginning with the mass-produced ones, which, he said, he would show us anyway but which, he felt sure, were not quite right for a woman of Sara’s obvious discernment. His attendants did his bidding, trotting off diffidently to fetch carpet after carpet, sometimes plucked from the top of a pile, at others wrenched with considerable effort from the bottom. All were unrolled by Ibrahim with a triumphant smile and a flourish.

As the outside world receded and the mountain of carpets rose before us, so our ability to resist diminished. Sensing imminent surrender, the maestro leant towards us in a conspiratorial manner and whispered that he had something to show us: his special stock, for the eyes of the fellowconnoisseur only and locked away from the ignorant gaze of the average punter. Each one was unique, he told us with pride. Each narrated a story, the patterns handed down from generation to generation.

No longer even sure where the door was, and well beyond the point of no return, we accepted the offer of more mint tea and exchanged glances of resignation, united in the knowledge that we would not be leaving Ibrahim without a rug. So far, unmoved by our host’s enthusiasm and by the specimens she had seen, Sara had been playing hard to get, but eventually, as the tea cooled to lukewarm and even Ibrahim seemed to be flagging slightly, she saw the one: squares of exquisite muted green like watered silk punctuated by vivid flashes of red.

With renewed zeal, Ibrahim opened the haggling at a clearly inflated price. A few furtive stabs on her calculator pad later, Sara came back with an offer 50 per cent below what he was asking for. With a flash of indignation, Ibrahim countered: this was a carpet unlike any other, a work of art! She would find nothing like it anywhere. What was her best price? he demanded. And so it went on, the expert Ibrahim swerving skilfully from indignation to entreaty; Sara sticking with admirable doggedness to her best price.

Dusk was falling when we finally emerged, blinking and disorientated, into the agitated atmosphere of the main square, where eager spectators craned forward to catch a glimpse of some act of sorcery or other. Djemaa-el-Fna used to provide nightly entertainment for most of the residents of Marrakesh, but these days many of the locals prefer to stay at home and watch satellite TV. Although we’d spent previous evenings relishing the spectacle of it all from a rooftop restaurant, we were no longer in the mood, and it was with relief that we plunged into the cool warrens of winding alleyways patrolled by scrawny, famished cats.

Back at the riad where we were staying, Sara hardly dared look at her purchase. No longer under Ibrahim’s hypnotic influence, we speculated about whether her carpet would live up to expectations. After all, how often had we all staggered back through customs with something — a wood carving, perhaps — that we’d fallen in love with in the heady atmosphere of a local market only to find, once we’d hauled it through our front door, that its charm evaporated, that it was much too large to put anywhere, that it wasn’t even that nice? We pictured our friend trying the carpet in every room, frantically rearranging furniture and ornaments but finding that it jarred with its surroundings wherever she put it.

The four of us gathered at Sara’s place some months later in an attempt to recreate the magic of our Moroccan holiday over tajine, couscous and mint tea. But the candles kept going out in the ethnic metal lanterns she’d been bludgeoned into buying in the souk, and a CD of North African music sounded somehow less enchanting than it had when we’d listened to it in the riad. But on one front, at least, Sara had succeeded in her quest to bring some of the exotic charm of Marrakesh back with her to London’s West Norwood. And as the evening drew to a close, our tired eyes drifted floorwards, and we toasted Ibrahim’s persistence and the skill with which he had united Sara with the beautiful carpet on which her dining-room table now stood.