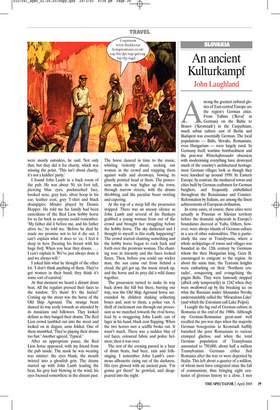 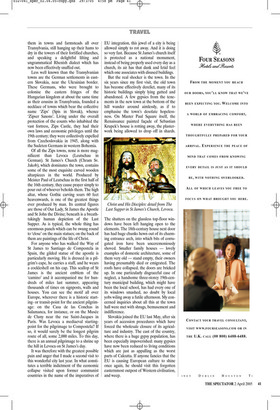 Among the greatest cultural glories of East-central Europe are the region’s German cities. From Tallinn (‘Reval’ in German) on the Baltic to Brasov (‘Kronstadt’) in the Carpathians, much urban culture east of Berlin and Budapest was essentially German. The local populations — Balts, Slovaks, Romanians, even Hungarians — were largely rural. In Germany itself, wartime bombardment and the post-war Wirtschaftswunder obsession with modernising everything have destroyed much of the country’s architectural heritage: most German villages look as though they were knocked up around 1950. In Eastern Europe, by contrast, the mediaeval towns and cities built by German craftsmen for German burghers, and frequently embellished throughout the Renaissance and CounterReformation by Italians, are among the finest achievements of European civilisation.

In some cases, of course, these cities were actually in Prussian or Silesian territory before the dramatic upheavals in Europe’s boundaries decreed at Yalta. Others, however, were always islands of German culture in a sea of other nationalities. This is particularly the case in Translyvania, where a whole archipelago of towns and villages was founded in the 12th century by Germans whom the then Hungarian king, Geza II, encouraged to emigrate to the region. At about the same time, the Teutonic knights were embarking on their ‘Northern crusades’, conquering and evangelising the pagan Balts. They were famously stopped (albeit only temporarily) in 1242 when they were swallowed up by the breaking ice on what the Russians under Alexander Nevsky understandably called the ‘Miraculous Lake’ (and which the Estonians call Lake Peipsi).

I caught the fag end of German culture in Romania at the end of the 1980s. Although my German-Romanian great-aunt well recalled the pre-war days when the majority German bourgeoisie in Kronstadt huffily banished the poor Romanians to various cramped ghettos, and when the total German population of Transylvania amounted to 750,000, about half a million Transylvanian Germans either fled Romania after the war or were deported by Stalin. This left about a quarter of a million, of whom most have emigrated since the fall of communism, thus bringing eight centuries of glorious history to a close. I met them in towns and farmsteads all over Transylvania, still hanging up their hams to dry in the towers of their fortified churches, and speaking a delightful lilting and ungrammatical Rhenish dialect which has now been effectively snuffed out.

Less well known than the Transylvanian towns are the German settlements in eastern Slovakia, near the Ukrainian border. These Germans, who were brought to colonise the eastern fringes of the Hungarian kingdom at about the same time as their cousins in Transylvania, founded a necklace of towns which bear the collective name ‘Zips’ (Spis in Slovak), whence ‘Zipser Saxons’. Living under the overall protection of the counts who inhabited the vast fortress, Zips Castle, they had their own laws and economic privileges until the 19th century; they were collectively expelled from Czechoslovakia in 1945, along with the Sudeten Germans in western Bohemia.

Of all the Zips towns, none is more magnificent than Levoca (Leutschau in German). St James’s Church (Chram Sv. Jakob), which dominates the town, contains some of the most exquisite carved wooden altarpieces in the world. Produced by Meister Paul of Leutschau in the first half of the 16th century, they cause prayer simply to pour out of whoever beholds them. The high altar, whose Gothic carving soars 60 feet heavenwards, is one of the greatest things ever produced by man. Its central figures are those of Our Lady, St James the Apostle and St John the Divine; beneath is a breathtakingly human depiction of the Last Supper. As is typical, the whole thing has enormous panels which can be swung round to ‘close’ on the main statues; on the back of them are paintings of the life of Christ.

For anyone who has walked the Way of St James to Santiago de Compostela in Spain, the gilded statue of the apostle is particularly moving. He is dressed in a pilgrim’s cape, he carries a staff, and he wears a cockleshell on his cap. This scallop of St James is the ancient emblem of the ‘camino’ and it accompanied me for hundreds of miles last summer, appearing thousands of times on signposts, walls and houses. You can see the motif all over Europe, wherever there is a historic startingor transit-point for the ancient pilgrimage: on the Casa de las Conchas in Salamanca, for instance, or on the Musée de Cluny near the rue Saint-Jacques in Paris. Was Levoca a mediaeval startingpoint for the pilgrimage to Compostela? If so, it would surely be the longest pilgrim route of all, some 2,000 miles. To this day, there is an annual pilgrimage to a shrine up the hill in Levoca on St James’s day.

It was therefore with the greatest possible pain and anger that I made a second visit to this wonderful city last year. In what constitutes a terrible indictment of the economic collapse visited upon former communist countries in the name of the imperatives of EU integration, this jewel of a city is being allowed simply to rot away. And it is doing so very fast. Because St James’s church itself is protected as a national monument, instead of being properly used every day as a church, its air has that dank and fetid feel which one associates with disused buildings.

But the real shocker is the town. In the six years since my first visit, the old town has become effectively derelict, many of its historic buildings simply lying gutted and abandoned. A few gypsies from the tenements in the new town at the bottom of the hill wander around aimlessly, as if to emphasise the town’s desolate hopelessness. On Master Paul Square itself, the Renaissance painted façade of Sebastian Krupek’s house is rotting away, the plasterwork being allowed to drop off in shards.

The shutters on the glassless top-floor windows have been left hanging open to the elements. The 18th-century house next door has had huge chunks hewn out of its charming entrance arch, into which bits of corrugated iron have been unceremoniously shoved. Smaller family houses — lovely examples of domestic architecture, some of them very old — stand empty, their owners having presumably died or emigrated. The roofs have collapsed, the doors are bricked up. In one particularly disgraceful case of neglect, a handsome three-storey 19th-century municipal building, which might have been the local school, has had every one of its windows smashed, no doubt by local yobs wiling away a futile afternoon. My concerned inquiries about all this at the town hall were met with shrugs, bemusement and indifference.

Slovakia joined the EU last May, after six years of accession procedures which have forced the wholesale closure of its agriculture and industry. The east of the country, where there is a huge gypsy population, has been especially impoverished: many gypsies have now been reduced to living conditions which are just as appalling as the worst parts of Calcutta. If anyone fancies that the EU is causing European culture to shine once again, he should visit this forgotten easternmost outpost of Western civilisation, and weep.