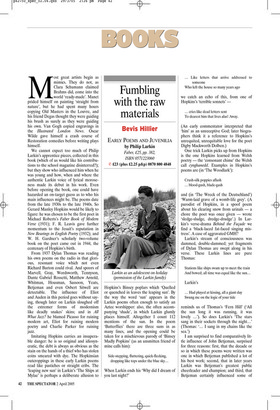 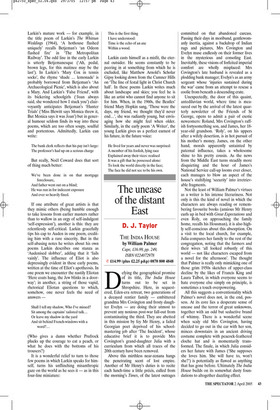 Fumbling with the raw materials

Most great artists begin as mimics. They do not, as Clara Schumann claimed Brahms did, come into the world ‘ready-made’. Manet prided himself on painting ‘straight from nature’, but he had spent many hours copying Old Masters in the Louvre, and his friend Degas thought they were guiding his brush as surely as they were guiding his own. Van Gogh copied engravings in the Illustrated London News. Oscar Wilde gave himself a crash course of Restoration comedies before writing plays himself.

We cannot expect too much of Philip Larkin’s apprentice pieces, collected in this book (which of us would like his contributions to the school magazine disinterred?); but they show who influenced him when he was young and how, when and where the authentic Larkin voice of lyrical moroseness made its debut in his work. Even before opening the book, one could have hazarded an on-target guess as to who his main influences might be. The poems date from the late 1930s to the late 1940s. So Gerard Manley Hopkins would be likely to figure: he was chosen to be the first poet in Michael Roberts’s Faber Book of Modern Verse (1931); F. R. Leavis gave further momentum to the Jesuit’s reputation in New Bearings in English Poetry (1932); and W. H. Gardner’s scholarly two-volume book on the poet came out in 1944, the centenary of Hopkins’s birth.

From 1937 Dylan Thomas was reading his own poems on the radio in that glorious, resonant voice which not even Richard Burton could rival. And spoors of Marvell, Gray, Wordsworth, Tennyson, Dante Gabriel Rossetti, Matthew Arnold, Whitman, Housman, Sassoon, Yeats, Betjeman and even Osbert Sitwell are detectable. The influence of Eliot and Auden in this period goes without saying, though later on Larkin sloughed off the extremer forms of modernism like deadly snakes’ skins; and in All What Jazz? he blamed Picasso for ruining modern art, Eliot for ruining modern poetry and Charlie Parker for ruining jazz.

Imitating Hopkins carries an insuperable danger: he is so original and idiosyncratic, the debt is always as obvious as the stain on the hands of a thief who has stolen coins smeared with dye. The Hopkinsian outcroppings in these early Larkin poems read like pastiches or straight cribs. The ‘leaping new sun’ in Larkin’s ‘The Ships at Mylae’ is perhaps a deliberate allusion to Hopkins’s Binsey poplars which ‘Quelled or quenched in leaves the leaping sun’. By the way the word ‘sun’ appears in the Larkin poems often enough to satisfy an Aztec worshipper: also, the often accompanying ‘shade’, in which Larkin glumly places himself. Altogether I count 112 mentions of the sun. In the poem ‘Butterflies’ there are three suns in as many lines, and the opening could be taken for a mischievous parody of ‘Binsey Madly Popkins’ (as an unsmitten friend of mine calls him):

Side-stepping, fluttering, quick-flecking, dropping like tops under the blue sky...

When Larkin ends his ‘Why did I dream of you last night?’

... Like letters that arrive addressed to someone Who left the house so many years ago

we catch an echo of this, from one of Hopkins’s ‘terrible sonnets’ —

... cries like dead letters sent To dearest him that lives alas! Away.

(An early commentator interpreted that ‘him’ as an unreceptive God; later biographers think it a reference to Hopkins’s unrequited, unrequitable love for the poet Digby Mackworth Dolben.) One trick Larkin picks up from Hopkins is the one Hopkins learned from Welsh poetry — the ‘consonant chime’ the Welsh call cynghanedd. Examples in Hopkins’s poems are (in ‘The Woodlark’):

and (in ‘The Wreck of the Deutschland’) ‘Warm-laid grave of a womb-life grey’. (A parodist of Hopkins, in a spoof poem about his clearing snow from urinals — a chore the poet was once given — wrote ‘sledge-sludge, dredge-drudge’.) In Larkin’s verse-drama Behind the Façade we find a ‘black-laced fat-faced singing mistress’. A case of aggravated GMH?

Larkin’s stream of consciousness was dammed, double-dammed; yet fragments of Dylan Thomas are swept along in his verse. These Larkin lines are pure Thomas:

Stations like ships swam up to meet the train And bowed; all time was equal like the sun...

... Had played at kissing, all a giant day Swung me on the logic of your tide

reminds us of Thomas’s ‘Fern Hill’ (‘All the sun long it was running, it was lovely ...’). So does Larkin’s ‘The stars sang in their sockets through the night...’ (Thomas: ‘... I sang in my chains like the sea.’) I am surprised to find comparatively little influence of John Betjeman, surprised for three reasons: first, that the decade or so in which these poems were written was one in which Betjeman published a lot of his best work; second, that in later years Larkin was Betjeman’s greatest public cheerleader and champion; and third, that Betjeman certainly influenced some of Larkin’s mature work — for example, in the title poem of Larkin’s The Whitsun Weddings (1964), ‘A hothouse flashed uniquely’ recalls Betjeman’s ‘an Odeon flashed fire’ in ‘The Metropolitan Railway’. The odd line in the early Larkin is utterly Betjemanesque (‘Ah, pedal, brown legs, for this matinee may be the last’). In Larkin’s ‘Mary Cox in tennis socks’, the rhyme ‘shade ... lemonade’ is probably borrowed from Betjeman’s ‘An Archaeological Picnic’, which is also about a Mary. And Larkin’s ‘False Friend’, with its bickering schoolgirls (‘Joan always said, she wondered how I stuck you’) clairvoyantly anticipates Betjeman’s ‘Hunter Trials’ (‘Miss Blewitt says Monica threw it, But Monica says it was Joan’) but in general humour seldom finds its way into these poems, which are too often soupy, soulful and portentous. Admittedly, Larkin can write:

The bank clerk reflects that his pay isn’t large: The professor’s had up on a serious charge

But really, Noël Coward does that sort of thing much better:

We’ve been done in on that mortgage foreclosure, And father went out on a blind; He was run in for indecent exposure And ever so heavily fined.

If one attribute of great artists is that they mimic others (being humble enough to take lessons from earlier masters rather than to wallow in an orgy of self-indulgent ‘self-expression’), another is this: they are relentlessly self-critical. Larkin gracefully tips his cap to Auden in one poem, crediting him with a rare sincerity. But in the self-abasing notes he writes about his own poems Larkin describes one stanza as ‘Audenised slobber’, adding that it ‘fails vainly’. The influence of Eliot is also depressingly evident in these early poems, written at the time of Eliot’s apotheosis. In one poem we encounter the nastily Eliotan ‘Here coats hang, the Jew blinks in a doorway’; in another, a string of those vapid, rhetorical Eliotan questions to which, somehow, one never feels the need of answers —

Shall I tell my shadow, Who I’ve missed? Sit among the captains’ tailored talk... Or leave my shadow in the yard And sit behind French-windows with a word?...

(Who gives a damn whether Prufrock plucks up the courage to eat a peach, or what he does with the bottoms of his trousers?) It is a wonderful relief to turn to those few poems in which Larkin speaks for himself, turns his unflinching misanthropic gaze on the world as he sees it — as in this four-line miniature:

This is the first thing I have understood: Time is the echo of an axe Within a wood.

Larkin casts himself as a misfit, the eternal outsider. He seems constantly to be peering in at something from which he is excluded, like Matthew Arnold’s Scholar Gipsy looking down from the Cumner Hills on ‘The line of festal light in Christ Church hall’. In these poems Larkin writes much about landscape and skies; you feel he is like an artist who cannot find anyone to sit for him. When, in the 1960s, the Beatles’ friend Mary Hopkin sang, ‘Those were the days, my friend, we thought they’d never end...’, she was radiantly young, but envisaging how she might feel when older. Similarly, in the early poem ‘A Writer’, the young Larkin gives us a perfect earnest of his future, in the future voice:

He lived for years and never was surprised: A member of his foolish, lying race Explained away their vices: realised It was a gift that he possessed alone: To look the world directly in the face; The face he did not see to be his own.