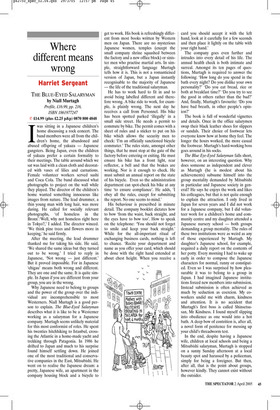 THE BLUE-EYED SALARYMAN by Niall Murtagh Profile, £16.99, pp. 216, ISBN 1861977247 ✆ £14.99 (plus £2.25 p&p) 0870 800 4848 Iwas sitting in a Japanese children’s home discussing a rock concert. The band members were all from the children’s home, the abandoned and abused offspring of yakuza — Japanese gangsters. Being Japan, even the children of yakuza prefer a certain formality to their meetings. The table around which we sat was laid with a clean cloth and decorated with vases of lilies and carnations. Female volunteer workers served sushi and Coca Cola. The band discussed what photographs to project on the wall while they played. The director of the children’s home wanted something innocuous like images from nature. The lead drummer, a thin young man with long hair, was more daring. He called for socially relevant photographs, ‘of homeless in the Bronx’.‘Well, why not homeless right here in Tokyo?,’ I added. The director winced. ‘We think pine trees and flowers more in keeping,’ he said firmly.

After the meeting, the lead drummer thanked me for taking his side. He said, ‘We shared the same ideas but they turned out to be wrong.’ I tried to reply in Japanese, ‘Not wrong — just different.’ But it proved impossible. For in Japanese ‘chigau’ means both wrong and different. They are one and the same. It is quite simple. In Japan if you are different from your group, you are in the wrong.

Why Japanese need to belong to groups and the power of the group over the individual are incomprehensible to most Westerners. Niall Murtagh is a good person to explain. The Blue-Eyed Salaryman describes what it is like to be a Westerner working as a salaryman for a Japanese company. Murtagh seems unlikely material for this most conformist of roles. He spent his twenties hitchhiking to Istanbul, crossing the Atlantic in a home-made yacht and trekking through Patagonia. In 1986 he drifted to Japan and much to his surprise found himself settling down. He joined one of the most traditional and conservative companies in the East, Mitsubishi. He went on to realise the Japanese dream: a pretty, Japanese wife, an apartment in the company housing block and a bicycle to get to work. His book is refreshingly different from most books written by Western men on Japan. There are no mysterious Japanese women, temples (except the small company shrine squashed between the factory and a new office block) or sinister men who practise martial arts. In simple, straightforward language Murtagh tells how it is. This is not a romanticised version of Japan, but a Japan instantly recognisable to the majority of Japanese — the life of the traditional salaryman.

He has to work hard to fit in and to avoid being labelled different and therefore wrong. A bike ride to work, for example, is plainly wrong. The next day he receives a call from Personnel. His bike has been spotted parked ‘illegally’ in a small side street. He needs a permit to commute by bike. The permit comes with a sheet of rules and a sticker to put on his bike which allows the security men to check: ‘I’m an officially sanctioned bicycle commuter.’ The rules state, amongst other things, that he must stop at the gate of the factory before entering or exiting. He must ensure his bike has a front light, rear reflector, a bell and that the brakes are working. Nor is it enough to check. He must submit an annual report on the state of his bicycle. Even so the administration department can spot-check his bike at any time ‘to ensure compliance’. He adds, ‘I obey all the rules, except for submitting the report. No one seems to mind.’ His behaviour is prescribed in minute detail. The company booklet dictates how to bow ‘from the waist, back straight, and the eyes have to bow too’. How to speak on the telephone: ‘You should not forget to smile and keep your back straight.’ While for the all-important ritual of exchanging business cards, nothing is left to chance. ‘Recite your department and name as you offer your card, which should be done with the right hand extended at about chest height. When you receive a card you should accept it with the left hand, look at it carefully for a few seconds and then place it lightly on the table with your right hand.’ The company goes even further and intrudes into every detail of his life. The annual health check is both intimate and surreal. Amongst its ten pages of questions, Murtagh is required to answer the following: ‘How long do you spend in the bath every night? Do you dislike your own personality?’ ‘Do you eat bread, rice or both at breakfast time?’ ‘Do you try to see the good in others rather than the bad?’ And, finally, Murtagh’s favourite: ‘Do you have bad breath, in other people’s opinion?’ The book is full of wonderful vignettes and details. Once in the office salarymen swap their black leather shoes for slippers or sandals. Their choice of footwear lets everyone know how at home they feel. The longer the hours worked, the more casual the footwear. Murtagh’s hard-working boss goes around in his socks.

The Blue Eye-Eyed Salaryman falls short, however, on an interesting question. Why does someone as independent and clever as Murtagh (he is modest about his achievements) subsume himself into the group mentality demanded by Mitsubishi in particular and Japanese society in general? He says he enjoys the work and likes his colleagues, but that is not quite enough to explain the attraction. I only lived in Japan for seven years and I did not work for a Japanese company, but I did volunteer work for a children’s home and community centre and my daughter attended a Japanese nursery school — both groups demanding a group mentality. The rules of these two institutions were as weird as any of those experienced by Murtagh. My daughter’s Japanese school, for example, required a daily report on the contents of her potty. Every morning I had to wake up early in order to compose the Japanese characters for normal, runny or constipated. Even so I was surprised by how pleasurable it was to belong to a group in Japan. I had imagined Japanese institutions forced new members into submission. Instead submission is often achieved as much by seduction as coercion. My coworkers undid me with charm, kindness and attention. It is no accident that Murtagh’s first boss is called Shinsetsusan, Mr Kindness. I found myself slipping into obedience as one would into a hot bath. A deep bow of contrition is, after all, a novel form of penitence for messing up your child’s threadworm test.

In the end, despite having a Japanese wife, children at local schools and being a Mitsubishi salaryman, Murtagh is stopped on a sunny Sunday afternoon at a local beauty spot and harassed by a policeman, simply for being a foreigner. But then, after all, that is the point about groups, however kindly. They cannot exist without the outsider.