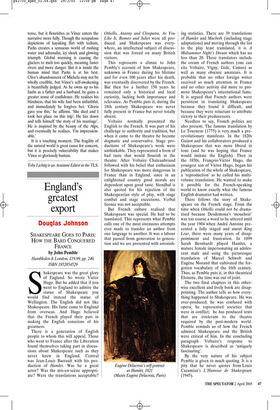 SHAKESPEARE GOES TO PARIS: HOW THE BARD CONQUERED FRANCE by John Pemble Hambleden & London, £19.99, pp. 240, ISBN 1852854529 Shakespeare was the great glory of England. So wrote Victor Hugo. But he added that if you went to England to admire the statue of Shakespeare you would find instead the statue of Wellington. The English did not like Shakespeare. His fame came to England from overseas. And Hugo believed that the French played their part in making the English conscious of his greatness.

There is a generation of English people to whom this will appeal. Those who went to France after the Liberation found themselves taking part in discussions about Shakespeare such as they never knew in England. Central was Jean-Louis Barrault with his production of Hamlet. Was he a great actor? Was the mis-en-scène appropriate? Were the translations acceptable? Othello, Antony and Cleopatra, As You Like It, Romeo and Juliet were all produced, and Shakespeare was everywhere, an intellectual subject of discussion that was forced on many British visitors.

This represents a climax to John Pemble’s account of how Shakespeare, unknown in France during his lifetime and for even 100 years after his death, was eventually discovered by the French. But then for a further 150 years he remained only a historical and local curiosity, lacking both importance and relevance. As Pemble puts it, during the 18th century Shakespeare was never fully present in France but never totally absent.

Voltaire normally presented the English to the French. It was part of his challenge to authority and tradition, but when it came to the theatre he became dogmatic and conservative. Stage productions of Shakespeare’s work were unthinkable. They represented a form of bad taste that would flourish in the theatre. After Voltaire Chateaubriand followed with his belief that enthusiasm for Shakespeare was more dangerous in France than in England, since in an enlightened country good morals are dependent upon good taste. Stendhal is also quoted for his rejection of the Shakespearian style of play, with stage combat and stage executions. Verbal licence was not acceptable.

But French culture realised that Shakespeare was special. He had to be translated. This represents what Pemble calls one of the most strenuous attempts ever made to transfer an author from one language to another. It was a labour that passed from generation to generation and we are presented with astonish ing statistics. There are 39 translations of Hamlet and Macbeth (including stage adaptations) and moving through the list to the play least translated, it is A Midsummer Night’s Dream which has no less than 20. These translators include the cream of French authors (one can cite Voltaire, Vigny, Gide, Camus) as well as many obscure amateurs. It is probable that no other foreign writer received so much attention in France and no other activity did more to promote Shakespeare’s international fame. It is argued that French authors were persistent in translating Shakespeare because they found it difficult, and because they were reluctant to attribute victory to their predecessors.

Needless to say, French politics are also present. The famous translation by Le Tourneur (1775) is very much a prerevolutionary manifesto. In the 1820s Guizot and his collaborators produced a Shakespeare that was more liberal in tone (and he was hoping that France would imitate the English). Then in the 1850s, François-Victor Hugo, the youngest son of Victor Hugo, began his publication of the whole of Shakespeare, a ‘reproduction’ as he called his multivolume translation. He wanted to make it possible for the French-speaking world to know exactly what the famous English dramatist had written.

There follows the story of Shakespeare on the French stage. From the time when Othello could not be dramatised because Desdemona’s ‘mouchoir’ was too coarse a word to be uttered until the year 1904 when André Antoine presented a fully staged and uncut King Lear, there were many years of disappointment and frustration. In 1899 Sarah Bernhardt played Hamlet, a mature female impersonating an adolescent male and using the picturesque translation of Marcel Schwob and Eugène Morand that cultivated the forgotten vocabulary of the 16th century. Thus, as Pemble puts it, in this theatrical Elsinore, the time was out of joint.

The two final chapters in this otherwise excellent and lively book are disappointing. The author tells us how everything happened to Shakespeare. He was over-produced; he was confused with opera; he represented societies that were in conflict; he has produced texts that are irrelevant to the theatre required by the post-modern world. Pemble reminds us of how the French admired Shakespeare and the British were critical of him. In the concluding paragraph Voltaire’s response to Shakespeare is described as ‘uniquely fascinating’.

By the very nature of his subject Pemble is given to much quoting. It is a pity that he never quotes from Louis Cazamian’s L’Humour de Shakespeare (1945).