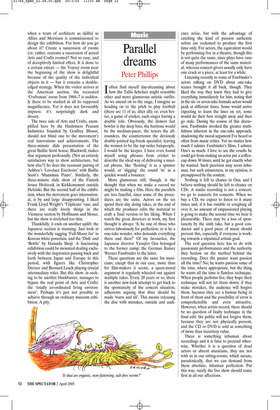 Ioften find myself day-dreaming about how the Tallis Scholars might resemble other and more glamorous artistic outfits. As we uncurl on to the stage, I imagine us heading on to the pitch to play football (there are 11 of us, after all); or, even better, a game of cricket, each singer having a double role. Obviously, the demon fast bowler is the deep bass, the baritone would be the medium-pacer, the tenors the allrounders, the countertenor the deviously double-jointed leg-break specialist, leaving the women to be the top order batspeople. I would be the keeper. I have even found myself using phrases from cricket to describe the ideal way of delivering a musical phrase, like ‘floating’ it as a spinner would, or ‘digging’ the sound ‘in’ as a quickie would a bouncer.

More glamorous still, though, is the thought that when we make a record we might be making a film. Here the parallels are less fanciful, since some of the procedures are the same. Actors on the set spend their day doing takes, at the end of which the producer edits the material to craft a final version to his liking. When I watch the great directors at work, my first thought is always: ‘Is he one of those who strives laboriously for perfection; or is he a one-take wonder, who demands everything there and then?’ Of my favourites, the Japanese director Yasujiro Ozu belonged to the former camp; the German Rainer Werner Fassbinder to the latter.

These questions are the same for musicians, except that in our case, more than for film-makers it seems, a quasi-moral argument is regularly wheeled out against multiple takes. Every 20 years or so, there is another new-look attempt to get back to the spontaneity of the concert situation, adherents arguing that discs should be made ‘warts and all’. This means releasing the disc with mistakes, outside and audi ence noise, but with the advantage of catching the kind of passion authentic artists are reckoned to produce the first time only. For actors, the equivalent would be performing live in a theatre, though this is not quite the same, since plays have runs of many performances of the same material, whereas concert-givers usually only have one crack at a piece, at least for a while.

Listening recently to some of Fassbinder’s actors talking on DVD about one-take scenes brought it all back, though. They liked the way they knew they had to give everything immediately for him, noting that in the sixor seven-take formula actors would peak at different times. Some would arrive expecting to learn the lines on set, some would do their best straight away and then go stale. During the course of this discussion, Fassbinder invoked the greater truthfulness inherent in the one-take approach, shadowing the moral argument I’ve heard so often from music critics. Yet no matter how much I admire Fassbinder’s films, I admire Ozu’s as much. I love to see the results he could get from making an actor put a coffeecup down 30 times, until he got exactly what he wanted. Such precision may seem inhuman, but such minuteness, in my opinion, is presupposed by the context.

Nothing is left to chance in Ozu, and I believe nothing should be left to chance on CDs. A studio recording is not a concert: we go to concerts for concerts. When we buy a CD, we expect to listen to it many times and, if it has rumble or coughing all over it, no amount of empassioned playing is going to make the second time we hear it pleasurable. There may be a loss of spontaneity by the sixth take, but a good conductor and a good piece of music should prevent this, especially if everyone is working towards a stipulated artistic goal.

The real question here has to do with passionate performances and the authority they bestow on the method behind the recording. Does the punter want passion all the time? No; he wants passion some of the time, where appropriate, but the thing he wants all the time is flawless technique. When people perform live, they hope their technique will not let them down; if they make mistakes, the audience will forgive them, because they see a human being in front of them and the possibility of error is comprehensible and even attractive. However, when artists record, there should be no question of faulty technique in the final edit: the public will not forgive them, because they are not physically present, and the CD or DVD is sold as something of more than transitory value.

There is something inhuman about recordings and it is false to pretend otherwise. Whether it is a question of dead actors or absent musicians, they are not with us in our sitting-rooms, which means, paradoxically, that we can demand from them absolute, inhuman perfection. Put this way, surely the live show should come first in all our affections.