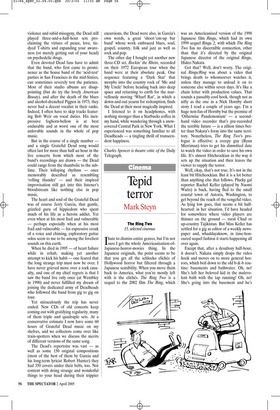 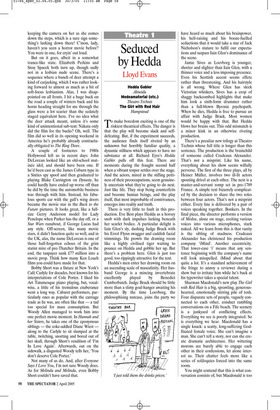 Ihate to dismiss entire genres, but I’m not sure I get the whole Americanisation-ofJapanese-horror-movies thing. In the Japanese originals, the point seems to be that you get all the schlocko clichés of Hollywood horror but filtered through a Japanese sensibility. When you move them back to America, what you’re mostly left with is the clichés. The Ring Two is a sequel to the 2002 film The Ring, which was an Americanised version of the 1998 Japanese film Ringu, which had its own 1999 sequel Ringu 2, with which The Ring Two has no discernible connection, other than that it’s directed by the original Japanese director of the original Ringu, Hideo Nakata.

Got that? Well, don’t worry. The original Ringu/Ring was about a video that brings death to whomsoever watches it, unless they manage to unload it on to someone else within seven days. It’s like a chain letter with production values. That sounds a passably cool hook, though not as nifty as the one in a Nick Hornby short story I read a couple of years ago. I’m a huge non-fan of Hornby but the premise of ‘Otherwise Pandemonium’ — a secondhand video recorder that’s pre-recorded the terrible future — is a zillion times better than Nakata’s foray into the same territory. Nonetheless, The Ring Two’s prologue is effective: a creepy guy (Ryan Merriman) tries to get his dimwitted date to watch the video in order to save his own life. It’s almost Hitchcockian in the way it sets up the situation and then leaves the viewer to supply the terror.

Well, okay, that’s not true. It’s not in the least bit Hitchcockian. But it is a lot better than anything else that follows. Plucky gal reporter Rachel Keller (played by Naomi Watts) is back, having fled to the small coastal town of Astoria, Washington, to get beyond the reach of the vengeful video. As lying low goes, that seems a bit halfhearted: in her situation, I’d have headed for somewhere where video players are thinner on the ground — rural Chad or up-country Tajikistan. But Miss Keller has settled for a gig as editor of a weekly newspaper and, whaddayaknow, in time-honoured sequel fashion it starts happening all over again.

Except that, after a desultory half-hour, it doesn’t. Nakata simply drops the video hook and moves on to more general horrors, which boil down to the old b-&-b routine: basements and bathwater. Oh, no! She’s left her beloved kid in the malevolent bath with the tap running! Oh, no! She’s going into the basement and he’s keeping the camera on her as she comes down the steps, which is a sure sign something’s lurking down there! C’mon, lady, haven’t you seen a horror movie before? You were in one, for cryin’ out loud.

But on it goes, albeit in a somewhat trance-like state. Elizabeth Perkins and Sissy Spacek both turn up, though sadly not in a lesbian nude scene. There’s a sequence where a bunch of deer attempt a kind of carjacking, which I was rather looking forward to almost as much as a bit of soft-focus lesbianism. Alas, I was disappointed on all fronts. I hit a huge buck on the road a couple of winters back and his horns heading straight for me through the glass were a lot scarier than the sedately staged equivalent here. I’ve no idea what the deer attack meant, unless it’s some kind of unintentional sub-text: Nakata only did the film for the bucks? Oh, well. The film did so well in its opening weekend in America he’s probably already contractually obligated to The Ring Three.

A couple of footnotes to 1980s Hollywood left us in recent days: John DeLorean looked like an old-school matinée idol, and should have been one. If he’d been cast as the James Coburn type in a Sixties spy spoof and then graduated to playing Blake Carrington on Dynasty, he could hardly have ended up worse off than he did by the time the automobile business was through with him. Instead, his fabulous sports car with the gull’s wing doors became the movie star in the Back to the Future pictures. It looks great, like a fullsize Gerry Anderson model for Lady Penelope when Parker has the day off, or a Star Wars runabout, if George Lucas had any style. Off-screen, like many movie stars, it didn’t function quite so well, and in the UK, alas, the name DeLorean is one of those half-forgotten echoes of the grim statist mire of pre-Thatcher Britain. In the end, the taxpayer sunk £77 million into a movie prop. Think how many Ken Loach films you could have made for that.

Bobby Short was a fixture at New York’s Café Carlyle for decades, best known for his interpretations of Cole Porter. I liked his Art Tatumesque piano playing, but, vocalwise, a little of his tremulous exuberance went a long way. Cabaret performers, particularly ones as popular with the carriage trade as he was, are often like that — a tad too special for mass consumption. But Woody Allen managed to work him into one perfect movie moment. In Hannah and her Sisters, he takes one of the eponymous siblings — the coke-addled Diane Wiest along to the Carlyle to sit slumped at the table, twitching, snorting and bored out of her skull, through Short’s rendition of ‘I’m In Love Again’. Afterwards, out on the sidewalk, a disgusted Woody tells her, ‘You don’t deserve Cole Porter.’ Not many of us do. And, after Everyone Says I Love You, I’m not sure Woody does. As for Melinda and Melinda, even Bobby Short couldn’t have saved that.