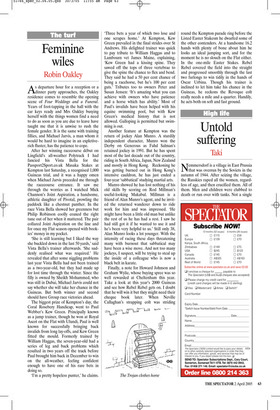 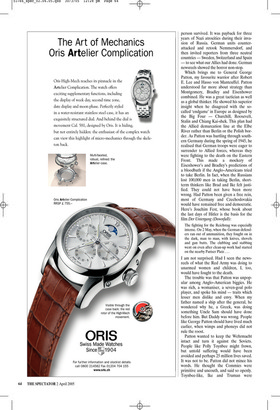 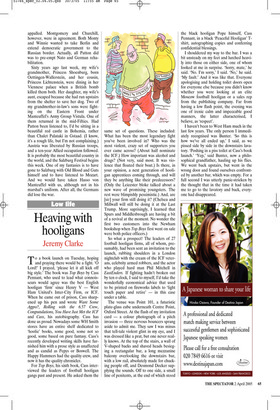 Nemmersdorf is a village in East Prussia that was overrun by the Soviets in the autumn of 1944. After seizing the village, the Russkies raped all the women, regardless of age, and then crucified them. All of them. Men and children were clubbed to death or run over with tanks. Not a single person survived. It was payback for three years of Nazi atrocities during their invasion of Russia. German units counterattacked and retook Nemmersdorf, and then invited reporters from three neutral countries — Sweden, Switzerland and Spain — to see what our Allies had done. German newsreels showed the horror non-stop.

Which brings me to General George Patton, my favourite warrior after Robert E. Lee and Hasso von Manteuffel. Patton understood far more about strategy than Montgomery, Bradley and Eisenhower combined. He was a great tactician as well as a global thinker. He showed his superior insight when he disagreed with the socalled ‘endgame’ in Europe as designed by the Big Four — Churchill, Roosevelt, Stalin and Chiang Kai-shek. This plan had the Allied demarcation line at the Elbe River rather than Berlin or the Polish border. As Patton was hurtling through southern Germany during the spring of 1945, he realised that German troops were eager to surrender to Allied forces, whereas they were fighting to the death on the Eastern Front. This made a mockery of Eisenhower’s and Bradley’s predictions of a bloodbath if the Anglo–Americans tried to take Berlin. In fact, when the Russians lost 100,000 men in taking Berlin, shortterm thinkers like Brad and Ike felt justified. They could not have been more wrong. Had Patton been given a free rein, most of Germany and Czechoslovakia would have remained free and democratic. Here’s Joachim Fest, whose book about the last days of Hitler is the basis for the film Der Untergang (Downfall):

The fighting for the Reichstag was especially intense. On 2 May, when the German defenders ran out of ammunition, they fought on in the dark, man to man, with knives, shovels and gun butts. The clubbing and stabbing went on even after clean-up work had started on the nearby Pariser Platz ...

I am not surprised. Had I seen the newsreels of what the Red Army was doing to unarmed women and children, I, too, would have fought to the death.

The trouble was that Patton was unpopular among Anglo–American biggies. He was rich, a womaniser, a seven-goal polo player, and spoke his mind — traits which lesser men dislike and envy. When my father named a ship after the general, he wondered why he, a Greek, was doing something Uncle Sam should have done before him. But Daddy was wrong. People like George Patton should have lived much earlier, when wimps and phoneys did not rule the roost.

Patton wanted to keep the Wehrmacht intact and turn it against the Soviets. People like Polly Toynbee might frown, but untold suffering would have been avoided and perhaps 25 million lives saved. It was not to be. Patton did not mince his words. He thought the Commies were primitive and uncouth, and said so openly. Toynbee-like, Ike and Truman were appalled. Montgomery and Churchill, however, were in agreement. Both Monty and Winnie wanted to take Berlin and extend democratic government to the Russian border. Actually, all Patton did was to pre-empt Nato and German rehabilitation.

Sixty years ago last week, my wife’s grandmother, Princess Shoenburg, born Oettingen-Wallerstein, and her cousin, Princess Lichtenstein, were dining in her Viennese palace when a British bomb killed them both. Her daughter, my wife’s aunt, escaped because she had run upstairs from the shelter to save her dog. Two of my grandmother-in-law’s sons were fighting on the Eastern Front under Manteuffel’s Army Group Vistula. One of them returned in the mid-Fifties. Had Patton been listened to, I’d be sitting in a beautiful red castle in Bohemia, rather than Chalet Palataki in Gstaad. (I know, it’s a rough life, but I’m not complaining.) Austria was liberated by Russian troops, and a ten-year Allied occupation followed. It is probably the most beautiful country in the world, and the Salzburg Festival begins this week. One of my fantasies is to have gone to Salzburg with Old Blood and Guts himself and to have listened to Mozart. And we would have taken Hasso von Manteuffel with us, although not in his marshal’s uniform. After all, the Germans did lose the war.