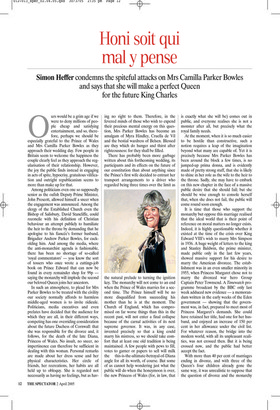 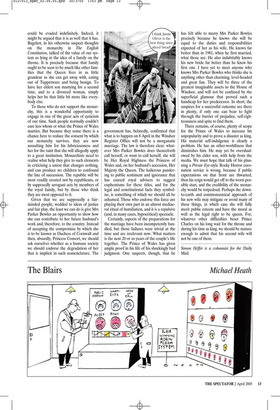 Simon Heffer condemns the spiteful attacks on Mrs Camilla Parker Bowles and says that she will make a perfect Queen for the future King Charles Ours would be a grim age if we were to deny millions of people cheap and satisfying entertainment, and so, therefore, perhaps we should be especially grateful to the Prince of Wales and Mrs Camilla Parker Bowles as they approach their wedding day. Few people in Britain seem to welcome the happiness the couple clearly feel as they approach the regularisation of their relationship. However, the joy the public finds instead in engaging in acts of spite, hypocrisy, gratuitous vilification and outright republicanism seems to more than make up for that.

Among politicians even one so supposedly senior as the oafish Deputy Prime Minister, John Prescott, allowed himself a sneer when the engagement was announced. Among the clergy of the Established Church even the Bishop of Salisbury, David Stancliffe, could reconcile with his definition of Christian behaviour an attempt publicly to humiliate the heir to the throne by demanding that he apologise to his fiancée’s former husband, Brigadier Andrew Parker Bowles, for cuckolding him. And among the media, where the anti-monarchist agenda is fashionable, there has been no shortage of so-called ‘royal commentators’ — you know the sort of tossers who once wrote a cuttings-job book on Prince Edward that can now be found in every remainder shop for 99p saying the monarchy will implode the second our beloved Queen joins her ancestors.

In such an atmosphere, to plead for Mrs Parker Bowles to be treated with the civility our society normally affords to harmless middle-aged women is to invite ridicule. Politicians, media executives and even prelates have decided that the audience for which they are all, in their different ways, competing has one overriding consideration about the future Duchess of Cornwall: that she was responsible for the divorce and, it follows, for the death of the late Diana, Princess of Wales. No insult, no sneer, no impertinence can therefore be sufficient in dealing with this woman. Personal remarks are made about her dress sense and her physical characteristics. Her circle of friends, her recreations, her habits are all held up to obloquy. She is regarded not necessarily as having no feelings, but as hav ing no right to them. Therefore, in the fevered minds of those who wish to expend their precious mental energy on this question, Mrs Parker Bowles has become an amalgam of Myra Hindley, Cruella de Vil and the bestial wardress of Belsen. Blessed are they which do hunger and thirst after righteousness: for they shall be filled.

There has probably been more garbage written about this forthcoming wedding, its participants and its effects on the future of our constitution than about anything since the Prince’s first wife decided to entrust her transport arrangements to a driver who regarded being three times over the limit as the natural prelude to turning the ignition key. The monarchy will not come to an end when the Prince of Wales marries for a second time. The Prince himself will be no more disqualified from succeeding his mother than he is at the moment. The Church of England, which has compromised on far worse things than this in the recent past, will not enter a final collapse because of the carnal activities of its next supreme governor. It was, in any case, invented precisely so that a king could marry his mistress, so we should take comfort that at least one old tradition is being maintained. A few people with pews to fill, votes to garner or papers to sell will milk the this-is-the-ultimate-betrayal-of-Diana angle for all its worth, of course. But some of us cannot help wondering just what the public will do when the honeymoon is over, the new Princess of Wales (for, in law, that is exactly what she will be) comes out in public, and everyone realises she is not a monster after all, but precisely what the royal family needs.

At the moment, when it is so much easier to be hostile than constructive, such a notion requires a leap of the imagination beyond what many are capable of. Yet it is precisely because Mrs Parker Bowles has been around the block a few times, is no jumped-up prima donna, and is evidently made of pretty strong stuff, that she is likely to shine in her role as the wife to the heir to the throne. Sadly, she may have to embark on this new chapter in the face of a massive public desire that she should fail; but she should be wise enough to console herself that, when she does not fail, the public will come round soon enough.

It is time that those who support the monarchy but oppose this marriage realised that the ideal world that is their point of reference on moral matters no longer exists. Indeed, it is highly questionable whether it existed at the time of the crisis over King Edward VIII’s wish to marry Mrs Simpson in 1936. A huge weight of letters to the king and Stanley Baldwin, the prime minister, made public only in the last few years, showed massive support for his desire to marry the American divorcee. The establishment was in an even smaller minority in 1955, when Princess Margaret chose not to marry the divorced war hero Group Captain Peter Townsend. A Timewatch programme broadcast by the BBC only last week adduced new evidence — a memorandum written in the early weeks of the Eden government — showing that the government was, in fact, prepared to meet most of Princess Margaret’s demands. She could have retained her title, had one for her husband, and enjoyed an increase of 150 per cent in her allowance under the civil list. For whatever reason, the bridge into the modern world, with all its unpleasant realities, was not crossed then. But it is being crossed now, and the public had better accept the fact.

With more than 40 per cent of marriages ending in divorce, and with three of the Queen’s four children already gone the same way, it was unrealistic to suppose that the question of divorce and the monarchy could be evaded indefinitely. Indeed, it might be argued that it is as well that it has. Bagehot, in his otherwise suspect thoughts on the monarchy in The English Constitution, talked of the value of our system as lying in the idea of a family on the throne. It is precisely because that family ought to be seen to be much like other families that the Queen lives in as little grandeur as she can get away with, eating out of Tupperware and being benign. To have her eldest son marrying for a second time, and to a divorced woman, simply helps her be that little bit more like everybody else.

To those who do not support the monarchy, this is a wonderful opportunity to engage in one of the great acts of cynicism of our time. Such people normally couldn’t care less whom or what the Prince of Wales marries. But because they sense there is a chance here to reduce the consent by which our monarchy survives, they are now assaulting him for his lubriciousness and her for the taint that she will allegedly apply to a great institution. Monarchists need to realise what help they give to such elements in criticising a union that changes nothing, and can produce no children to confound the line of succession. The republic will be most readily created not by republicans, or by supposedly arrogant acts by members of the royal family, but by those who think they are most opposed to it.

Given that we are supposedly a fairminded people, wedded to ideas of justice and fair play, the least we can do is give Mrs Parker Bowles an opportunity to show how she can contribute to her future husband’s work and, therefore, to the country. Instead of accepting the compromise by which she is to be known as Duchess of Cornwall and then, absurdly, Princess Consort, we should ask ourselves whether as a humane society we should endorse the degradation of her that is implicit in such nomenclature. The government has, belatedly, confirmed that what is to happen on 8 April in the Windsor Register Office will not be a morganatic marriage. The law is therefore clear: whatever Mrs Parker Bowles does thenceforth call herself, or want to call herself, she will be Her Royal Highness the Princess of Wales and, on her husband’s accession, Her Majesty the Queen. The ludicrous pandering to public sentiment and ignorance that has caused royal advisers to suggest euphemisms for these titles, and for the legal and constitutional facts they symbolise, is something of which we should all be ashamed. Those who endorse this farce are playing their own part in an almost mediaeval ritual of humiliation, and it is a repulsive (and, in many cases, hypocritical) spectacle.

Certainly, aspects of the preparations for the marriage have been incompetently handled, but those failures were trivial at the time and are irrelevant now. What matters is the next 20 or so years of the couple’s life together. The Prince of Wales has given ample proof in his life of his shockingly bad judgment. One suspects, though, that he has felt able to marry Mrs Parker Bowles precisely because he knows she will be equal to the duties and responsibilities expected of her as his wife. He knows far better than in 1981, when he first married, what those are. He also indubitably knows his new bride far better than he knew his first one. I have yet to meet anyone who knows Mrs Parker Bowles who thinks she is anything other than charming, level-headed and great fun. They will be three of the greatest imaginable assets to the House of Windsor, and will not be confused by the superficial glamour that proved such a handicap for her predecessor. In short, the auspices for a successful outcome are there in plenty, if only one can bear to fight through the barrier of prejudice, self-righteousness and spite to find them.

There remains, of course, plenty of scope for the Prince of Wales to increase his unpopularity and to prove a disaster as king. His material self-indulgence is clearly a problem. He has an other-worldliness that diminishes him. He may yet be overshadowed by his elder son, with help from the media. We must hope that talk of his planning a Private Eye-style Rocky Horror coronation service is wrong, because if public expectations on that front are thwarted, then his reign would get off to the worst possible start, and the credibility of the monarchy would be torpedoed. Perhaps the downto-earth and commonsensical approach of his new wife may mitigate or avoid many of these things, in which case she will fully merit public esteem and have the moral as well as the legal right to be queen. For, whatever other difficulties beset Prince Charles on his long wait for the throne and during his time as king, we should be mature enough to admit that his second wife will not be one of them.

Simon Heffer is a columnist for the Daily Mail.