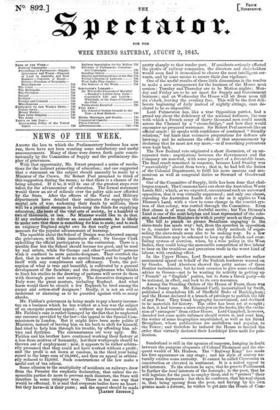 AMONG the lees to which the Parliamentary business has now run, there have not been wanting some satisfactory and useful ' announcementa. Many of these were drawn forth quite consti- _tutioliallyby the Committee of Supply and the preliminary dis- play Of grievances. With that opportunity, Mr. Ewalt proposed a series of resolu- tions for theindirect promoting of education ; and one suggested that a statement on the subject should annually be made by a Minister Of the Crown. Sir Robert Peel promised to think of this Suggestion during the recess ; so that there is a chance of its being ,adopted. - If it be, it will be one of the greatest steps ever -taken for the advancement of education. The formal statement would throw an air of ridicule over the paltry aids now afforded by the State. After the officers of the Naval and Military departments have detailed their estimates for supplying the mortal arts of war, reckoning their funds by millions, there will be a practical sarcasm in reckoning the funds for supplying education, the basis of the vital arts of society, by a hundred or two of thousands, or less. No Minister would like to do that. If any undertake to deliver an annual statement, he is likely to make sure that there is something for him to state; and to such an exigency England might owe its first really great national measure for the popular advancement of learning. The squabble about the School of Design was rehearsed among the grievances, with little immediate effect ; Sir George Clerk upholding the official participators in the contention. There is a terrible fear lest the School should become too good, and be used by real artists, while- Sir George and other "practical" persons wish it confined to mere pattern-designers. They overlook the fact, that in matters of taste no special branch can be taught by itself with any completeness and efficiency. Taste, the per- teption of what is .true and beautiful, is cultivated by a general -development of the faculties ; and the draughtsman who thinks to limit his studiekto the drawing of patterns will never do them with thorough gusto and mastery. The decorative designers of Italy were the great masters, including Raphael. And what harm would there be should a few Raphaels be bred among the carpet and cotton-staff designers ? Really, it is not an evil so imminent or alarming as to be guarded against with so many checks.

Mr. Fielden's grievances in being made to pay a heavy income- tax on a business which he has worked at a loss was the subject of an energetic personal appeal ; without any favourable result. .Mr. Fielden s case is rather damaged by the fact that he neglected one resource provided by the law—the appeal to the Special Com- missioners in London. But it might have been more politic if Ministers, instead of leaving him on his back to shift for himself, had tried to help him through his trouble, by affording him ad- vice and facilities. The circumstances are very ugly. Mr. Pielden and his brother have continued working their factory at a loss from metives of humanity, lest their workpeople should be thrown out of employment now, it appears to'be father arbitra- rily, presumed that they 'could not have worked without a profit; and the proff- is set down at random, in the third year being raised to the large sum of 24,0001., and then on appeal as arbitra- idly reduced to 12,000/. Such constructions of the law make a useful sort of tax odious.

Some allusion to the multiplicity of accidents on railways drew from the Premier the emphatic. declaration, that unless the re- sponsible parties do more to prevent such disasters, the State will mterfere in some stringent. Way. There is but one way that would be effectual. It is said that corporate bodies have no heart: but they have—it in their purse ; and the appeal should be made

pretty sharply to that tender part. If accidents seriously affected the profits of railway companies, the directors and shareholders would soon find it economical to choose the most intelligent ser- vants, and by some means to secure their due vigilance.

One of the useful results of these little discussions is the resolve to make a new arrangement for'the business of the House next session : Tuesday and Thursday are to be Motion nights ; Mon- day and Friday are to be set apart for Supply. and Government business and on Wednesday: the House will sit from noon till six o'clock, leaving the evening free. This will be the first deli- berate beginning of daily instead of nightly sittings, once de.. dared to be so impossible. Lord Palmerston has, like a true Opposition patriot, had a grand say about the deficiency of the national defences, the ease with which a French army of thirty thousand men could march across the Channel by a "steam-bridge," and how they would encounter no prepared resistance. Sir Robert Peel answers like an official oracle : he speaks with confidence of continued "friendly relations," but hints that extensive preparations for defence are brewing; and he enhances the effect of that announcement by declaring that he must not say more,—as if something portentous were kept back. The New Zealand vote originated a short discussion, of an un- expected turn : negotiations between the Government and the Company are renewed, with some prospect of a favourable issue. The final result remained in suspense because Lord Stanley was "unavoidably" absent from town ; that is, he had left the duties of the Colonial Department, to fulfil his more onerous and lite- mentous as well as congenial duties as Steward of Goodwood

Races. - - Out of the Committee of Supply, little has been done that chal- lenges remark. The Commons have cut short the Australian Waste Lands Bill ; which, as we expected, encountered such an untoward opposition, that it was virtually suppressed ; and only one clause, repealing the Australian Lands Act so far as it applies to Van Diemen 's Land, with a view to some change in the convict sys- tem of that colony, was carried through the Committee. Even that clause is of more than doubtful merits ; bid Van Diemen's Land is one of the most helpless and least represented of the colo- nies, and therefore Ministers do with it pretty much as they please.

• The bill to punish -as pirates Brazilians engaging in the, slaVe-trade has made way : but; from the speeches m opposition to it, sounder views as to the most likely methods of super-: seding the slave-trade seem also to be making way. In a few years Ministers may be ashamed to keep up the foolish and ever- failing system of coercion, when, by a wise policy in the West Indies, they could bring the mercantile competition of free labour to bear on the troublous and precarious trade in the worst kind of labour, with crushing effect.

In the Upper House, Lord Beaumont made-another rather sentimental appeal on behalf of the Turkish borderers warred ort by Greeks. Lord Aberdeen showed the petty nature of these frontier turbulencies; but he took occasion to give some excellent advice to Greece—not to be wasting its activity in getting up " French" or " English" parties, but to form a Greek party—to be national, in effect, and look to its own resources.

Among the' StandingOrders of the House of Peers, there was rather a funny one. Mr. Edmund Curl, immortalized by Swift; published a scandalous life of Sheffield Duke of Buckingham; and the House declared it a breach of privilege to publish the life of any Peer.' They found biography inconvenient, and declined to be materials for history: The order has been set at nought; in fact, it had become a mere stale jest on the books, like the exclu- sion of ", strangers" from either House. Lord Campbell, however, dreaded lest some noble informer should revive it, and send him,- the writer of some biographies unpublished, as well as his friend Brougham, whose publications are multiform and popular, to the Tower; and therefore he induced the House to rescind the order that virtually declared their Lordships' lives unfit for pub- lication.