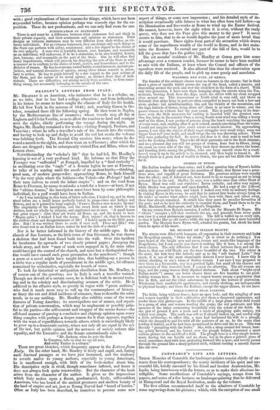 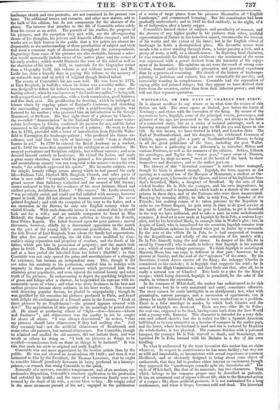 THESE Memoirs of Constable the landscape-painter consist chiefly of ex- tracts from his correspondence; the scanty incidents of his quiet and un- eventful life, briefly narrated by his friend and brother Academician, Mr. Leslie, being interwoven with the letters, so as to make their allusions in- telligible. Some recollections of Constable's sayings, scraps from his papers, and notes of a few lectures on landscape-painting that he delivered at Hampstead and the Royal Institution, make up the volume.

The first edition recommended itself to the admirers of Constable by some engravings from his pictures; which, with the exception of one small landscape sketch and two portraits, are not contained in the present vo- lume. The additional letters and extracts, and other new matter, add to the bulk of this edition, but do not compensate for the absence of the plates. The interest that attaches to the life of Constable arises solely from his career as an artist. The pursuit of his studies, the progress of his pictures, and the reception they met with, are the all-engrossing theme of his thoughts, his private and domestic affairs excepted ; and his works are so little known to the public that a few prints are almost in- dispensable to the understanding of those peculiarities of subject and style that form a constant topic of discussion throughout the correspondence. Engravings from some of his pictures are also desirable, because a selec- tion would necessarily include views of his native place and the scenes of his early studies ; which would illustrate the tone of his mind as well as the character of his style. Still, as materials for the biographer rather than a biography itself, this volume is not without interest ; and Mr. Leslie has done a friendly duty in paying this tribute to the memory of an estimable man and an artist of original though limited talent.

The events of Constable's life are soon told. He was born in 1776, at East Bergholt, in Suffolk; where his father was a wealthy miller. He was designed to follow his father's business, and did so for a year after leaving school ; when he was known as " the handsome miller,"—being tall, well-proportioned, and muscular, with a fresh complexion, good features, and fine dark eyes. His predilection for drawing, which he indulged at leisure times by copying prints of Raphael's Cartoons, and sketching the surrounding scenery in company with a neighbouring glazier, was fostered by his mother ; who procured him an introduction to Sir George Beaumont, at Dedham. His first sight there of a picture by Claude— the so-called "Annunciation" in the National Gallery—and some water- colour landscapes by Girtin, confirmed his passion for art, and his father consented to his adopting the profession of a painter. He went to Lon- don in 1795, provided with a letter of introduction from Priscilla Wake- field to Farrington the landscape-painter ; who predicted his future ex- cellence, and said that his style of landscape would "form a distinct feature in art." In 1799 he catered the Royal Academy as a student, and la 1802 his name first appeared in the catalogue as an exhibiter. He essayed portraiture and Scripture subjects., but without success ; and soon devoted himself entirely to landscape. He visited the Lakes, and made

a great many sketches, from which he painted a few pictures : but wild

and mountainous scenery was not congenial to his nature—to use his own words, "the solitude oppressed his spirits." His favourite subjects were the simple, homely village scenes among which he had passed his early life—Dedham Vale, Flatford Mill, 13ergholt Church, and other parts of what is now called "Constable's country." He never approached the grand nearer than Salisbury Cathedral and the mound of Old Sarum; scenes endeared to him by the residence of his most intimate friend and earliest patron, Archdeacon Fisher. "His nature," Mr. Leslie observes, "was peculiarly social, and could not feel satisfied with scenery, however grand in itself; that did not abound in human associations." He never quitted England ; and with the exception of his tour to the Lakes and a sea excursion to the Downs, he only saw English scenery when he visited friends. With such domestic tastes it was natural that he should look out for a with; and an amiable companion he found in Miss Bicknell, the daughter of the private solicitor to George the Fourth, then Prince Regent. The father frowned upon the poor painter; moved thereunto, however, chiefly by a determined opposition to the match on the part of the young lady's maternal grandfather, Dr. Rhudde, the rich Rector of East Bergholt, from whom the family had expectations. But after five years' courtship, the old folks were mollified by Con- stable's rising reputation and propriety of conduct, and the death of his father, which put him in possession of property ; and the match took place in 1816. Dr. Rhudde died soon after, and left the lady 4,0001.; and at a later period she inherited from her father's 20,0001.: so that Constable was not only spared the pains and mortifications of a struggle for existence, but became an independent man. This, though it did not relax his assiduity in his profession, enabled him to indulge with impunity in those peculiarities of manner which prevented him from attaining great popularity, and even injured the natural beauty and sober truth of his pictures. In endeavouring to depict the sparkling brightness of grass and foliage after a shower, he besprinkled his canvass with in- numerable spots of white ; and what was dewy freshness in his best and earliest pictures became sleety coldness in his later works. Not content with despising popular favour, lie gloried in unpopularity ; though he was gratified by the sensation his pictures produced in Paris, and heard with delight the exclamation of a French artist in the Louvre, "Look at these pictures by an Englishman !—the ground appears covered with dew." The appretiation of this quality in his paintings he prized above

all. He aimed at producing effects of "light—dew-.--breezes—bloom and freshness" ; and chiaroscuro was the quality in art lie sought for above all others. "I was always determined," he writes, "that my pictures should have chiaroscuro if they had nothing else." And they certainly had: not the artificial chiaroscuro of Rembrandt and some other old painters, but natural chiaroscuro. For Constable, though he admired and studied the old masters, did not imitate them, and was wroth at others for doing so. "I look on pictures as things to be avoided—connoisseurs look on them as things to be imitated." It was this that made his style so original and truly English.

Constable was not more appretiated by his brother artists than by the public. He was not elected an Academician till 1829; and then it was intimated to him by the President, Sir Thomas Lawrence, that he ought to consider himself peculiarly fortunate in being preferred to a history- painter,—a remark that stung Constable to the quick.

Naturally of a nervous, sensitive temperament, and of an anxious, ap- prehensive disposition, Constable's constant application to his profession had enfeebled his health ; and the cares of a numerous family were in- creased by the death of his wife, a severe blow to him. He sought relief in the more strenuous pursuit of his art ; engaged in the publication of a series of large plates from his pictures illustrative of "English Landscape," and commenced lecturing. But his constitution had been gradually undermined; and in 1837 he died suddenly, in the night, of a fit of indigestion after a hearty supper.

Constable's limited choice of subjects and peculiarity of manner, and the absence of any higher quality in his pictures than sober, truthful representation of Nature in her homeliest aspect, circumscribe the interest of his works and the extent of his fame; but in the English school of landscape he holds a distinguished place. His favourite scenes were meads with a river winding through them, a barge passing a lock, and a group of trees, a mill, or a church-tower. In depicting local character, he was remarkable for fidelity and vividness : the sentiment of the scene was expressed with a power derived from the intensity of his enjoy- ment of its beauties. His opinions on art were the result of strong con- viction, formed rather by intuitive perception and practical experience than by a process of reasoning. His sketch of the history of landscape- painting is judicious and correct, but not remarkable for novelty, and necessarily wanting in completeness.. Constable had the reputation of saying pithy and pointed things ; but they appear to have derived their force from the occasion, rather than from their inherent power; and they will not bear separate quotation.