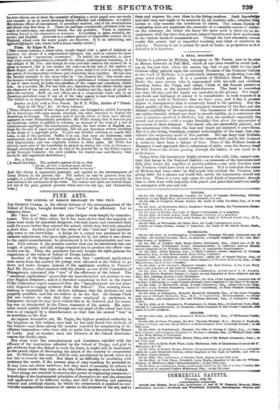 THE SCHOOL OF DESIGN BROUGHT TO THE TEST.

SIILGEOROB CLERK,., in his official detente of the misnumagement of the School of. Design, brought forward two "tests" of its efficiency. Let us examine them.

His "best test." was, that the prize designs werebought bymanufac- tunas. This is of little value; for it.bas been shown that the majority of these-were made by practised designers, who had learnt and exercised their craltior years before they entered the school, which they had only attended a short time. Another proof of the value of this "best test" has-incident- ally-come to our knowledge. A. design for a carpet was purohased.by an eminent upholsterer, who gave-eight guineas for it; but when it was shown to the carpet-manufacturer, he pronounced it to be impractiaahle and use- less: Five colours is the greatest number that can-be introduced into one length of pattern; and this design required ten to produce the eftbct—less would not do. Thus, the purchaser has-only bought for-eightguineas his experience- of the value of School of Design patterns.

Another of Sir George-Clerk's testa was, that "continual- applications were made from the country for young men, educated at the School to go down and make designs, instead, of, the applicants sending to France." And Mr. Hawes, when taunted with.hiasilenee as one of the Committee of Management; reiterated this "test" of the efficiency of the-Schad: The

eantinual applications" prove that. our manufacturers are anxious to em- ploy English designers; audit is therefore surprising to find in the report of the Committee regret expressed that the-" manufacturers are not gene- rally disposed to engage students from the, School." The seeming incon- sistency is> reconciled by the obvious inference that the students are not properly qualified; and this we believe to be the- fact. Sir George Clerk did._ not venture to state that they were employed in preference. to foreigners; though he may have wished this to be inferred, and his mean- ing was so interpreted in the Times summary of his speech. His state- ment would-equally hold good though not one pupil of the school had been sent to or engaged. by a manufacturer; so- that that his, second "test" is. as worthless as the first.

As regards decorative art, Mr. Pugin, the highest practical authority in the kingdom on this subject, says that he has only- found two students of the. School—and those among the number expelled for complaining of in- efficient instruction—who were able to assist him in decorating the House of Lords. And no wonder, since the Director of the School discounte- nances the-Gothic style But even were, the manufacturers and, decorators satisfied with the efficacy of the instruction afforded by the School of Design, and glad to get students from the School to work for them, it might still be inadequate to the grand: object of. developing the talent of the-country- in. ornamental art. Its failure in this respect will be only ascertained by proofs.when.it is too late to remedy the evil. But there is no difficulty in predicting with certainty the result, if- the present plan of copy-teaching be- persisted. in. It may turn out clever imitators; but they must of necessity be inferior to those whose works they copy; as he who follows another must. be-behind, Two things are essential to exercise the power of originatingornament,— knowledge of the fundamental principles of decorative art and the character and application of its different styles; and skill in drawing and painting natural and artificial objects, by which the ornamentist is enabled- te.con- vert the inexhaustible resources of nature-to the.purposea of his- art,. sail° ffirur and. express. his-- own ideas in the-fitting:median]. Sueh knowledg* and skill may and onglitto be acsuired.hy all students alike, whether tIL invent or only 'execute the inventions of others. The innate. f originating-does- not -supersede the necessity-of. a complete course .of studyn on the' contrary, the richer the fancy the more need. is there for an :lei quaintance with the laws that govern.naturalbeauties and their application to the various kinds-of ornamentalart. Though the beet- eelucatinn cannot confer this power; bad or imperfect teaching may-limit or misdirect- its activity. Training in art is potent for goector_liarml. in.proportion &title defective it is injurious.