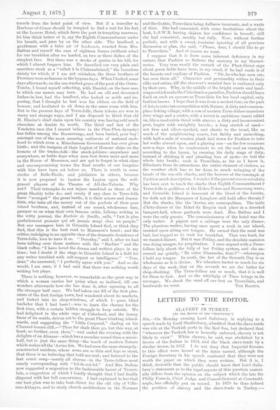 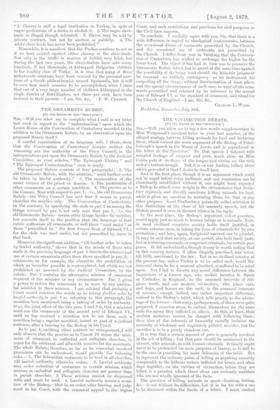 [TO TUN EDITOR OP THE I' SPECTATOR.") SI11,—On Monday evening Lord Salisbury, in replying to a speech made by Lord Shaftesbury, admitted that the slave-trade was rife at the Turkish ports in the Red Sea, but declared that "wherever the Turkish law is honestly enforced, slavery is not likely to exist." White slavery, he said, was abolished by a decree of the Sultan in 1854, and the black slave-trade by a similar decree, in 1857. I do not deny that Imperial firmans to this effect were issued at the dates named, although the Foreign Secretary in his speech confessed that they were not worth the paper on which they wore written. But it is, I think, desirable that the public should know that Lord Salis- bury's statement as to the legal aspects of this question materi- ally differs from the opinion on the subject which the late Sir Philip Francis, Chief Judge and Consul-General at Constanti- nople, has officially put on record. In 1870 he thus defined the position of slavery and the slave-trade in Turkey

" 1. Slavery is still a legal institution in Turkey, in spite of vague professions of a desire to abolish it. 2. The negro slave- trade is illegal, though tolerated. 3. Slaves may be sold by private contract, but not by auction or publicly. 4. The white slave-trade has never been prohibited."

Meanwhile, it is manifest that the Pashas continue to act as if no laws existed against either slavery or the slave-trade. Not only is the traffic in negroes at Jeddah very brisk, but during the last two years, the slave-dealers have sold many hundreds, if not thousands, of kidnapped Bulgarian children to the wealthy class of Turks. It is true that many of these unfortunate creatures have been rescued by the personal exer- tions of a Greek philanthropist named Spanoudis, but it will be seen how much remains to be accomplished, when I state that out of a very large number of children kidnapped in the single district of Eski-Zaghra, not three per cent, have been restored to their parents.—I am, Sir, &c., F. W. CIrxssoN.