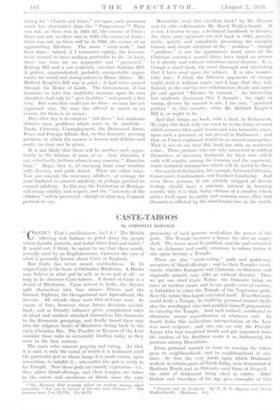 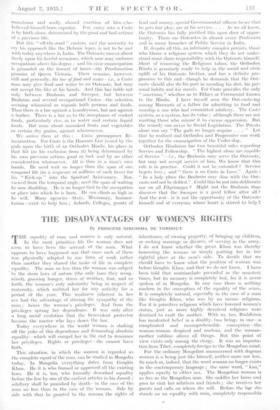 " CIASTE ? That's snobbishness, isn't it ? The British ‘,..) allowing rich Indians to grind down the people whoth Gandhi protects, and'forbid them food and water." It would not, I think, be unfair to say that these words, actually used by an Englishwoman, represent the sum of what is generally known about Caste in England.

But Caste has never Meant snobbishness. In its origin Caste is the basis of Orthodox Hinduism: A Hindu may believe in what god he will, or in no god at all : so long as he observes Caste-taboes. A denial of Caste is a denial of Hinduism. Upon arrival in India, the Aryans split theinselves into four claSseS—Priests and the learned, Fighters; the Occupational and Agricultural, the Servers. All outside these were Out-of-Caste men. In course of time, however, these Aryan divisions crystal.. lized ; and as Priestly influence grew, complicated rules of ritual and conduct attached themselves' like barnacles to the Economic grouping's, and finally found their way into the religious books of Hinduism dating back to the early Christian Era. The Pundits or Keepers of the Law Consider these rules as inexorably binding today as they were in the first century. The main rules concern praying and eating. An idol, it is said, is only the metal of' s'vhich it is fashioned until the particular god in whose image it is made comes, upon invocation, 'to inhabit it ; *hereafter the god is verily in his Temple. 'Now these gods are mostly Vegetarian—i.e., they abhor blood-offerings, and their temples are taboo' to the eaters and sacrificers of blOod, since the very answers were Yes, 29,178; No, '6,073. Walker-Smith. (Methuen. as.) proximity of such persons neutralizes the power of the gods. The Temple becomes a house, the idol an empty shell. The house must be purified, and the god entreated by an elaborate and costly ceremony to return before it can again become a Temple.

There are also " meat-eating " .gods and goddesses, acceptors of blood-offerings ; and to their Temples meat- eaters, whether European and Christian, or Outeaste „and. originally animist, may alike go without disaster. Thus we get our chief Caste Taboo—the Outeaste being an eater of unclean meats and in one grade even of carrion,. is forbidden, to enter the Temple of the Vegetarian gods. Now the taboo thus begun extended itself. If an.Outeaste; could defile a Temple, he could by personal contact defile also the worshipper who had. purified himself preparatory.

And such contact, accidental or to entering the Temple. otherwise, meant repurification at whatever cost. In. South India this. meticulous interpretation of the Law was most exigeant ; and one can see why the Priestly Aryan who had wandered South and got separated from the nucleus of his Brethren made it so, buttressing his position among Dravidians.

From personal contact en route to worship. the taboo, grew to neighbourhood, and to neighbourhood at any time. So that the very .roads upon which Brahmins walked, in certain.parts of South India, were denominated: Brahmin Roads and an Outcaste used them at his peril— the orbit of defilement being cited in cubits. Abbe Dubois_ and travellers of his age give examples of this *The Morning Past, recently asked its readers, among other monstrous and really absurd exaction of him-who- believed-himself-born-superior. For, entry into a Caste is by birth alone, determined by the good and bad actions of a previous life.

But this " off-the-road " custom, and the necessity to cry his approach like the Hebraic leper, is not to be met with today anywhere in India. The Outcaste moves about freely upon his lawful occasions, which now may embrace occupations above his degree and his civic emancipation is grounded on the firmest of bases—the Proclamation Promise of Queen Victoria. There remains, however, still and generally, the bar of fbod and water—i.e., a Caste man may give food and water to an Outcaste, but may not accept the like at his hands. And this bar holds not only between Brahmin and Sweeper, but between Brahmin and several occupational Castes—the. selection seeming whimsical as regards both persons and foods. Thus there is a bar against a laundryman, but not against a barber. There is a bar as to the acceptance of cooked foods, particularly rice, as to water and certain liquid foods. But none about uncooked fruits and vegetables or certain dry grains, against whomsoever.

We arrive then at this : Caste presupposes Re- incarnation. For Caste is the Honours List issued by the gods upon the birth of an Orthodox Hindu, his place in that list (as his exclusion from it) being determined by his own previous actions good or bad, and by no other consideration whatsoever. All is thus in a man's own hands. He need wait no longer than the span of one temporal life (in a sequence of millions of such lives) for his " Kick-up " into the Spiritual Aristocracy. Nor, viewed from the temporal angle, need the span of waiting be now disabling. He is no longer tied to the occupation or place into which lie is born. He can climb as high as lie will. Many agencies—State, Missionary, humani- tarian—exist to help him ; Schools, Colleges, grants of land and money, special Governmental officers to sec that he gets fair play, arc at his service. . . . As we all know, the Outcaste has fully justified this open door of oppor- tunity. There are Outcastes in almost every Profession and in many branches of Public Service in India.

If, despite all this, an inferiority complex persists, those who blame a religious system which they do not under- stand must share responsibility with the Outcasts.

Short of removing the Religious taboo, the Orthodox Hindu is genuinely ready to help in the social and civic uplift of his Outcaste brother, and has a definite pro- gramme to this end—though he demands that the Out- caste should also do his part in mending his diet, his per- sonal habits and his morals. For Caste provides the only " sanctions," whether as to Ethics or Ceremonial known to the Hindu. I have myself seen the Out-caste-ing among Marwaris of a father for admitting to food and worship a son who had committed adultery. The Caste system, as a system, has its value ; although there are not wanting those who misuse it to excuse oppression. But the remedy can never be Social Legislation. The Priests alone can say "The gods no longer require . . " Let that be realized and Orthodox and Progressive can work together for the emancipation of the Under-dog.

Orthodox Hinduism has two beautiful rules regarding Service and Fellowship. " The highest alone are capable of Service "--i.e., the Brahmin may serve the Outcaste, but may not accept service of him, We know that this rule is in practice. Could it not be extended ? Service begets love ; and " there is no Caste in Love." Again : " In a holy place the Brahmin may dine with the Out- caste and not be defiled." Could this be put into deliberate use on all Pilgrimages ? Might not the Brahmin thus discover that the Sweeper is a good fellow after all ? And the rest-1S it not the opportunity of the Outcaste himself and of everyone whose heart is stirred to help