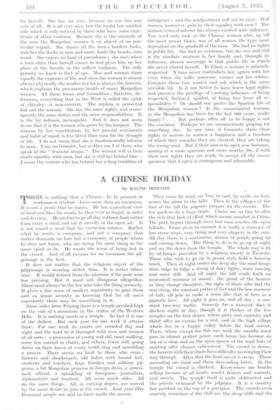 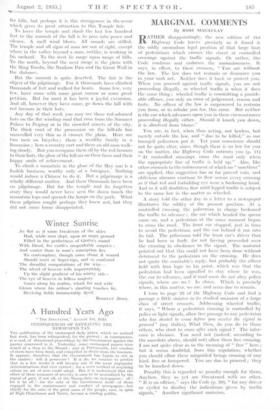 THERE is nothing that a Chinese—be he peasant or workman or student—loves more than an excursion. It is not a picnic that lie wants. He has a practical view of food and likes his meals, be they ever so frugal, in order and decency. • He prefers to go all day without food rather than carry a meal and eat it messily in the open air. It is not round a meal that his excursion rotates. Rather what he wants is company, and not a company that makes demands on him but a company of people whom he does not know, who are doing the same thing in the same spirit as he. He wants the sense of being lost in the crowd. And of all excuses for an excursion the pil- grimage is the best. • It does not matter that the religious object of the pilgrimage is wearing rather thin. It is rather other- wise. It would detract from the pleasure if the gods were too pressing. But it must not disappear altogether. There must always be the few who take the thing seriously. It gives a fine sense of modern superiority to pass them and an ironic security in knowing that for all one's superiority there may be something in it.

Some miles from Peiping there is a temple perched high on the side of a mountain in the centre of the Western Hills. It is nothing much of a temple. In fact it is one of the dullest. But each year for one week it attains fame. For one week its courts are crowded day and night and the road to it thronged with men and women of all sorts ; a procession of young and old, most walking, sonic few carried in chairs, and others, fewer still, going down on their knees at every tenth step and mumbling a prayer. There seems no limit to those who come ; farmers and shopkeepers, old ladies with bound feet, students and teachers, large families and solitary pil- grims, a fat Mongolian princess in foreign dress, a promi- nent official, a sprinkling of foreigners—journalists, diplomatists and teachers. All seem much alike. All do the same things. All, in varying degree, are moved by the same desire to join in the crowd. Last year fifty thousand people are said to have made the ascent. They come by road, on 'bus, in cart, by cycle, on foot, across the plain to the hills. :Then in the villages at the foot of the hill the pilgrims prepare for the ascent. The tea gardens do a busy trade. Chairs are on hire to offer the rich that lack of effort which means comfort in China. The path begins through trees but soon reaches the open hillside. From plain to summit it is really a staircase of low stone steps, very tiring and very slippery in the rain. All day there is a continuous stream of people going up and coming down. The thing to do is to go up at night and see the dawn from the temple. The whole way is lit by oil-lamps, provided by a religious society in Tientsin. Those who Wish to go up in grand style hold a burning torch. Then at night under the deep sky the road hangs from ridge to ridge a string of fairy lights, some moving and most still. And all night the hill sends forth an unwonted murmur of sound : the grunt of the bearers as they change shoulders, the sighs of those who find the way steep, the constant patter of feet and the low murmur of talk, all join to make a noise like that of bees in a gigantic hive. All night it goes on, and all day ; a con- stant two-way traffic. Scarcely for a moment does it slacken night or day, though it is thicker at the few temples on the first slopes, where piety and curiosity and' a rest, and in the high village thirst offer an excuse for Which lies in a happy valley below the final ascent. There, where except for this one week the months must' pass in almost perfect peace, each house has become an inn or a shop and on the. open spaces of the road huts of matting offer cleaner enticement. The crowd is dense;' the bearers with their chairs have difficulty in swinging their way through. After that the final ascent is steep. Those ascending are tired and those descending loiter. In the temple the crowd is thickest. Everywhere are booths selling favours of all kinds, scarlet flowers and' animals, • and sweets. The temple itself is .quite obliterated and the priests swamped' by the pilgrims. It is a country • fair perched on the top of a precipice. The crowds seem scarcely conscious of the chill air, the steep cliffs and the • far hills, but perhaps it is this strangeness in the scene Which gives its great attraction to this Temple fair.

To leave the temple and climb the, last few, hundred feet to the summit of the hill is to pass into peace and silence. A snell wind blows. All sounds are stilled, The temple and all signs of man are out of sight, except 'where in the valley beyond a man, antlike, is working in. Ills orchard. To the west lie range upon range of hills. To the north, beyond the next range is the . plain with the Ming Tombs, the Nankow Pass and the Great Wall in the distance.

But the. summit is quite deserted. The fair is the. Object of the pilgrimage. For it thousands have climbed' thousands of feet and walked for hours. Some few, very few, have come with some great sorrow or some great petition. But for most it has keen a joyful excursion. And all, however they have come, go down the hill with red favours in their hats: Any day of that week you may see these red-adorned hats on the flat winding road that runs from the Summer: Palace to Peiping or in the crowded streets of the city. The thick cord of the procession on the hillside has unravelled very thin as it crosses the plain. Here are two men on bicycles ; there a wealthy family in a limousine ; here a country cart and there an old man walk- ing slowly. But you recognize them all by the red favours' in their hats, the glow of the hill air on their faces and their happy smile of achievement..

To climb a mountain in the glare of the May sun is a foolish business, worthy only of a foreigner. Nothing would induce a Chinese to do it. But a pilgrimage is a wholly different matter. And these thousands have been on pilgrimage. But for the temple and its forgotten story they would never have seen the dawn touch the mountain tops and quench the lamps on the path. What these pilgrims sought perhaps they knew not, but they did not come home disappointed.