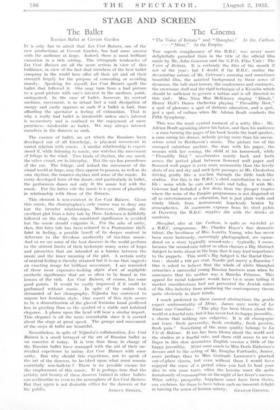 STAGE AND SCREEN The Ballet

IT is only fair to admit that Les Cent Raisers, one of the new productions at Covent Garden, has had some success with the audience at large. Indeed, there is most brilliant execution in a rich setting. The retrograde tendencies of Les Cent Raisers arc all the more serious in view of this brilliance, in view of the fact that members of the best ballet company in the world here offer all their art and all their strength largely for the purpose of concealing or avoiding inanity. Speaking for myself, Les Cent Baisers spoilt the ballet that followed it. One may turn from a bad picture to a good picture with one's interest in the medium, paint, unimpaired. In the case of ballet, however, its central medium, movement, is in actual fact a vast dissipation of energy and easily appears as such if a ballet is bad, thus affording the spectator a feeling of exhaustion. That is why a really bad ballet is intolerable unless one's interest is momentary and is confined' to the enjoyment of mere prettiness—intolerable as ballet. We may always interest ourselves in the dancers as such.

The essence of ballet, an art which the Russians have developed out of all knowledge, is physical movement in varied relation with music. A similar relationship is experi- Oced if, while listening to music, one watches the movement of foliage in the wind. Two kinds of rhythm, the one aural, the other visual, arc in interplay. Mit the eye has precedence of the ear. The foliage, and indeed the movement of the visual world at large, may then appear to possess, as well as its own rhythm, the counter-rhythm and sense of the music. In every developed form of the dance, and particularly in ballet, the performers dance not only to the music but with the music. For the latter role the music is a system of plasticity in relationship with those of the dancers.

This element is non-existent in Les Cent Raisers. Given this music, the choregrapher's only course was to deny any but the broader relationships. Moreover, although the excellent plot from a fairy tale by Hans Andersen is faithfully followed on the stage, the emotional significance is avoided lest the music should vulgarize it. For the sake of unity, then, this fairy talc has been reduced to a Pantomime idyll, faint in feeling, a parable bereft of its deeper content in deference to the frivolous mediocrity of , tea-time music. And so we see some of the best dancers in the world perform to the utmost limits of their technique many series of leaps and pirouettes that are intended as a barrier between the music and the inner meaning of the plot. A certain unity of neutral feeling.is thereby attained but it is one that suggests an exacting. image for brilliant movement. I am reminded of. , those most expensive400king objets d'art, of negligible aesthetic significance that are so often to be found in the houses of the rich. Les Cent Raisers, of course, has some good points. It would be vastly improved if it could be performed without.. music. In spite of the unfair task demanded of her choregraphy, Nijinska has contrived to impose her feminine style. One aspect of this style seems to, be a dramatization of the gloved feminine hand proffered less in greeting than as the symbol of a stable and habitual elegance. A plume upon the head will bear a similar import. This elegance is all the more remarkable since it is carried about the stage at great speed. The groups and movement of the corps de ballet arc beautiful.

Nevertheless, in spite of Nijinska's collaboration, Les Cent Raisers is a small betrayal of the art of Russian ballet as we conceive it today. It is true that those in charge of the Russian ballet have managed With the aid of their un- AValled experience to imbue Les Cent Raisers with some unity. But why should this experience, not to speak of the art of the dancers, be lavished upon what must remain essentially non-balletic ? There is no possible excuse for the employment of this music. It is perhaps true that the artistry and beauty of these dancers trained in other ballets can acclimatize us even to the atmosphere of Les Cent Raisers. But that again is not desirable either for the dancers or for