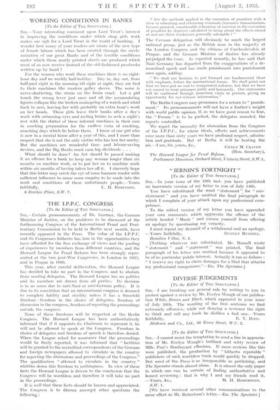 [To The Editor of THE SPECTATOR.] Sin,In your issue. of the 19th inst. you have published an inaccurate version of my letter to you of July 14th.

You have substituted the word "statement" for ." mis-' statement " and you have• omitted the final paragraph in which I complain of your attack upon my professional com- petence.

To the edited version of my letter you have appended your own comments which aggravate the offence of the article headed " Music " and excuse yourself from offering an apology by questioning my veracity. I must repeat my demand of a withdrawal and an apology.

[Nothing whatever was substituted. Mr. Russell wrote "statement " and " statement " was printed. The final paragraph of his letter was omitted because it appeared to be of no particular public interest: Actually it ran as follows : " I reserve my right to claim damages for a libel that attacks my professional competence."—ED. The Spectator.]