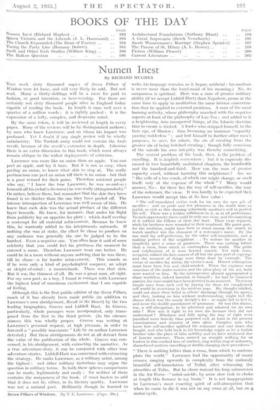 'Tins week sixty thousand copies of Seven Pillars of Wisdom were let loose, and will very likely be sold. But not read. Many a thirty-shillings will be a mere fee paid to fashion, or good intention, or hero-worship. For there are certainly not sixty thousand people alive in England today capable of reading the book. In length it runs well over a qUarter of a million words : it is tightly packed : it is the expression of a lofty, complex, and desperate mind.

By the same token, it will be reviewed at length in every paper. Many of the reviews will be by distinguished authors ; by men who knew Lawrence, and on whom his impact was profound. Yet I doubt if any single review will be wholly satisfactory. The Turkish army -could, not contain the A rah revolt, because of the revolt's extension in depth. Likewise there is an extra dimension to this book, which must always remain oblique to the widest deployments of criticism.

Lawrence was more like an onion than an apple. You can peel an apple, and lay it bare. But it is not. so easy, when peeling an onion, to know what skin to stop at. The really pertinacious can peel an onion till there is no onion—but that is a poor reward for their pains. Therefore mistrust people who say, I knew the true Lawrence, he was so-and-so beneath all his (what's-its-name) he was really (thingumabob)." Or rather, believe them, but remember that the skin they have found is no thicker than the one they have peeled off. The .intense introspection of Lawrence was well aware of this. He knew that each skin was the actual product of the different layer beneath. He knew, for instance, that under his flight from publicity lay an appetite for glory ; which- itself overlay a contempt for all material achievement. Because he knew this, he wantonly added to his integuments outwards. If nothing else was at stake, the effect he chose to produce on any audience was generally the . one he judged to be the hardest. Even a negative one. You often hear it said of some celebrity that you could feel his greatness the moment he entered a room. Therefore Lawrence went one better. He could be in. a room without anyone noticing that he was there, till he chose—a far harder achievement. This sounds as if he were only a kind of psychological conjurer, an adept at sleight-of-mind : a mountebank. There was that skin. But it was the thinnest of all. He was a great man, all right. For my own part, as a boy, I found in contact with Lawrence the highest kind of numinous excitement that I am capable of feeling.

Although this is the first public edition of the Seven Pillars, much of it has already been made public (in addition to Lawrence's own abridgement, Revolt in the Desert) by the two leading biographies, Graves and Liddell Hart. In Graves, particularly, whole passages were incorporated, only trans- posed from the first to the third person. (In the circum- stances this was wholly proper. Graves was writing at Lawrence's personal request, at high pressure, in order to forestall a " possibly inaccurate " Life by an author Lawrence

the strategy. He ranks Lawrence, as a military artist, among the highest and Other military historians may argue the question in military terms. In both these spheres comparisons can be made, legitimately and easily ; for neither of them contains the uniqueness of the book. (I must hasten to add that it does not lie, either, in its literary quality. Lawrence was not a natural poet. Brilliantly though he learned to Seven Pillars of Wisdom. By T. E. Lawrence. (Cape. 30s.) write, his language remains, as it began, artificial : his medium is never more than the hand-maid of his meaning.) No, its uniqueness is spiritual. Here was a man of greater military ability (if we accept Liddell Hart) than Napoleon, prone at the same time to apply to meditation the same intense concentra- tion that he applied to external problems. A man of the most burning activity, whose philosophy marched with the negative aspects at least of the philosophy of Lao Tsu ; and added to it a heightening, into incorporeal things, of the Islamic doctrine that to create is Wicked. A leader who stripped himself, to the bare ego, of illusion ; thus becoming an immense "capacity yawing rudderless " ; and lent himself to further other men's purposes, to save, for others, the sin of creating from the greater sin of being botched creating ; though fully conscious of the suicide his own integrity was thereby committing.

The central problem of the book, then, is the problem of excelling. It is implicit; every where ; but it is expressly dis- cussed in two beautifully 11111(1 ilated chapters, the hundredth and the hundred-and-third, How can the man of greater capacity excel, without harming this neighbours ? Arc WO " like cells of a bee-comb, of which one might change, or swell itself, only at the expense of the whole " ? Many would answer, No : for there lies the way of self-sacrifice, the way of the redeemer, the vicar. It was hardly to be expected that Lawrence would accept this at its face value : " The self-immolated viefim took for hia own the rare gift of sacrifice ; and no pride and few pleasures in the world were so joyful, so rich as this choosing voluntarily another's evil to perfect the self. There was a hidden selfishness in it, as in all perfections. To each opportunity there could bo only one vicar, and the snatching of it robbed the fellows of their duo hurt. Their vicar rejoiced, while his brethren were wounded in their manhood. His purer part for the mediator, might have been to stand among the crowd, to watch another win the cleanness of a redeemer's name. By the "one road lay self-perfection, by the other self-immolation, and a making perfect of the neighbour. . . To endure for another in simplicity gave a sense of greatness. There was nothing loftier than a cross, from which to contemplate the world. The pride and exhilaration of it were beyond conceit. Yet each cross, occupied, robbed the late-corners of all but the poor part of copying: and the meanest of things wore those done by example. The virtue of sacrifice lay within the victim's soul. Honest redemption must have been free and child-minded. When the expiator was conscious of the under-motives and the after-glory of his act, both were wasted on him. So the introspective altruist appropriated a share worthless, indeed harmful, to himself ; for had he remained passive, his cross might have been granted to an innocent. To rescue simple ones from such evil by paying for them his complicated self would be avaricious in the modern man. He, thought-riddled could not share their belief in others' discharge through his agony, and they, looking on him without understanding, might feel the shame which was the manly disciple's lot : or might fail to feel it, and incur the double ptiniKkiinent of ignorance. Or was this shame, too, a self-abnegation, I o be admitted and admired for its own sake ? How was it right to let men die because they did not understand ? Blindness and folly aping the way of right wore punished more heavily than purposed evil, at least in the present consciousness and remorse of man aliVe. Complex men who knew how self-sacrifice uplifted the redeemer and cast clown the bought, and who held back in his knowledge might so let a foolish brother take the place of false nobility and its later awakened due of heavier sentence. There seemed no straight walking for us leaders in this crooked lane of conduct, ring within ring of unknown, shamefaced motives cancelling or double-charging their precedents.".

" There is nothing loftier than a cross, from which to contem- plate the world." Lawrence had the opportunity of many crosses, ranging upwards in complexity from the curiously beautiful self-immolation of Tallal, after witnessing the atrocities at Tafas. But he chose instead his long submersion in the Air Force—" mind-suicide, by some slow task to choke at length this furnace in my, brain." It is not inappropriate to Lawrence's most exacting spirit of self-abnegation that when he came to die it was not on any cross at all, but on IA motor-cycle.