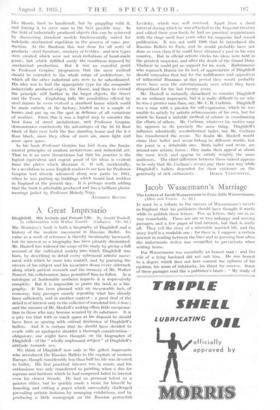 Diaghileff. His Artistic and Private Life. By Arnold Haskell.

In collaboration with Walter Nouvel. (Gollancz. I2s. 6d.) MR. HAss-e.i.L's book is both a biography of Diaghileff and a history of the modern movement in "Russian Ballet. Its value. as a work of reference is thereby inestimably increased; but its interest as a biography has been pitiably diminished. Mr. Haskell has widened the scope of his study by giving a full account of the cultivated society into which Diaghileff was born, by describing in detail every ephemeral artistic move- ment with which he came into contact, and by pursuing the careers of his subject and his associates down every sidetrack along which patient research and the memory of Mr. Walter Nouvel, his collaborator, have permitted him to follow. As a catalogue of fashionable aesthetic impacts it is impressively complete. But it is impossible to praise the book as a bio- graphy. It has .been planned with an inexcusable lack of economy, long passages merely repeating what has already been sufficiently said in another context ; • a great deal of the detail is of interest only to the collector of anecdotal brie- à-brac and' the manner of Mr. Haskell's writing offers little compensa- tion to those who may become wearied by its substance. It is a pity too that with so much space at his disposal he should have been so sparing with critical. discussion of Diaghileff's ballets. And it is curious that he should have decided to evade with an apologetic shudder a thorough consideration— obligatory, one might have thought, on the biographer of Diaghileff--of the " wholly unpleasant subject!' of Diaghileff's attitude towards sex.

We think of Diaghileff now only as the gifted impresario who introduced the Russian Ballets to the capitals of western Europe, though considerably less than half his life was devoted to ballet. His first practical interest was in music, and his

enthusiasm was. only transferred to painting when a duo for soprano and baritone which he had composed failed to interest

even his closest friends. He had no' personal talent as a painter either, but he quickly made a name for himself by founding and editing a paper which successfully challenged prevailing artistic fashions, by arranging exhibitions, and by producing a little monograph on the Russian portraitist Levitsky, which was well received. Apart from a short interval during which he was, attached to the Imperial theatres and edited their year-book, he had no practical acquaintance with the stage until four years after his magazine had ceased publication. It was not until 1000 that he introduced the Russian Ballets to Paris, and he would probably have not done so even then if he could have obtained a post in his own country. But in official artistic circles his ideas were held in the greatest suspicion, and after the death of the Grand Duke Vladimir he could get no support for his work. Balletornauee who reproach Russia for its lack of appreciation of Diaghileff should remember that but for the indifference and opposition of influential Russians at this period they would probably never have seen the entertainments over which they have rhapsodized for the last twenty years.

Mr. Haskell is naturally disinclined to consider Diaghileff as an ordinary impresario, but it is really difficult to see why he was a greater man than, say, Mr. C. B. Cochran. Diaghileff was a man with a passion for self-expression, which he was unable to satisfy by artistic achievements of his own, but for which he found a suitable method of release in coordinating the efforts of others. Mr. Cochran, whatever his motive may be, appears to do precisely the same thing. Diaghileff'm influence admittedly revolutionized ballet, but Mr. Cochran has transformed the revue. No doubt Mr. Haskell would claim that ballet and revue belong to different worlds, but the point is a debatable one. Both ballet and revue are second-rate artistic forms : they make their appeal at about the same level, and appear to satisfy roughly the same audiences. The chief difference between them indeed appears to be only that Mr. Cochran's revues pay their own way while Diaghileff's ballets depended for their existence on the